The Toshiba AT100 (sold as the Toshiba Thrive in the US) is the latest Tegra 2 Android tablet to come from one of the world's big tech companies.

In the world of iOS and Android tablets, it's often not a question of having all of the best features.

Sometimes, having a few unique and well-targeted offerings can help you carve out a niche.

That's especially true of the Toshiba AT100. While it seems like yet another Android 3.1 tablet that might suffer the same fate as the ill-conceived HP TouchPad – which has now been discontinued – the AT100 does offer some appeal for more advanced, technically-minded users after customisation options and high benchmark scores.

Both the HP TouchPad and the Toshiba AT100 are a bit bulky and heavy. Yet, the AT100 differentiates itself from the Apple iPad 2. 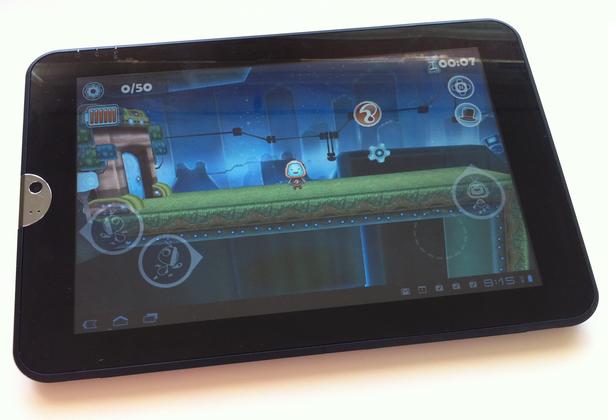 It has full-size ports for HDMI, USB and SD cards – no adapters required, and no "micro" anything. The rear camera snaps photos at 5MP.

The rear cover snaps off – there are optional back covers available in five colours – so you can gain access to remove the battery.

Most importantly, enterprising individuals who snap the back cover off will find there are actual screws you can remove and... well, let's just say the Toshiba AT100 is friendlier to potential customisation.

Weighing 725g, the Toshiba AT100 is a bulky monster. That's 160g heavier than the lightest of the light Samsung Galaxy Tab 10.1. Some users might appreciate the heft though, and the back cover has a snake-skin pattern that's easy to grip.

You can imagine pulling out the Samsung Galaxy Tab 10.1, at 8.6mm thick, and seeing everyone squint to see it in profile. The Toshiba AT100 is big and bold at 15.7mm – a hair thinner than the Apple MacBook Air.

The Toshiba AT100's 10.1-inch screen has a 16:10 aspect ratio at 1280 x 800 pixels resolution. Toshiba touts its Resolution+ technology, designed to make videos snap. Yet, the screen is not nearly as bright or colourful as the Samsung Galaxy Tab 10.1 and looks a bit washed out compared to the iPad 2.

The Toshiba AT100 8GB version costs $400 in the US, which is the same as the Asus Eee Pad Transformer. We tested the 16GB version of the tablet, which costs $430. Toshiba hasn't yet announced a UK launch price, though the UK release date is 1 September 2011.