Samsung has outed its latest tablet, the Samsung Galaxy Tab 2 (7.0), the Ice Cream Sandwich successor to the original Galaxy Tab model from 2010. Built around a 7-inch 1024 x 600 PLS LCD display, the new Galaxy Tab 2 has a 1GHz dual-core processor paired with 1GB of RAM, along with WiFi and a 3-megapixel rear facing camera.

There are several signs that this is a budget model, targeting the entry-level in Samsung’s expansive tablet line-up. For a start, the main camera is fixed-focus, and has no LED flash; the front-facing camera, meanwhile, is VGA resolution rather than the more typical 1.3-megapixel or above. It’s also 10.5mm thick, not vast in the grand scheme of things, but still chubbier than other recent slates Samsung has produced.

That comparative heft is used to accommodate WiFi, Bluetooth 3.0, A-GPS and – likely optional – HSPA+ connectivity. There’s also either 16GB or 32GB of internal storage, plus a microSD card slot for augmenting that. A 4,000 mAh battery rounds things out, though Samsung isn’t saying how long that should last for. 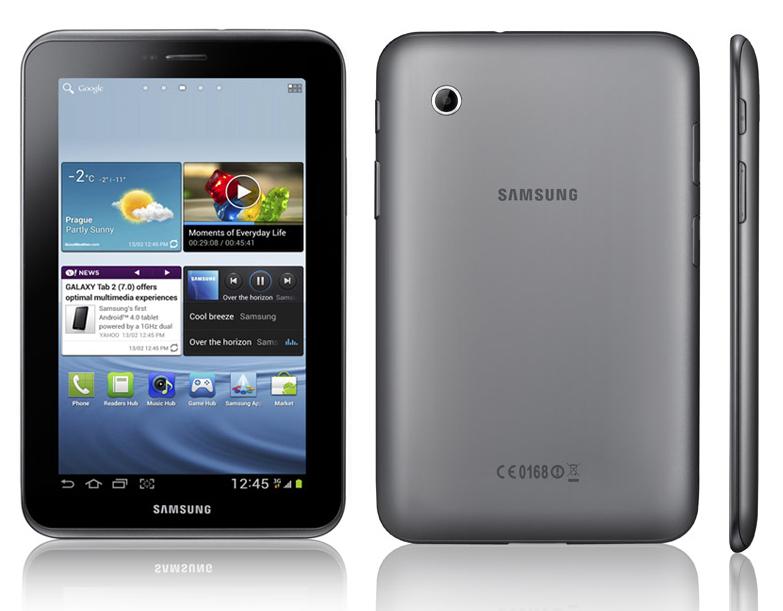 Software, meanwhile, is Android 4.0 Ice Cream Sandwich – the first Samsung slate to come preloaded with ICS, it seems – with TouchWiz modifications, the various content hubs, ChatON IM app, KIES Air and DLNA support. Pricing is unconfirmed, as is availability, though we’re assuming the Galaxy Tab 2 will be cheaper than the Galaxy Tab 7.0 Plus.