The Galaxy Chromebook is the snobbiest of the two, demanding nearly $600 for its stunning 4K display and built-in S Pen. Its successor, on the other hand, is more attainable, but it lacks the flashiness and flair of the OG Galaxy Chromebook.

The Galaxy Chromebook 2 doesn’t sport the dazzling, AMOLED panel of its predecessor nor does it come with a snazzy stylus, but it prides itself on being a budget-friendly Chromebook that won’t burn a hole through your wallet. “I don’t need all the bells and whistles to win people over,” the Galaxy Chromebook 2 said in our pre-battle interview. “Unlike the old Galaxy Chromebook, I offer people a lot of bang for their buck!”

Exhibiting anger that’s befitting of its tomato-red chassis, the first-generation Galaxy Chromebook grabbed the microphone and said, “A cheap hunk of junk offering nothing more than cheap shots — shocker! I’ll see you in the ring!”

Let’s get ready to rumble! In this fierce face-off, you’ll watch the two Galaxy Chromebooks go head to head in several vicious rounds, allowing you to get a good idea of which Chrome OS system is best for you.

The price of the first-generation Galaxy Chromebook came down significantly from its cringeworthy launch price of $999. It now starts at $549 and comes with an Intel Core i5-10210U CPU, 8GB of RAM, a 256GB SSD, and a 13.3-inch, 4K AMOLED display. This is the only configuration available.

The Galaxy Chromebook is only $50 more than its successor, and offers more storage and a better processor. 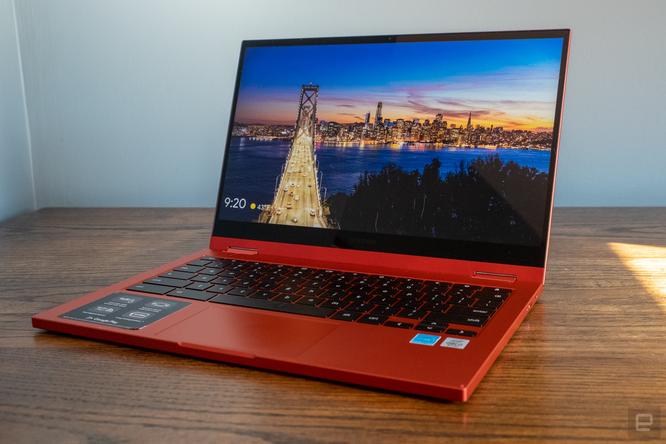 Cover your ears! Colors don’t make noise, but let me tell you, the fire-engine red hue on both Chromebooks is loud. The striking chassis reminds me of the ruby red cape matadors use to attract bulls, or the unforgettable scarlet dress Cameron Diaz wore in The Mask. The intense color also reminds me of that fiery, inner rage we all feel when someone eats our delicious leftovers.

Besides the Fiesta Red spunk, both Chromebooks share similar lid designs with a silver Samsung logo placed on the center-left and a subtle, gray Chromebook insignia on the top-left. Thanks to the dual, 360-degree hinges, the Chromebook duo can transform into your favorite modes, including tablet and tent. Keep in mind, though, that the hinges on both laptops aren’t the sturdiest.

Open the lid and you’ll finally spot some significant differences between the two. The Galaxy Chromebook’s keyboard mimics the chassis’ blood-red finish, which isn’t ideal for visually impaired users. The white letters and symbols contrast poorly with the red keys. Samsung heard our complaints about the dizzying keyboard loud and clear. This time, the Korean-based tech company opted to go with a black-keyboard-on-red-deck design, providing better visibility for hunt-and-peck typists.

The Galaxy Chromebook 2 is also slightly thicker and heavier (12 x 8 x 0.6 inches, 2.7 pounds) than its predecessor (11.9 x 8 x 0.4 inches, 2.4 pounds). Armed with a stylus garage, a fingerprint reader and a more compact form factor, the OG Galaxy Chromebook wins this round.

Both Chromebooks are stingy with their ports.

The second-generation Galaxy Chromebook has the same I/O options, but they’re placed in different spots. On the left side, there are three ports: USB Type-C, a headset jack and a microSD slot. On the right is another USB Type-C port.

This is going to be a good one! Both Chrome OS devices have standout 13.3-inch displays: the first-generation Galaxy Chromebook has a 4K AMOLED panel while its successor boasts that it’s the world’s first QLED-equipped Chromebook.

Samsung also launched the world’s first QLED Windows laptop (Galaxy Book Flex 15). So what, exactly, is QLED and why should you care about it? Well, it’s a power-efficient yet radiant and vivid display that doesn’t drain too much battery. QLED won’t blow you away like 4K, but it’s still a visual treat.

According to our colorimeter, both Chrome OS systems surpassed the DCI-P3 color gamut coverage of the average Chromebook (70%). With a score of 159%, the Samsung Galaxy Chromebook’s 4K panel unsurprisingly covers more ground on the DCI-P3 color space than its successor’s QLED display (84%).

The Galaxy Chromebook 2, outputting 390 nits, is brighter than its predecessor, which emanates 357 nits. Although the second-generation Chromebook has the edge, both laptops are pretty dim; their displays will be difficult to see on bright, sunny days.

Of course, the OG Galaxy Chromebook wins this round — it has a 4K display for goodness sake.

The Galaxy Chromebook 2’s deck is a bit of a bore. As mentioned, it has black keys with white symbols that contrast well with the red chassis, and lacks some of its predecessor’s cool features (a fingerprint scanner and a world-facing camera).

The island-style keyboards on both Chromebooks are shallow, but on the plus side, the keys have excellent tactile feedback and satisfying clickiness.

We put both Chromebooks through the wringer and flooded them with RAM-hungry Google Chrome tabs to test their multitasking capabilities. The Galaxy Chromebook held up slightly better than its predecessor, loading 20 Chrome tabs without a hitch. Its successor, on the other hand, exhibited a few seconds of negligible lag, then quickly caught up with our workflow.

The first-generation Galaxy Chromebook, emanating a 4K, AMOLED display, had no chance against its more power-efficient successor in our endurance battle.

The Galaxy Chromebook lasted a measly 5 hours and 56 minutes on the Laptop Mag battery test, which involves continuous web surfing over Wi-Fi at 150 nits. Its successor lasted longer on a charge; it shut down after 8 hours and 18 minutes. However, both Chrome OS systems lack the endurance of the average Chromebook (9:31).

If you want a highly recommended Chrome OS system within the same price range as these red-hot Chromebooks, consider the Acer Chromebook Spin 713; it lasts nearly 12 hours on a charge and offers stellar performance.