If you've considered buying a router like this, you're looking for as much power as possible. The tri-band AXE11000 connection is second to none, with 4.8Gbps on the 5GHz and 6GHz bands plus another 1.2Gbps at 2.4GHz. These massive numbers are thanks to 160MHz support at both 5GHz and 6GHz, making the ROG Rapture GT-AXE11000 an absolute performance beast.

If you haven't seen 6GHz support show up on any of your devices, that's not surprising. Wi-Fi 6E saw the debut of these 6GHz bands, and so far, only a handful of phones support the new tech, as well as some high-end Windows 11 devices. 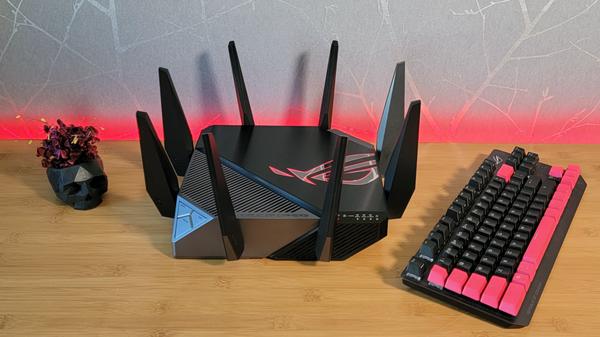 Still, Wi-Fi 6E is making its way into more new devices and will become one of the standard ways people connect to WI-Fi in the next few years thanks to the many more 160MHz channels available at this frequency. As people upgrade their devices, dependence on the overcrowded 5GHz spectrum will start to fall off. If you want to be ready, this is one of the best Wi-Fi 6E routers money can buy.