Review: Motorola’s Droid Turbo beats the Moto X in specs, if not style

Motorola's Moto line of phones has gotten plenty of praise from reviewers, including us—they're priced competitively and keep the superfluous features and Android skins to a minimum. If nothing else, Motorola's approach is a welcome respite from the everything-and-also-the-kitchen-sink approach of the market leader and many of its other competitors.

Motorola also makes another line of smartphones that has a longer history but gets less attention in the present day: the co-branded, Verizon-exclusive Droid phones that stretch all the way back to the original 2009 Motorola Droid. More recent, post-Google Droids from Motorola have been distant cousins to the Moto phones. They use many of the same components and value-added features, but Verizon's involvement means the software is more heavy-handed. The designs are more angular and "industrial" (for lack of a better word).

The Droid Turbo is the newest member of the Droid family and the follow-up to last year's Droid Ultra and Droid Maxx (whether we can expect a new Droid Mini is anyone's guess). The phones don't look much alike, but in many ways the Turbo is an amped-up, slightly more expensive version of the 2014 Moto X we reviewed earlier this year. So if you're a Verizon customer, should you stick to the standard Moto X, or does the Turbo add enough to be worth a look?

Visually, the Droid Turbo and the Moto X don't share many similarities. The most obvious is the front bezel, which is larger on the bottom to accommodate capacitive navigation buttons and a smallangled "chin" that extends below the metal rim surrounding the screen and bezel. The chin is covered by the same rubberized material used on the sides and back of the phone. The power button and volume rocker are on the right edge of the phone—in one of the Turbo's cooler design touches, the volume rocker actually pulls out to reveal the nano SIM tray, rather than using the standard pinhole-plus-tray design common in most smartphones.

Move around to the back of the Droid, and you'll find a 21MP camera flanked by dual flash LEDs instead of the "ring" flash used in the Moto X. There's also a small bump at the bottom of the phone where the Micro USB port is. Between the larger battery and the more powerful internals, the Droid Turbo is a little wider and taller than the Moto X and noticeably thicker all the way through. 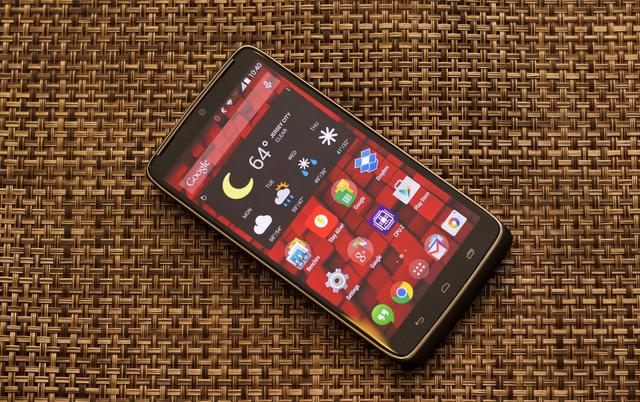 Finally, the Turbo comes in just a handful of different varieties, significantly fewer than you can get through Moto Maker for the Moto X. Ours is the "black ballistic nylon" version of the phone, which is just a bit thicker and heavier and has a soft-touch plastic back. The "metallic red" and "metallic black" options are thinner, but these don't come in a 64GB version.

Like the Moto X, the Droid Turbo's curved back feels pretty good in the hand, and the fit and finish is solid. There's no creaking or button jiggling going on, and the phone has a nice heft without feeling too heavy for its size (though it's heavier than the Moto X by over an ounce).

All things considered, the Moto X is the more attractive phone. It's lighter and sleeker, comes in a wide variety of different colors and materials, and it has a symmetry to it that the Droid Turbo lacks. By comparison, the Droid looks chunkier and mote utilitarian. It's a phone designed around its spec sheet—that's not intended as a slight, especially since those top-tier specs give the phone some of its best features.

Review: In its second generation, the Moto X becomes a true flagship

The Droid Turbo has a screen that's the same size as the one in the Moto X (5.2 inches diagonally) but uses a higher-resolution panel. At 2560×1440, this means it has about 565 pixels-per-inch, which is... a lot. An impractical amount.

There's really no sensible argument for a display of this resolution in any phone- or "phablet"-sized device, and there are a few factors (graphics performance and battery life, mainly) that argue against it. It's a nice-looking display with the normal AMOLED strengths and weaknesses—great contrast, sometimes oversaturated color, and greenish or purplish whites—but it's not visibly nicer-looking than the 1080p display in the Moto X. The strip of screen space you gain by going with capacitive buttons instead of on-screen ones makes a bigger difference. There are some places where these 500-PPI-and-up densities have visible benefits (virtual reality, for one), but a 5-inch smartphone isn't one of them.

Moving on, we get to the specs that really make the Droid Turbo stand apart from the Moto X and other flagships from earlier in the year. It's got a Snapdragon 805 SoC with an Adreno 420 GPU. The 805 uses four Krait 450 CPU cores that can hit a peak speed of 2.7GHz. Both the CPU and GPU are some of the fastest you'll find in any phone today, and it's a nice bump over the Snapdragon 800 and 801. However, as we'll see the Turbo's high-resolution screen absorbs most of the performance boost from the GPU.

Looking at the onscreen and offscreen charts tells you everything you need to know about the resolution race. Offscreen tests are all run at 1080p, showing you how much raw power each GPU has—you can see the 2013 Moto X's Snapdragon S4 is about half the speed of the 2014 Moto X's Snapdragon 801. The Droid Turbo's Snapdragon 805 is nearly twice as fast again as the 801.

Looking at the Onscreen tests, which are run at each panel's native resolution, shows that all games are going to run pretty much the same speed on all three phones. GPU speeds have improved by between 300 and 400 percent in a year and a half, but that's the bare minimum required to keep up with these ever-increasing resolutions. The iPhone 6's GPU is about the same speed as the Droid Turbo's, but its lower-resolution (but not low-resolution) screen means that games will feel about twice as fast on the iPhone, all else being equal. We could forgive this if the Droid Turbo's higher resolution was clearly beneficial to users; unfortunately, it isn't.

As for the CPU, we're looking at just a small increase from what you'll get in something like a Nexus 5, Galaxy S5, HTC One M8, or Moto X. Both single- and multi-core CPU performance has mostly leveled off after big gains throughout 2012 and 2013. We wouldn't expect this to change much until Qualcomm's first high-end 64-bit SoCs arrive in the first half of 2015. Those chips will be Qualcomm's first to use ARM's Cortex A57 and A53 CPU cores, and the Snapdragon 810 in particular should deliver the biggest boost since the move from the Snapdragon 600 to the Snapdragon 800 in mid-to-late 2013.

The phone's other specs are more than respectable. Storage speeds are good (it's not saddled with Lollipop's encryption-by-default, which is good for security but pretty dire for performance), and while Android and its apps don't really seem to need 3GB of RAM for anything, at least you'll be prepared for the future. 802.11ac Wi-Fi and Bluetooth 4.0 round things out.

Among all these high-end specs, the phone's 3900mAh battery is the best. The Moto X's battery life is probably the worst thing about it—it's not awful, but it's decidedly mediocre and far south of other Snapdragon 801 flagships like the Galaxy S5 and the HTC One M8. The Droid Turbo compensates for that flaw and then some, turning in battery life results that put it at the top of our charts. That said, claims of "48 hour battery life" are overly optimistic. Most of the time in real-world usage the Droid Turbo can go for a day-and-change, not two whole days.

To compensate for this big battery, the Droid Turbo's charger supports Qualcomm's Quick Charge 2.0 technology. Other phones released this year, including the M8, the new Moto X, and the Nexus 6, support the technology, but the Turbo is the first phone we've tested that actually includes a compatible charger.

When you're charging a battery, you need to maintain a balance between charging as fast as you can and overloading the hardware, which is part of the reason why your charging rate slows as you near a full charge. Quick Charge 2.0 still needs to slow down at the end of a charge, but if your battery is empty or near-empty it can deliver more power in less time. While charging both a 2014 Moto X and the Droid Turbo, the Quick Charge 2.0 charger draws a maximum of about 16.3W of power at the wall, compared to about 8W for the standard charger included with the Moto X.

For phones with larger batteries, Quick Charge 2.0 is going to be necessary to make them charge more like "normal" phones. If you use a standard charger, you'll be looking at more tablet-like recharge times.