Motorola's Droid Xyboard a slick, well-performing tablet that's easy on the eyes. Too bad it has such a stupid name.

The Android device, which runs on Verizon's 4G network and is available now in Verizon stores, is actually Motorola's second shot at the tablet game. The Xyboard is the company's follow-up to its pricey, not terribly popular Xoom tablet, which was released in February of 2011.

The design has been overhauled to match Motorola's newest mobile hardware – the tablet has clipped corners like the Droid Razr. The Xyboard comes in both 8.2-inch and 10.1-inch configurations, and on my 8.2-inch tester, the funky corners actually made it more comfortable to hold with one hand.

>The Xyboard will be eligible for an Ice Cream Sandwich upgrade at some point in the future, but for now, it runs Honeycomb. At least it does it well.

The back, too, shows some stylistic creativity in the industrial design department. A rubberized outer rim houses a power button and volume rocker, while centered in the back of the tablet is a sheet of dark gray anodized aluminum. The metal plate is held in place by six visible screws – think robot chic. The gummy edge makes it easy to prop the tablet up on a table or desk, or even those fold-out tray tables on the airplane.

While the positioning of the device's scant buttons makes for a clean appearance, it unfortunately leaves your fingers searching when it comes time to crank up the volume or put the thing to sleep. If each button had a raised icon, like plus, minus and power symbols, I think it'd be easier to use and wouldn't detract from the aesthetic. 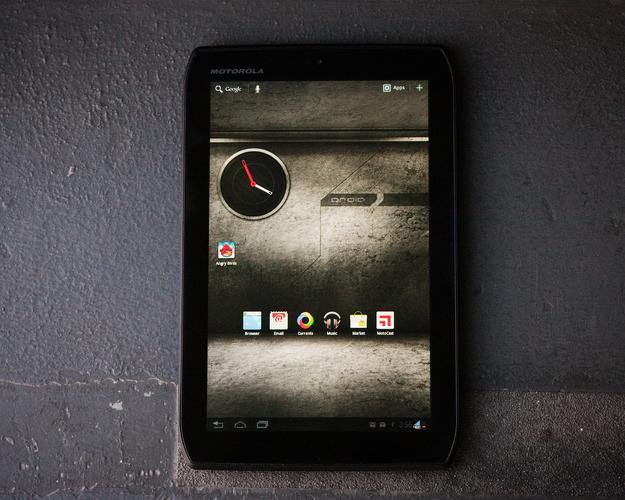 With most tablet manufacturers either going with a large 10-inch stunner, or the 7-inch "really big smartphone" design, the 8.2-inch size is welcome. It's a good compromise – small enough to wield in one hand with ease (the 0.86-pound weight helps too), yet large enough that watching a full-screen HD video is pleasant. Pair that with Verizon's 4G speeds, and you've got a great portable streaming video platform.

The tablet's overall experience is smooth, an improvement over many of the past iterations of Honeycomb, which I found to be rather buggy. Perhaps the software engineers just needed some time to stabilize things. Powered by a dual-core 1.2GHz processor with 1GB of RAM, app load times are swift. On-screen animations and swipes between screens within the Honeycomb interface are completely stutter-free.

Unlike HTC and Samsung devices, Motorola's tablet is not heavily skinned, so your Android OS experience is pretty close to what Google intended, rather than a bogged down, bloated mess. The Xyboard will be eligible for an Ice Cream Sandwich upgrade at some point in the future, but for now, it runs Honeycomb. At least it does it well.

The Xyboard 8.2 has a crisp, bright 1280 x 800 resolution display. The 10.1-inch model has the same resolution, but the 8.2-incher's screen has a higher pixel density. Unfortunately, that gorgeous, high-res screen eats up battery life. After turning up the brightness to the highest setting, the tablet's battery life dropped from around 20 percent to around 5 percent in less than an hour. You'll need to be conscious of your brightness settings if you don't want your tablet to die on you quickly. Watching a full length film like Terminator on my home Wi-Fi network on Netflix with brightness at about 80 percent, the battery level dropped from full to 50 percent by the movie's end.

If you're one of those people who likes to take pictures with their tablet (read: you are a dork), the Xyboard has a 5-megapixel back-facing camera and a 1.3-megapixel webcam on its face. The rear camera's quality is relatively sub-par compared to what you'd get from comparable cameras, and definitely shoddier than the 8-megapixel cameras standard on the current crop of smartphone handsets. The colors are bright and close to true to life, but the overall images lack sharpness when the flash isn't used. The camera has an assortment of adjustable settings – white balance, color effects, a scene mode – but it does a good job of picking out what's best for a shot when you leave everything on automatic. Video quality was also just "meh" – videos taken indoors were noticeably grainy.