The first generation of Dell’s Venue 8 tablet hit the market back in 2013. In January of this year the company launched the updated version that we have here, which comes with a faster Intel Atom X5 processor and 64-bit Windows 10 as standard.

So, how does this latest version measure up and is it a good option for business users?

The Venue 8 Pro is available as Wi-Fi only or you can have a mobile data connection too. It’s powered by a 2.4GHz Intel Atom X5 Z8500 – the old model had the 1.8GHz Z7340. You get 2GB of DDR3 RAM, a 64GB solid state hard drive and Wi-Fi as standard. Our review unit came with 4GB of RAM and the mobile data option, if you need more space, storage can be further expanded with a MicroSD card of up to 128GB. It’s worth noting that Dell uses eMMC storage – which is basically a built-in SD card – rather than a faster SSD disk.

The tablet measures 130 by 216mm and is only 9.45mm thick. At 377 grammes it gives an impression of solidity without feeling too weighty to carry around. The tablet has an 8-inch 1280 x 800 screen, a 5MP rear camera and 2MP front. The 5855 supports Miracast so you can wirelessly connect to compatible peripherals like screens and keyboards. The battery is a 19.5 WHr single cell unit.

You get a USB C cable and a mains adaptor in the package and, in attractive feature for business users, MS Office Mobile is included in the price, you can upgrade to the full versions with an Office 365 subscription. Security is taken care of with the Dell Data Protection software.

The Dell has a reassuringly solid feel and it should stand up well to the rigours of everyday business life. It comes with the Bamboo Paper digital notebook software that allows you to write and draw on the screen either with your finger or the optional stylus. 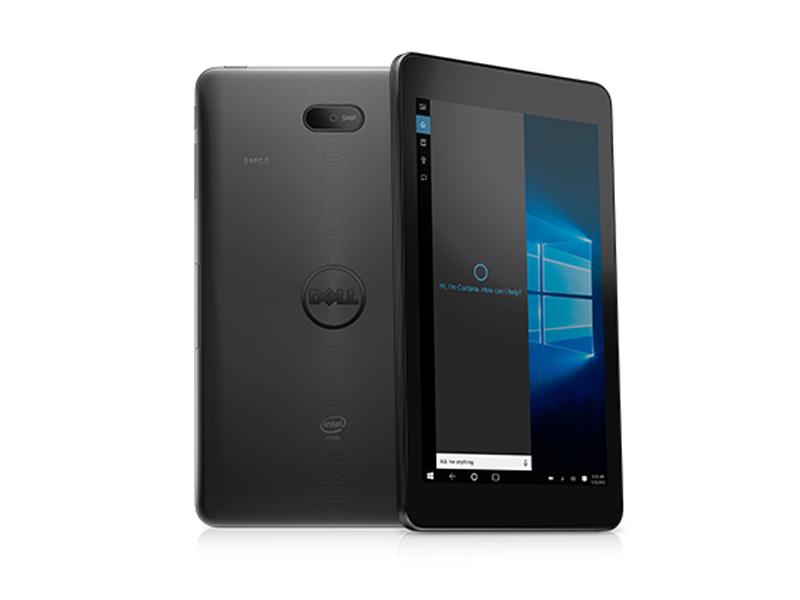 The fact that MS Office Mobile is included means you can start work almost as soon as you take it out of the box. You also get Dell’s Data Protection software which offers encryption and anti-malware features to keep your tablet and data secure. The Venue 8 Pro is also compatible with the Dell Client Command Suite, allowing IT departments to centrally manage BIOS and hardware configurations.

In addition you get access to Dell ProSupport Plus as an option, which helps identify and resolve problems and keep your hardware running smoothly. There’s the option of Protected Workspace too, this opens applications likely to be targeted by malware in a sandbox environment to guard against attacks.

There are a number of accessories that will be attractive to business users too, including a docking, station that supports keyboard, mouse and dual displays, a case called a ‘Folio’ that converts into a hands free stand, plus an active pen stylus for writing and drawing on the screen. You can also get an adaptor that gives access to HDMI, VGA, Ethernet and USB 3.0 via the USB-C port. Software options include Adobe Create Cloud, Photoshop Elements and Acrobat.

There’s a power switch on the top along with a headphone socket. The bottom edge has a USB C socket and speaker grille. On the right are the volume control and a hard Windows button plus a slot for SIM and memory cards. Because it’s USB C it’s less fiddly to connect as you don’t have to get the plug the right way around, but you’ll need to get an adaptor if you want to attach a flash drive or other standard USB peripheral.

The back has a ridged finish which makes it pleasant to grip, though it does tend to show finger marks. While the Venue 8 is nicely weighty it isn’t too heavy to hold one-handed. The rear camera is in a slightly raised panel in the centre of the back towards the top. You do tend to place your fingers over this if you’re holding the tablet landscape, so you’ll need to wipe it clean before taking photos. The back of the machine does get warm in use but not uncomfortably so. The performance of this tablet isn’t going to set the world on fire but it’s perfectly adequate for everyday tasks.

The screen has quite a wide bezel – especially on the short edges – but the viewing area itself is a good size. The screen itself offer 283 ppi pixel density (an improvement on the 189 ppi of the previous generation). What this means in practise is that it has crisp colours, good contrast and delivers smooth video playback. Viewing angles are good too so its possible for two people to watch the screen at the same time. It isn’t quite bright enough to cope with outdoor use on sunny days but that’s a minor quibble. There’s only a single speaker but it delivers decent sound quality.

The number of megapixels doesn’t tell the whole story with the rear camera, as although it’s ‘only’ 5MP it actually delivers pretty impressive results. There’s no flash but it takes good pictures in both daylight and artificial light. It uses the standard Windows 10 Camera app which is basic but functional. The 2MP front camera is good enough for VoIP calling.

The most disappointing aspect of the Venue 8 Pro is its battery life. Even in relatively light use, like visiting websites or viewing documents you’ll struggle to get more than five or six hours on a charge. Watch videos or play games and you’ll eat through the power reserves much faster.

At £366 for the 64GB version with mobile data as tested – you can get the 2GB Wi-Fi only version for £259 – the Venue 8 Pro may seem a little pricey. As a business machine though it looks like an attractive package. It’s solidly constructed, has a good range of practical hardware and software options, and it looks smart in an understated way.

If you can live with the rather disappointing battery life and you value reliability over performance, it’s well worth considering.