Microsoft has introduced the Surface Laptop Studio, and if you mistook it for a tablet with a trackpad stand, you'd be forgiven.

The device was the last to be announced during a launch that was live-streamed on Wednesday. The event hyped up Windows 11 Surface PCs that are set to ship from October 5.

At first, the Surface Studio Laptop looks like a normal notebook, though the touchscreen can be pulled out to form a tent that covers the keyboard and leaves just the trackpad visible. The display can then be flattened over the keyboard and trackpad to put it into full tablet mode.

The Surface Laptop Studio in its tent mode ... Click to enlarge. Source: Microsoft

The device has the firepower of a desktop with a quad-core 11th-generation Intel Core H-Series processor and Nvidia RTX 3050 Ti graphics chip, said Microsoft chief product officer Panos Panay during the webstream. Panos unexpectedly invoked Steve Ballmer, and also pitched the laptop as a system on which developers can write and test AI code for speech and image recognition applications.

Later in the livestream, Microsoft's partner program manager Scott Hanselman, wearing a t-shirt with "#include " emblazoned on it, demonstrated how the laptop could build and compile source code as fast as a modest desktop. The system, which succeeds the Surface Book range, can also be used with a pen, and might even appeal to some gamers, Redmond hopes. 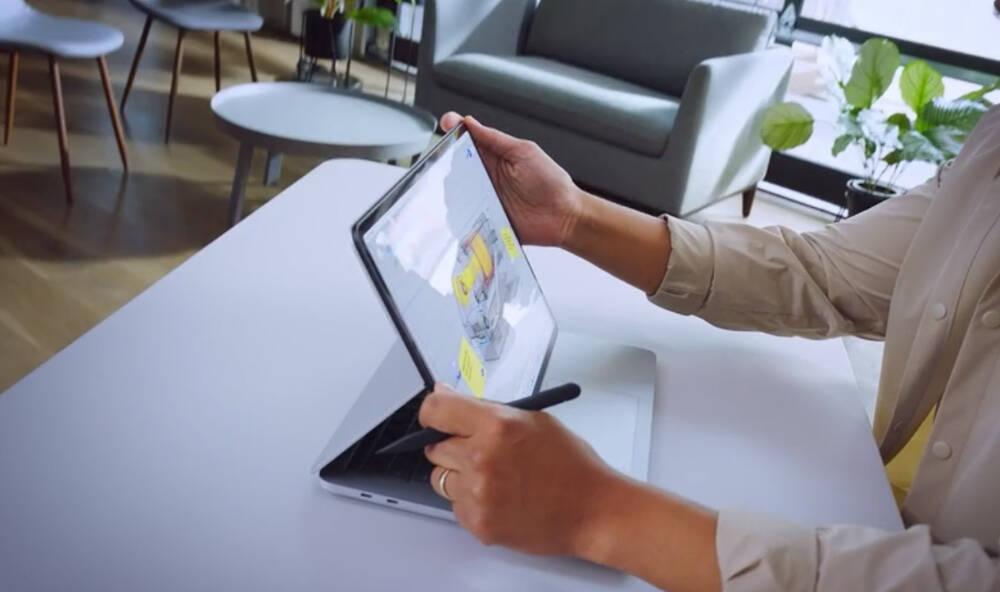 The Laptop Studio has a 14.4-inch screen with a resolution of 2400 x 1600 pixels and a refresh rate of 120Hz. It also has wireless connectivity, Thunderbolt 4 (USB 4.0) and Surface Connect ports, a headphone jack, 16 or 32GB of RAM, and a removable SSD that ranges from 256GB to 2TB. The Windows goliath said the hardware can run up to 18 hours on battery, depending on the configuration and use. The full tech specs and fine-print are here.

Not content with its latest design "innovation," Microsoft also announced new and refreshed Surface machines plus a second attempt at trying to make dual-screen smartphones popular. CEO Satya Nadella reckoned the hardware enables a lot of the remote-work and security features in Windows 11.

The event opened with Panay introducing the 13-inch Surface Pro 8 laptop-tablet, which starts at $1,099 and comes with an 11th-generation Intel processor and two Thunderbolt 4 ports, as with the Surface Laptop Studio. Microsoft says this gear has a battery life of up to 16 hours of normal use; has an adaptive color screen; and can be specced up for more performance-hungry users.

An updated Surface Pro X uses pretty much the same form factor as the Pro 8, and packs Microsoft's Qualcomm-designed Arm-compatible silicon: its SQ1 and 2 chips. The price is lower than the Pro 8, at $900 for the cheapest device, though for twice the money you get the LTE-equipped (non-5G) version with 16GB of RAM, SQ2 system-on-chip, and 512GB of storage.

For those who want their Surface without the wallet-busting price, Panos showed off the new Go 3, a 10.5-inch version of the more powerful Pro 8 that sports Intel's Pentium and Core i3 processors. Prices for this slab-top start at $400 for the base spec unit with 4GB of RAM, a 64GB SSD, and LTE support.

Additionally, the Surface Pro 7+, a tablet-laptop that arrived in biz-only guise earlier this year, is now available to consumers.

If at first you don't succeed ... The Surface Duo 2. Click to enlarge.Source: Microsoft.

Finally Microsoft also introduced the folding Surface Duo 2 smartphone, which has Qualcomm's Snapdragon 888 system-on-chip and support for 5G as part of its latest attempt to make dual-screen phones work.

Redmond still isn't sold on folding touch-displays, so the Duo is sticking with twin 8.3-inch screens split with a hinge. It runs an Android said to be optimized for Microsoft apps and the outer hinge has a thin screen to show notifications and battery life. Prices start at $1,500. ®

Get our Tech Resources