When I showed it to people, everyone's first reaction to the Intuition was exactly the same: "What?!"

That's about right. The Intuition feels like someone measured a 7-inch tablet wrong, cut it a little small, and said to their boss, "let's just make it a phone." A 5-inch display is big, sure, but not overly so — the real culprit here is the 4:3 aspect ratio, which makes the Intuition so large you can hardly even hold it one-handed. The 3.56-inch-wide body is slightly wider than a credit card, so you can try this for yourself: grab a credit card from one side, and try to reach your thumb over and touch the other side. I certainly can't do it.

If the Galaxy Note is the middle ground between tablet and phone, the Intuition is six parts tablet for every part phone. You absolutely have to use this device in both hands, like a tablet; it really doesn't fit comfortably in a jeans pocket, also like a tablet. The only thing it does that resembles a phone is, well, make phone calls, and it's not really suited to that either. Galaxy Note-toting friends have told me they quickly acclimated to holding the big slab up to their face, but I doubt you'd ever get used to talking on LG's monstrous device. 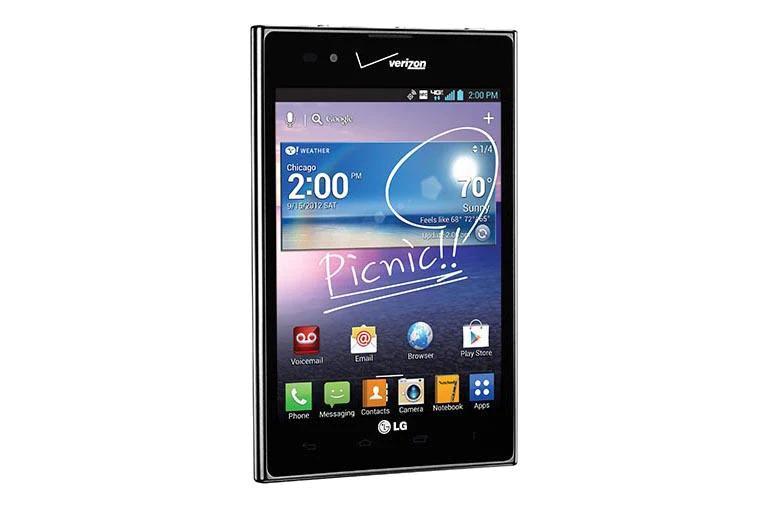 For what it is, though, the Intuition's not a bad-looking phone. It has curved sides, a flat top and bottom, and a roughly textured back. There are four capacitive Android buttons below the display, styled like the on-screen buttons would be — it's a slightly odd choice, but I like having the persistent buttons. The phone is well-built, and solid. If you sliced a third of the phone off you'd have a device similar to the Optimus 4X HD, and I wish Verizon were carrying that phone instead of this one — the 4X HD's 4.5-inch screen is plenty large, but I can actually use it.