Huawei’s FreeBuds Pro proved one of the surprise hits of 2020 and the Chinese manufacturer is back with a new pair of active noise-cancelling earbuds: the Huawei FreeBuds 4i.

Where the FreeBuds Pro sought to conquer the premium end of the true wireless earbuds market, the FreeBuds 4i, like the FreeBuds 3i before them, are designed to take on the huge range of earbuds available for under £100.

With ANC and awareness modes, in-ear battery life to match pretty much any of their rivals and decent sound quality, they’re certainly well placed to do so. But, unsurprisingly given their budget price tag, they’re no match for the leading ANC true wireless earbuds on the market.

Huawei FreeBuds 4i review: What do you get for the money?

The Huawei FreeBuds 4i are the most affordable active noise-cancelling earbuds I’ve tested. Available in three colourways – Ceramic White, Carbon Black and Honey Red – they’ll set you back a mere £80. That’s £10 cheaper than their predecessors the FreeBuds 3i were at launch and less than half the RRP of the FreeBuds Pro.

Just like the FreeBuds Pro, the 4i operate wirelessly over the latest version of Bluetooth – 5.2 – and support the AAC and SBC Bluetooth codecs. They come packaged with the same accessories, too: a USB-C cable for charging the case and three sets of different sized eartips to ensure you get a secure and stable fit.

In terms of design, however, the FreeBuds 4i more closely resemble the 3i than the Pro. Their stems are elongated with rounded edges, whereas the Pro favoured short and stubby rectangular stems. But they’re not carbon copies of the 3i. The stems are no longer cylindrical and have been flattened out, resulting in a more streamlined profile.

The main sections of the buds have also been tweaked to better match the shape of your ears and, regarding fit and comfort, I’ve not got a bad word to say about the FreeBuds 4i. I was able to achieve a secure fit using the largest of the three sets of silicone tips and they put no undue pressure on my ear canals, which is great for longer listening sessions.

When it comes to water resistance, the FreeBuds 4i are IPX4-rated. That rating is not mentioned in any of the marketing material – I had to reach out to Huawei for confirmation – but it means they’re capable of withstanding water splashed from any direction, making them a solid choice for trips to the gym and outdoor workouts.

Like the FreeBuds 3i and Pro before them, the 4i are compatible with Huawei’s AI Life app. At the time of writing, they’ll only work with the Android version of the app, although I’ve been told that compatibility with the recently released iOS app is in the pipeline.

READ NEXT: The best headphones for running

The app is pretty basic but well laid out and easy to navigate. There are no EQ presets or audio tweaking options, but it does display the remaining battery of each earbud and the case and lets you manually switch between the three noise control modes: noise cancelling, awareness and off. It also enables you to customise the 4i’s capacitive touch controls, which are limited but intuitive and easy to learn.

The total battery life of both the earbuds and the charging case is stated at 22 hours of audio playback at 50% with ANC turned off. That’s less than any of the options on our best wireless earbuds list but the buds themselves have a fair bit of stamina.

Huawei says they’ll last around 7hrs 30mins at 50% with ANC turned on and ten hours with it off, a figure few ANC earbuds can match. That figure proved accurate during testing. I was able to use them with ANC active for a significant proportion of the working day and they’d still have battery to spare come 5.30pm.

Your choice of play/pause, next song, previous song and wake voice assistant can be assigned to a double-tap on either bud, while touching and holding either bud cycles you through the three noise control options.

The controls work well on the whole and having to double-tap or long-press rather than just touch the earbuds once significantly reduces the likelihood of accidentally executing commands. Sadly, the excellent swipe to adjust volume feature present in the FreeBuds Pro hasn’t made its way into the 4i. 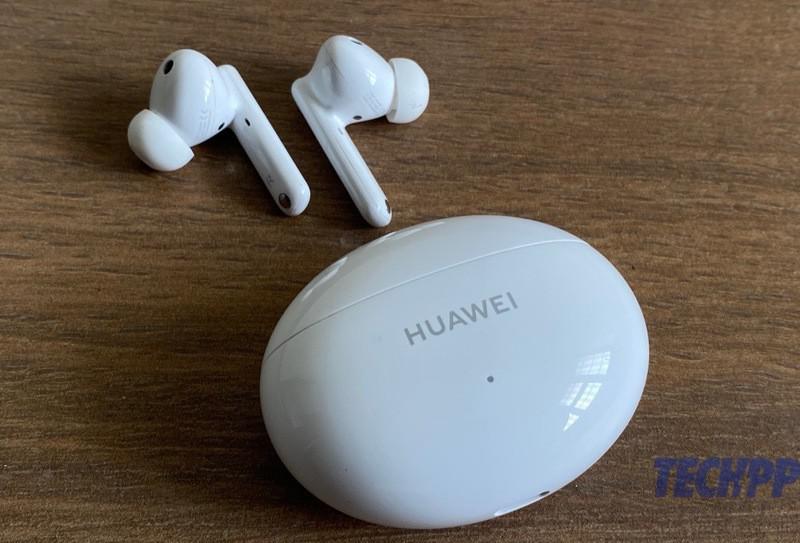 The pebble-shaped charging case, which Huawei says was inspired by Reynisfjara - a black sand beach in Iceland – is compact but its glossy finish means it picks up fingerprints quickly. The earbuds are equally glossy, which can make them a little tricky to get out of the case if you don’t grip them in a very specific manner.

While the FreeBuds 4i don’t have an auto-pause feature, when you take them out of your ears they will automatically disable ANC. This goes some way to eking out a bit of extra battery life but isn’t nearly as useful as full auto-pause/resume functionality.

Those that own Huawei or Honor smartphones or tablets running EMUI 11 can take advantage of the FreeBuds 4i’s low-latency mode. Unfortunately, this was something I was unable to test on the RealMe 6i and iPhone 8 I used during the testing process but I can’t say I had any issues with latency while watching video content.

Huawei FreeBuds 4i review: How do they sound?

Huawei makes it clear in the marketing materials that the FreeBuds 4i are specifically tuned for pop music and that’s immediately apparent once you’ve got them in your ears.

Vocals take centre stage in the audio mix and are delivered crisply, with zero distortion at high volumes. Pianos, electric guitars and percussion instruments are also cleanly reproduced and, despite the prominence of mid-range and treble frequencies, the FreeBuds 4i don’t sound tinny and aren’t overly fatiguing to listen to.

Although they aren’t the most detailed earbuds around, the FreeBuds 4i provided enough audio information to clearly make out the various voices comprising the backing choir in Madonna’s 1989 number one “Like a Prayer”. Madge’s voice is the star of the show, though, and the 4i managed to do it justice.

The Huawei FreeBuds 4i are less impressive when tasked with delivering tracks requiring a rich low-end response, however. Rihannna’s “Only Girl (In the World)” features a foot-tapping bassline through the verses that should transform into a full-on stomp once the chorus kicks in. But the FreeBuds 4i’s paucity of low-end weight left the chorus lacking the impact I’d hoped for. In contrast, the FreeBuds Pro delivered a meatier bass response that helped enhance my immersion in the song.

Avicii’s “Wake Me Up” further illustrated the point – the guitar and vocals sounded great but the bouncy bassline felt weedy. Although a pop hit, it’s a track that also falls under the dance/electronic banner so it's perhaps to be expected the pop-orientated Freebuds 4i fell a little short.

READ NEXT: The best cheap headphones

Huawei FreeBuds 4i review: How good is the noise cancellation?

The Freebuds 4i have only one ANC mode but the optimist in me thought Huawei might be able to match the Pro’s Ultra mode. Regrettably, that didn’t prove to be the case.

But it’s not all bad news. The FreeBuds 4i are reasonably effective at dampening low-end frequencies and exhibited ANC performance on par with two pricier alternatives I’ve tested over the past year – the JLab Epic Air and Urbanista London.

The only similarly priced earbuds I’ve tested to beat them in the ANC department are the Panasonic RZ-S500W, which launched at £170 but are currently available for just £100. So in that respect, they overperform and, as long as you’re not expecting class-leading noise cancellation, you won’t be disappointed.

An Awareness mode is also present, giving you the option to amplify external sound in situations where you need to hear what’s going on around you. This works well when you’ve got your music at low volumes but is less useful once you hit the 70% volume mark, at which point your music will drown out all-but the loudest ambient sounds.

The dual-microphone setup that enables the noise-cancelling and awareness mode also delivers solid voice clarity when on the phone. While speaking to my partner during a trip to the shops she reported that I sounded perfectly clear despite the windy conditions and she picked up very little background noise. During the Expert Reviews morning Zoom call, I received no complaints about how I sounded either.

Huawei FreeBuds 4i review: Should you buy them?

If pop music is your bread and butter, you’ll really enjoy the way the EQ of the FreeBuds 4i is tuned. I would have liked a bit more bass but, that sonic weakness aside, the 4i don’t do much wrong. They’re extremely comfortable, will last most of a day on a single charge, have IPX4 water resistance and their active noise cancellation is decent for the money.

All things considered, the FreeBuds 4i are an attractive pair of affordable ANC headphones. If you have a bit more to spend, you’re still far better off with a pair of noise-cancelling buds from Apple, Sony and Bose, but if money is tight they’re well worth a listen.