HTC has gone from being an unknown manufacturer for bigger brands to one spewing out leading Android smartphones. The Desire was a landmark phone in the fight against the iPhone, but now tech has moved up a level - can the HTC Sensation stay at the sharp end?

With the launch of the Samsung Galaxy S2, the Motorola Atrix and (to a degree) the LG Optimus 2X, dual-core phones have become the darling of the tech enthusiast.

And HTC has recognised that in bringing out a phone that ticks all the boxes for the most sought-after tech, bringing an 8MP camera, 1080p video recording, a dual-core 1.2GHz Qualcomm chipset and a qHD resolution 4.3-inch screen.

We've decided to test out the new HTC flagship in front of the camera, so if you want to see it with real life moving pictures, check it out:

Coming in at £35 a month on a two year deal, or £500 SIM free, it's matching the cost of other high end smartphones at the moment - but given it's HTC's flagship device, we'd expect it costing a little more than the masses. 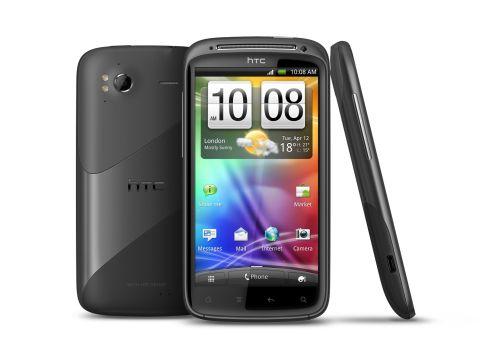 The design of the HTC Sensation is a little bit larger than its rivals, in that it comes in at 11.3mm thick - noticeably thicker than the likes of the Galaxy S2, but still feeling comfortable in the hand.

The screen is also a different animal to most of the 4.3-inch offerings out there - with the qHD (540x960) resolution display, the Sensation is a thinner offering while still allowing movies to be played in widescreen.

The phone itself is encased in toughened plastic and aluminium (which feels more like plastic) through the stripe in the centre - the whole back of the phones pulls away from the main device, with the antenna and suchlike pumped into the chassis rather than on the phone itself.

Getting the back of the phone off through the little catch at the bottom is much harder than it looks, with the fingers needed to prise it apart almost holding it in place at the same time - wiggling and shaking is needed to get to the battery and microSD card slot.

The power/lock button is placed on the top right hand side of the phone, and sits probably a little too close to the chassis to be easily pressed - although it's more of a minor annoyance than a deal breaker.

The headphone socket is at the top of the Sensation (rather than taking its design cues from the larger-screened phones like the Desire HD, which liked to plonk it at the bottom) but is probably a little close to the edge of the phone - getting a good grip when holding the phone to watch video can be a little hard.

HTC has long had a problem with screen visibility in direct sunlight, and it seems that issue has continued somewhat with the Sensation. It's definitely a step up, as at medium brightness you can make out what's on the screen, but compare it to the iPhone 4's Retina Display or the Super AMOLED Plus of the Galaxy S2 and it's miles behind. However, the resolution is definitely a step forward, and the sharpness of the text is impressive.

The HTC Sensation isn't in the same 'thin and super light' category of many of today's smartphones - it comes in at nearly 150g compared to the helium-esque devices on the market today - but it's a solid build quality and one you wouldn't panic about too much if you saw it plummeting towards a carpeted floor.

Gareth has been part of the consumer technology world in a career spanning three decades. He started life as a staff writer on the fledgling TechRadar, and has grown with the site (primarily as phones, tablets and wearables editor) until becoming Global Editor in Chief in 2018. Gareth has written over 4,000 articles for TechRadar, has contributed expert insight to a number of other publications, chaired panels on zeitgeist technologies, presented at the Gadget Show Live as well as representing the brand on TV and radio for multiple channels including Sky, BBC, ITV and Al-Jazeera. Passionate about fitness, he can bore anyone rigid about stress management, sleep tracking, heart rate variance as well as bemoaning something about the latest iPhone, Galaxy or OLED TV.