Editors' note: Thanks to the release of recent, high-quality tablets, the overall score of the Flyer has been adjusted down from 7.3 to 6.

While the rest of the industry is rushing to produce 10-inch tablets that compete directly against the Apple iPad 2, HTC is throwing out a curveball called the HTC Flyer. Using a 7-inch screen and running Android 2.3, the HTC Flyer feels like an echo of 2010's Samsung Galaxy Tab. Its pricing is also a little behind the times, with a 32GB model priced at $399 (two-year contract, 5GB monthly plan) or $599 (two-year contract, 200MB monthly plan) in a time when contract-free dual-core 10-inch tablets can be had for as little as $400.

What's more puzzling is that the Wi-Fi-only version of the HTC Flyer currently sells for $299, which is a dramatic savings over this 3G-equipped version when you factor in the cost of two years' worth of monthly data charges.

Does this Flyer have its head in the sand, or is this portable 7-inch tablet worth every penny? Let's take a look.

Hardware designThe Flyer looks and feels like a high-end take on the Samsung Galaxy Tab. The 7-inch screen size and surrounding bezel are identical, but HTC wraps its tablet in iPad-like aluminum with two strips of nonslip rubber padding on the back. With a little brute force, the topmost rubber fitting can be removed to reveal a microSD memory expansion slot, which is a convenient design trick adopted from the world of smartphones.

Across the bottom of the screen you'll find the typical trio of Android smartphone navigation buttons (Home, Menu, and Back) along with an illuminated button that responds only to HTC's optional Magic Pen accessory, which we'll explain in the next section. One impressive feature of the navigation controls is that they'll reorient to the bottom of the screen regardless of whether you're holding the tablet in portrait or landscape. It's a neat and practical trick, and one we haven't seen before. That said, it's a trick that today's Android 3.0 tablets don't need to employ, since all navigation is moved to the screen.On the top edge of the Flyer you'll find a headphone jack and a power button/screen lock. The right edge offers an ample-size volume rocker along with two pinhole microphones. The back holds a pair of small speaker grilles and a 5-megapixel camera lens capable of HD video recording (though lacking an integrated flash).

On the bottom edge of the Flyer is a unique 12-pin Micro-USB port, compatible with the included USB sync cable and charging adapter. At first blush, we found it annoying that HTC would use a specialized connector for syncing and charging, but it turns out that our old trusty five-pin Micro-USB (type B) cable works just fine. All those extra pins are just there for HTC's line of audio/video output accessories. In the end, it's a model example of how manufacturers can maintain basic connection standards while still incorporating specialized accessories. 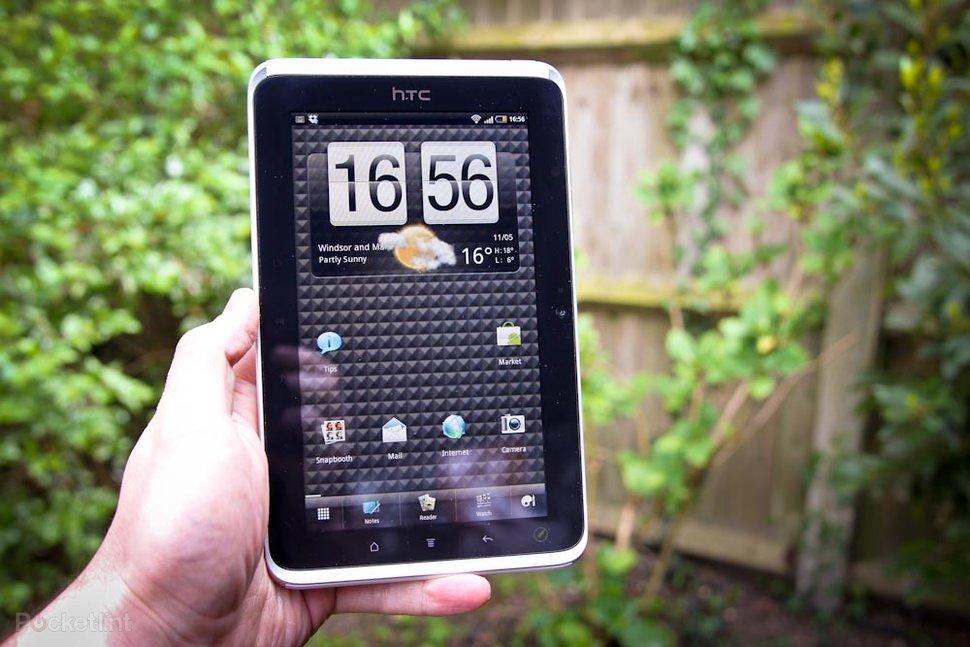 Overall, the HTC Flyer is a solidly built little tablet with a lot of attention paid to details. But in comparison with Apple's highly successful iPad 2, the HTC Flyer is relatively thick and its screen area is around half that of the iPad. There's an argument to be made for tablets with the Flyer's smaller, more portable screen size, but for us, the experience often overlaps too much with using a smartphone and still feels constricted for Web browsing.

The back of the HTC Flyer is a mixture of aluminum and white rubber, offering durability and an expensive feel.

FeaturesAs a 7-inch tablet running Android 2.3, the Flyer doesn't show us much we haven't seen on the Samsung Galaxy Tab running Android 2.2. We do appreciate HTC's Sense UI customizations for social network feeds and commonly used applications (Mail, Internet, Stocks, Weather, Reader), but that hardly makes up for the $150 premium over the Tab. There are a few little things that made us smile, such as Adobe Flash 10.1 being preinstalled, and the browser's default setting to load full sites instead of their mobile-optimized versions. Still, these are refinements of an OS designed for smartphones, at a time when Google is pushing a distinctly different OS (Honeycomb) for use on tablets. It's going too far to say that HTC is putting lipstick on a pig, but HTC is definitely putting considerable effort into dressing up Android 2.3 to make it tablet-worthy.

There are some good hardware features under the hood, but it's hard to say if you'll really notice them during everyday use. The Flyer runs on a 1.5GHz Qualcomm Snapdragon processor with 1GB of RAM, whereas the lower-priced Galaxy Tab uses a 1GHz Cortex A8 Hummingbird processor with 592GB of RAM. Both include Bluetooth 3.0 and 802.11n Wi-Fi. Both use brilliant 1,024x600-pixel-resolution screens covered in durable, scratch-resistant glass. The Flyer uses a 1.3-megapixel front camera (same as the Tab) and a 5-megapixel camera on the back. By comparison, the Tab's rear camera is limited by a 3-megapixel sensor, but has the advantage of an integrated flash. If you ask us, cameras on tablets always feel a bit awkward, and tend to only come in handy for video chat. Unfortunately, you'll have to find your own video chat software for the Flyer, since the included Google Talk app isn't the same video-enabled app found in Honeycomb.

Really, the Flyer's only significant differentiating feature is its Magic Pen or HTC Scribe technology (provided by N-trig). Using a combination of screen sensors and digital pen technology, the HTC Flyer can be used to scribble detailed notes, highlight text, make annotations, sign digital documents, and create intricate, multicolored drawings. Oddly, for this U.S. version, the pen itself does not necessarily come included with the tablet. Instead, you may be asked to pay up to $40 to purchase the pen as an optional accessory. It's a shame; without the Magic Pen, the tablet's dedicated button for launching pen utilities is just taunting you every time you pick it up.

On the other hand, the pen introduces an extra layer of complexity that not everyone will appreciate. For example, you can't actually operate the tablet with the pen. When you tap the pen on the screen, it inexplicably snaps a screenshot of whatever you're viewing and allows you to mark it up with virtual ink. Any navigation, page scrolling, or app launching still requires your fingers, which leads to a back-and-forth dance between fingers and pen. Put the pen down, and it rolls right off the table. Put the pen in your pocket, and its clipless design is likely to tumble to the floor if you reach down to pick something up. If this were a $2 pen, we wouldn't complain so much--but again, these pens are $40 each.

HTC's Magic Pen has the feel of a Sharpie marker, but not the price of one.

PerformanceThe HTC Flyer is undeniably fun to use. The interface is fast and responsive. The HTC Sense interface puts an emphasis on connecting with your friends and social networks. Google's excellent core apps are included, such as Gmail, Calendar, Gallery, Maps, Latitude, Navigation, Places, Talk, and, of course, Marketplace. The included multitouch keyboard is excellent and easy to type with using your thumbs in both landscape and portrait orientation. Apps (including the camera) launch within seconds. The Web browser is lean and powerful, with an impressive selection of advanced settings that can be adjusted. All in all, it's everything you'd hope for from a first-class HTC smartphone.

Unfortunately, we can't help but feel that the tablet-as-giant-smartphone concept already wore out its welcome in 2010, with the launch of products like the Dell Streak and Samsung Galaxy Tab. We'd also like to see the shenanigans of two-year contracts thrown out the window, considering that the iPad 2 offers customers inexpensive pay-as-go service.

It's a given now that consumers already own a smartphone and expect a tablet to offer something different beyond a bigger screen. The closest the HTC Flyer comes to achieving this is the tie-in with the Scribe technology, but we're not convinced that's a feature most people are looking for, and as a selling point it's hampered by the fact that the pen is sold separately as an accessory.

That said, as the rich man's Galaxy Tab, the HTC Flyer has plenty to brag about. The LCD panel quality is beautiful and offers excellent viewing angles and brightness. Image and video capture quality are adequate, though not exceptional. And if you've been looking for a tablet with sophisticated tools for note taking and document annotation, the Flyer's Scribe technology is the best game in town.

Final thoughtsThe HTC Flyer is a beautiful little tablet that resembles HTC's celebrated line of Android smartphones. Unfortunately, the Flyer is still a 7-inch Gingerbread tablet living in an increasingly 10-inch, Honeycomb world. HTC may eventually be able to carve out a niche for the 7-inch pen-enabled tablet, but not at this price.