The Xperia 1 series has been Sony’s flagship for some time now. We are reviewing its third variant today, updated and released for the Fall 2021 device release season.

Sony is bringing the variant of Xperia 1 III with 12GB of RAM and 256GB of storage to the Singapore market. While the recommended retail price is a cool S$1,899, your purchase gets you a pair of Sony WF-1000XM3 Bluetooth earbuds, if the device is purchased from Sony’s own online store.

The Xperia 1 III comes in the same familiar, understated angular frame that has come to define the Xperia line. Weight distribution of the device is very balanced, and the matte, dark purple body of our review unit looks and feels suitably premium in my hand.

Sony has tried its best to minimise bezels on the front, but the design decision to avoid a front camera cut-out and maintain a balanced outlook means small bezels along the top and bottom lengths of the device, giving us an 84.2 per cent screen-to-body ratio.

The rear is made of Gorilla Glass 6, but you may not realise it as the “smooth matte” treatment makes it not feel the part. The Sony logo is silkscreen-printed on the middle of the rear in transparent gloss, while regulatory details and the Xperia brand are in a faint white print.

Like the Xperia 10 III, the balanced, rectangular construction of the device is amazing to hold. With the Xperia 1 III, the sharp edges of the device have a pronounced 45-degree tilt so they do not bite into the flesh of your palms.

The fingerprint resistant coating and comfort of the Xperia 1 III’s build makes this one of the very few devices that I would love to use without a case.

The matte aluminum frame surrounding the Xperia 1 III has the same colour as the rest of the device, and is decent at repelling fingerprints (unlike the iPhone 12).

I can understand why Sony chose to carve a depression on the sides of the device for the power button due to the fingerprint sensor, but I probably would not have done the same for the dedicated Google Assistant key. Flushing the button should make the device even more comfortable to hold.

The shutter button adorning the bottom right frame of the Xperia 1 III has a two-stage click for focusing and capturing, as is familiar to the series.

Measuring 165 x 71 x 8.2 mm and weighing 182g, the Xperia 1 III packs a 6.5-inch OLED screen. This comes with a 21:9 aspect ratio and 120Hz refresh rate, plus it runs at a bleeding 4K resolution. Gorilla Glass Victus protects the screen from shatter.

Sony has been using OLED screens for a while, and the deep blacks and vibrant colours are always welcome. The 120Hz display is a new addition that makes reading and navigating on the device a buttery smooth experience.

To be honest, I do not see the need for a 4K resolution on a screen smaller than a tablet. Still, the Sony phone automatically triggers the higher resolution when playing videos and running compatible applications and games.

I “forced” a lower resolution by changing the Display Size within the Settings menu to Large. It made things a lot easier to view on the narrow display, and probably did good things for battery life at the same time.

I am still no fan of the 21:9 display aspect ratio. It is meant for media consumption, but I probably speak for most when I say smartphones are used just as heavily for text content like social media and messaging.

Viewing angles are good on our review unit, and the display on the Xperia 1 III is bright and not too reflective, which are good for legibility under the sun.

I noticed whites turning into blue more quickly when looking at the screen in portrait orientation from the bottom to top, as compared to other angles. A pity, since that is bound to be the most common way to hold the device. This is merely an observation – viewing angle performance is above average here.

The Xperia 1 III’s smooth performance is probably aided by the flagship Qualcomm Snapdragon 888 processor under the hood, complemented by 12GB of RAM, which is frankly a little excessive.

There is barely any lag when opening applications and moving across menus. Websites scrolled smoothly, especially when the screen is running at 120Hz.

A top-of-line Adreno 660 graphics core provides the raw muscle to keep your games running. I am happy to report a smooth experience on Asphalt 9: Legends, though I wished anti-aliasing can be a little stronger.

I must highlight a meaningful plus, and that is the Xperia 1 III comes with a headphone jack on the top left of the device. Yes, this is an “endangered” feature on premium devices. 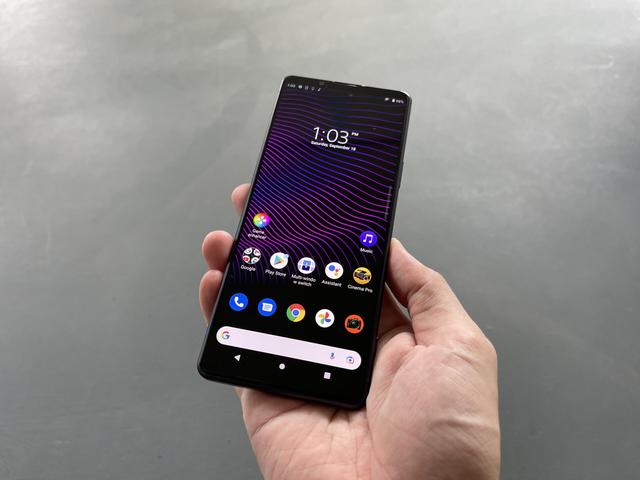 The phone also allows for storage expansion with its microSD slot. This Xperia should be your handset of choice if you are on the lookout for a flagship with these features.

The Xperia 1 III has dual front-firing stereo speakers, something that is expected on flagships. They do not distort even at loud volumes, but are not the most well-rounded by built-in speakerphone standards. I find myself craving more timbre, as the output can sound a little hollow.

The built-in speakers are not about to pump out substantial bass, but the Xperia 1 III makes up for what it lacks aurally through the kinesthetics.

There is a fancy “dynamic vibration” function that grooves along to the beat of whatever you are watching or playing. Adjust its intensity through the same volume control menu that can be triggered with the volume up and down buttons.

It is pretty fun, and a different way to experience the bass since videos on smartphones are mostly watched with the device held in hand.

Battery life plunged while I was gaming on 4K. I lost at least 5 per cent battery over a game session that did not last longer than 20 minutes.

In general use (messaging, social media, reading news and articles, some photography), the battery life is unremarkable. I needed to reach for a charger before the night ended, if I kept the high refresh rate display on. I will think the device can get through the day with the refresh rate set to 60Hz.

The Xperia 1 III packs a 4,500mAH lithium polymer battery pack. The device gets quite a few things right, but it could have done with a larger battery to power all that it carries. A 4K resolution, 120Hz screen running on the latest silicon has substantial power demands to meet.

To be sure, the Xperia 1 III has already gained a rough millimetre in width to fit a larger battery than its predecessor. Still, if Sony has opted for a 20:9, or even 19:9 display, it would have had more internal space to fit a larger cell.

The Xperia 1 III comes with a 30W Power Delivery-compatible USB-C charger in the box. It is able to get the device more than 80 per cent charged from a flat battery within an hour, going some way to manage the range anxiety from the average battery life.

The Xperia 1 III features a triple-camera array with the wide-telephoto-ultrawide combo. The party trick here is that the periscope-based telephoto camera supports 70mm and 105mm focal lengths, giving the equivalent of a 2.9x and 4.4x zoom.

This offers some interesting flexibility in photo-taking. Most periscope telephotos offer either of two zooms, and the wide lens will have to pull double duty to digitally zoom up to the telephoto’s minimum focal length. Sony’s design is a reasonable alternative.

Picture quality is very good overall, with both the wide, and telephoto camera at 70mm focal length producing good results due to the optical image stabilisation and phase-detect autofocus. The ultrawide is decent, but tends to be grainier and blurrier without stabilisation assistance.

The 105mm, while decent, produces shots that appear more grainy and washed out due to the small aperture limiting the amount of light reaching the sensor. To be sure, the telephoto lens uses a smaller sensor than the ultrawide. It is just the former’s weakness is less obvious as one is typically zooming in on a particular subject.

The Sony Xperia 1 III is what you would expect of a flagship today. The construction is premium, and I love its understated, fingerprint-resistant looks. The screen is of a high quality, but I continue to wish Sony would go back to wider instead of taller screens.

The imaging system is a high quality one as well. Sony has chosen to extract maximum raw power out of the hardware which they built themselves, rather than lean on software to soup things up.

There is nothing wrong with that, except that machine learning and AI has come so far that raw hardware chops may not be enough for Sony to out-compete Google and Apple.

Responsiveness is very much above average, and you can increase the Xperia 1 III’s storage capacity through its microSD expansion slot, while plugging in a good pair of wired headphones when you cannot get past the hollow audio from the built-in speakers.

There is nothing seriously wrong with the device, but at a near-S$2,000 price tag, it cannot make any mistakes at all. Unfortunately, while battery longevity is no longer an issue on most flagships, it can be a concern on the Xperia 1 III.

I am glad Sony has upsized its batteries, but it can frankly go further, given how much of a powerhouse (and power hog) the Xperia 1 III can be with its top-tier hardware.

Combined with the excellent-but-not-the-best imaging, the Sony Xperia 1 III is a device I would recommend to those who want good performance and are particular about build quality.

Plus, if you’re on the lookout for something not from the usual phone makers and want a 21:9 display, then the Xperia 1 III may be worth a look. Just mind its premium price tag.