For $449 you get 32GB of storage with a microSD card storage expansion option included as well as plenty of useful software extras. It's one of the best deals you'll find for a tablet, but I can't fully recommend it without a few qualifiers, which I'll detail below.

Design The Asus Transformer Pad TF701T is essentially the same tablet Asus released in 2012 and 2011. Its received a few nips and tucks here and there, but if you've ever used either the Transformer Prime or Infinity, you'll immediately find the TF701T familiar.

Now, the Transformer line has always had sound design, but in a year when large tablets like the Apple iPad Air, the Sony Xperia Tablet Z, and the Kindle Fire HDX 8.9 are setting weight-loss records, I must admit to being a bit disappointed that Asus didn't push this design forward in any real way.

It's noticeably heavier than the aforementioned rival tablets. Not to the point of being a struggle to hold, but the difference is there and noticeable. As a person with large hands I can somewhat appreciate its extra-wide bezel, but when it's sitting next to the iPad Air or Fire HDX 8.9, it exudes an undeniable antiquated aesthetic.

By placing the volume and power buttons on the tablet's back instead of the top or side edge as is the case on most tablets, Asus makes it a bit more difficult to access these buttons while the tablet's lying on its back. Still, they're easy to find when in your hands.

There's a microSD card slot and a Micro-HDMI port on the left edge. A 1.2-megapixel front camera sits on the top bezel, with a 5-megapixel rear shooter directly behind it on the back. The lone speaker grille can be found on the back.

The keyboard dock will cost you an extra $150 and includes a USB 3.0 port, full size SD card slot, and an extra battery. However, it feels cramped to type on compared with the Microsoft Surface 2's Type Cover accessory. If my goal was to get actual work done, I'd choose the Surface 2 over the TF701T in a heartbeat, thanks to its more comfortable keyboard and the inclusion of Microsoft Office.

There's nothing inherently bad about the TF701T's design, it's simply a solidly designed tablet lacking any innovative traits. 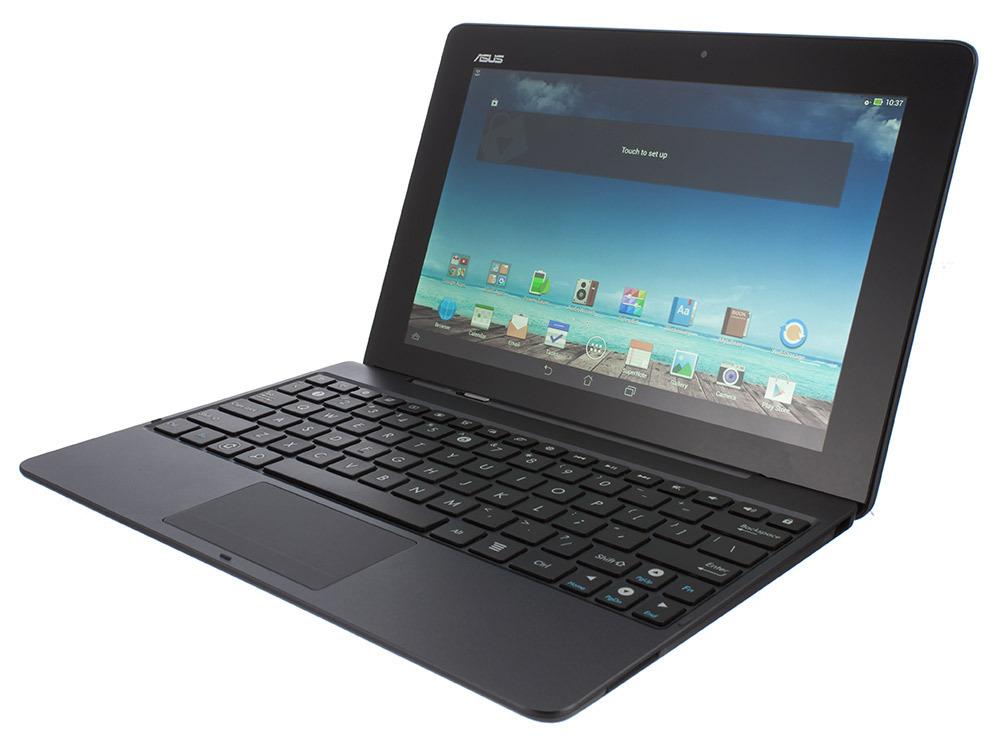 Software features As Android tablet manufacturers go, Asus is probably second only to Samsung when it comes to including useful custom software features and apps. The always useful File Manager lets you easily access files and apps, and with App Backup you can (as you might have guessed) back up your apps and settings to an external device. App Locker lets you set up passwords to keep others from accessing apps of your choosing on the tablet.

There's also Splendid, where you can adjust the color temperature, saturation, and hue of the screen. An array of utilitarian widgets are also included, such as a calculator, a video player, and a compass. All can run concurrently with other apps.

The Power Savings app lets you set the screen brightness for a number of different tasks like reading e-mails, books, etcetera. Which simply means that when using certain apps to perform these tasks, the screen will adjust its brightness accordingly. The pull-down shortcut options of "Maximum Performance," "Balanced," and "Power Savings" that appeared in previous versions of the Transformer tablets has been replaced with similar options within the Power Savings app.

Also of note are the Samsung-inspired camera features that includes options for taking night pics, panoramas, or creating GIFs. There's also a mode that will remove moving objects and one that takes five burst shots and lets you choose the best one. These features aren't as sophisticated or as useful as similar options on the Samsung Galaxy Note 10.1 2014 Edition, though.

Performance The TF701T features a 10.1-inch display with a sharp 2,560x1,600-pixel resolution. However, resolution alone doesn't solely determine a screen's quality. And while the screen is as sharp as they come, it doesn't seem to support as many colors as the iPad Air's or Fire HDX 8.9's screens -- even after spending ample time adjusting colors in the Splendid app.

As with previous tablets in this series, Asus outfits the TF701T with an outdoor mode, which boosts screen brightness beyond normal. However, even with this feature turned on, the screen disappointingly doesn't get as bright as previous Transformer tablets did, although it's definitely not dim.

With a 1.9GHz Tegra 4 inside, gaming performance is up there with the best in the tablet space; however, like other Android tablets with screen resolutions this high, frame rates are stymied. This is due to the fact that the GPU has to render more pixels than tablets with lower resolutions.

It's still good performance, but I just wanted to make it clear that the higher the resolution, the more horsepower is needed to render those pixels and this is as high as tablet resolutions go these days. It should be noted that I saw the same issue on the Kindle Fire HDX 8.9 with its Snapdragon 800 processor.

I also didn't notice any hitches or stutters when navigating the interface and apps loaded pretty quickly.

The 1.2-megapixel front camera is incredibly grainy and doesn't deal well at all with environments with an abundance of light or a lack of light. Pics are either washed out with too much light or too grainy, thanks to the lack of luminance.

The back camera is a bit better, but it's still noticeably grainier than either the iPad Air's or HDX 8.9's and has some of the same ambient light problems. It paints pictures in a yellow hue and is generally grainy and rough.

Using the tablet over a couple of days, running tests, playing games, changing the brightness settings, the battery meter never got to any alarmingly low levels. However, check back soon for our official battery test results, both with and with the keyboard dock included.

Conclusion If you're simply looking for a large Android tablet with a fast processor at a reasonable price you can't go wrong with the TF701T as that's exactly what it is. Also, the myriad Asus-branded software extras are a nice bonus as is the microSD card slot.

However, if you're thinking of using the tablet for productivity, I'd instead recommend the Microsoft Surface 2 thanks to its more comfortable keyboard and inclusion of Microsoft Office. Also, the Kindle Fire HDX 8.9 has a better screen, better cameras, and an incredibly vast media ecosystem for about the same price -- for the 32GB version. The HDX 8.9 is also a lot thinner and lighter.

If you can spend the extra money, the Samsung Galaxy Note 10.1 2014 Edition has a brighter, more colorful screen, more OS customization options, a built-in IR blaster, better cameras, and of course an included stylus. Finally, the iPad Air's thin design and awesome app collection will cost you, but is well-worth the money.

The TF701T is a good tablet for the money, but be sure to look at other tablets out there before you take the plunge. Spending a bit more time researching may get you closer to choosing a tablet that more aligns with your needs.