Amazon’s former CEO might be preoccupied with meeting the demands of his budding billionaire space club but, thankfully, the company itself is still thinking about the needs of the consumer on a budget.

Year after year, the all-conquering e-commerce giant cranks out shiny new upgrades to its affordable lineup of own-brand tech products, be they e-readers, smart speakers or tablets for kids. This time around we’re looking at the Fire TV Stick Lite, the cheapest streaming stick in Amazon’s range of streaming products.

The Fire TV Stick is Amazon’s starter model streaming stick and it competes with popular budget streamers from the likes of Roku and Google.

As with the regular Fire TV Stick, the Fire TV Stick Lite runs Fire OS, a UI that offers viewers access to a smorgasbord of streaming platforms including Disney Plus, Now, Netflix and (obviously) Amazon Prime Video.

It supports resolutions of up to 1080p (FHD) at 60fps and even packs in three HDR formats, HDR10, HDR10+ and HLG – pretty advanced stuff for such an affordable device. As well as the streaming stick and mains adapter, the box includes a basic remote control with a voice search button that wields Amazon’s Alexa smart assistant to help you find content and execute commands as quickly as possible.

The Fire TV Stick Lite also has Dolby Atmos support, but it’s not quite the same as on other Amazon streamers and only offers passthrough over HDMI. In layman’s terms this means it cannot transcode multichannel audio; if your TV or your receiver cannot decode the audio stream from your chosen streaming service, you may end up only hearing stereo rather than Atmos or, for that matter, any other multichannel audio stream.

Fork out an additional £20 and you could get your hands on the £50 Amazon Fire TV Stick 4K. In addition to the TV controls, Dolby Atmos audio and HDR formats offered by the standard Fire TV Stick, it adds 4K/UHD playback and Dolby Vision support to the mix. Needless to say, there’s not much point buying it if you don’t have a 4K TV.

As far as non-Amazon products go, consumers are spoiled for choice. US streaming giant Roku has the best selection: its £25 Full HD model, the Roku Express, undercuts the Fire TV Stick Lite by £5, and its £40 Roku Express 4K is currently the best-value 4K streaming stick on the market. Unfortunately, neither of those models has a voice-control remote, but the devices do work with a free Roku app that lets you control the Roku OS and execute voice commands from your smartphone. 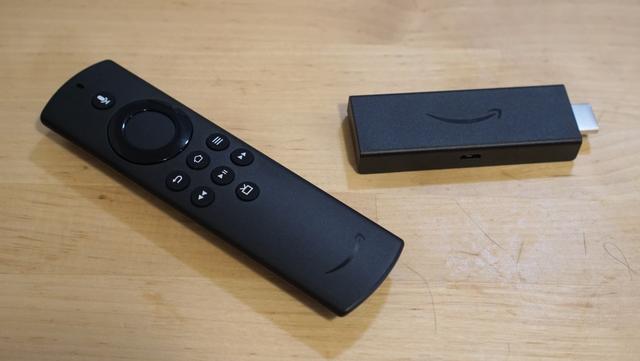 Alternatively, you could pick up a Google Chromecast for £30. It’s not your typical streamer, as it has no physical remote or UI of its own, but it’s compatible with many apps and it integrates well with other Google Home products.

The Fire TV Stick Lite looks identical to Amazon’s other streaming sticks: it’s small, black, rectangular and made of plastic. The dongle, which measures 3cm wide and 8cm long, slots directly into one of your TV’s HDMI ports and is powered with a mains charger that connects to the Fire TV Stick Lite via a micro-USB cable.

On my test TV, the three HDMI ports are all fairly close to one another and I was unable to connect my soundbar, Fire TV Stick Lite and Xbox cables at the same time due to the width of the Amazon dongle. Luckily, Amazon also throws in an HDMI extender that solves this problem.

The downside of using the extender is that the dongle then pokes out from the side of the TV in an unsightly fashion, although you could stick it in place with tape or Blu Tack to keep things looking tidy.

Setup is about as easy as it gets if you already have an Amazon account. Once you’ve plugged everything in, select the correct HDMI source on your TV, then follow the onscreen guidance.

In no time at all you’ll have the device synced with the remote control, connected to your Wi-Fi network (it supports dual-band, dual-antenna 802.11 a/b/g/n/ac Wi-Fi) and registered to your Amazon account. From there you can get right into choosing your apps and streaming content on all the platforms for which you have subscriptions.

Running the latest version of Fire OS (version 7.2.4.9 at the time of writing), the Fire TV Stick Lite’s interface is fairly slick and user-friendly, if a little heavy on the Amazon-produced content promotion.

The Home section offers up a platter of recommended apps and content, divided up into rows of tiles. You’re only ever about three clicks away from launching into your most recently used app, although it can be easy to get distracted along the way by the glut of promoted content Amazon throws in your face.

To the right of the Home panel is the Find section, where you can drill down more specifically, filtering by genre, browsing your watchlist or opening your library of rentals and purchases.

After this, there’s a Live section highlighting all the apps that let you watch live TV, plus whatever sporting events are coming up in the next 24 hours. To the right of the Live page, there’s a row of your most favoured apps, a list you can customise to your liking. Finally, the complete apps library and settings menu sit at the far right of the interface.

At any point, you can hit the mic button at the top of your Fire TV remote to call up Alexa and search for whatever you’re looking for by voice. This saves scrolling and it’s usually pretty reliable at following orders. It’s a tad laborious to find the app store section within Fire OS – it’s buried about three menus deep – so I’d recommend asking Alexa for that, too, and cut right to the chase.

Amazon’s Fire OS is compatible with almost every platform you could possibly want. There’s obviously a heavy emphasis on Amazon Prime Video content, but all the other mainstream contenders are on board, too.

Between Netflix, Disney Plus, Now and Apple TV Plus, you’re well covered for paid entertainment services. All the free UK catch-up services are included too, from BBC iPlayer through to My5, and sporting fanatics are covered by BT Sport and Eurosport. Needless to say, you’ll have to pay if you want content from any of the premium platforms.

When it comes to playback, your TV is going to play the biggest factor in determining picture quality. For a start, if you’re watching Full HD content through the Fire TV Stick on a 4K TV, then the clarity of the image comes down to the upscaling capabilities of your television. And if your TV doesn’t support the HDR10, HDR10+ or HLG formats? You can forget about that High Dynamic Range content. While it is possible to stream HDR content in Full HD, there are only a select few Full HD televisions on the market that actually offer HDR support.

On the TV I’m using, the LG CX, Full HD Netflix and Amazon content looks pretty great. Not as crisp or detailed as 4K video, but still very good. Even if your TV’s upscaling abilities aren’t all that, it doesn’t matter as much as HDR support.

To see the sheer impact HDR has on the brightness and vividness of the Fire TV Stick Lite’s picture, all I had to do was temporarily disable HDR in the Stick Lite’s settings and then return to the formerly HDR content I had been watching. The difference was night and day, the colour seemingly drained from the screen and the details in the background lost to shadow. I turned HDR back on and the show suddenly looked great again. With this HDR support on board, the Fire TV Stick tops the Roku Express and Google Chromecast as the better of the budget streamers.

It’s worth noting again that the impact of HDR is dependent on your display’s capabilities. If the TV has low brightness and contrast levels, the resulting HDR playback won’t be much more impressive than regular SDR (standard dynamic range) content.

For £30 or less, the Amazon Fire TV Stick is the most complete streamer package you can get. Granted, it only supports a maximum resolution of 1080p, but the same is true of any other streaming stick at this price.

Where it stands out from the budget streamer pack is with its High Dynamic Range support, which can make the world of difference when watching the latest HDR shows and movies. If you have a Full HD TV that’s HDR-savvy, then the Fire TV Stick Lite would be the perfect streaming stick for you.

The thing is, there aren’t too many Full HD TVs that fit that description, and with so many affordable 4K HDR TVs on the market, many people have already made the upgrade. And for 4K TV owners, the Roku Express 4K and the Amazon Fire TV Stick 4K are both better choices, if a little more expensive, not to mention that most 4K TVs already have a good selection of their own 4K-capable apps anyway.

It’s also easy to make the case for buying the latest standard Fire TV Stick instead since it only costs £10 more than the Stick Lite and brings TV controls and fully fledged Dolby Atmos support. Yet there’s nothing really wrong with the Fire TV Stick Lite, so if Full HD HDR playback is good enough for you and you’re desperate to add Alexa voice control to your TV, then look no further.