Nokia's Lumia 820 is a very unassuming slab. At first glance it's easy to call this a boring handset, but a closer inspection made me respect Nokia's design choices here. A removable polycarboate shell houses the phone's innards, and it's sturdy as well as colorful. The 820 also has comfortable, rounded corners that don't dig into your hands like the company's Lumia 800 did.

After using the HTC Windows Phone 8X recently, I was surprised at the weight of the 820. Although it's no Lumia 920, this small package feels weighty initially. At 5.64 ounces it's shy of the Lumia 920's 6.52-ounce heft, but it's heavier than the Lumia 800 or iPhone 5. After a few days of use I got used to the size and feel of the 820 — in fact I found it extremely easy to use in one hand thanks to the thickness and display size. A 4.3-inch screen is the perfect size for smartphones in my opinion, providing the phone remains relatively thin. 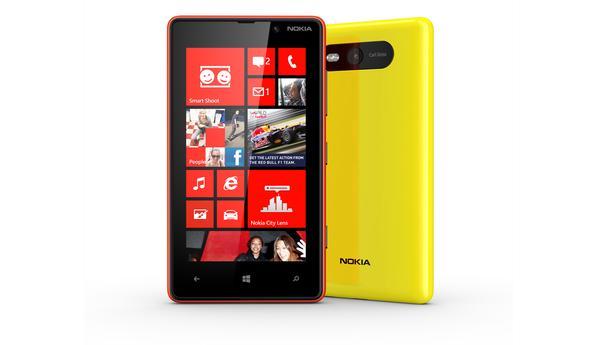 While Nokia's Lumia 800 and Lumia 920 include a curved display, the Lumia 820 features a flat AMOLED panel identical to the Lumia 900's. However, the glass is flush to the sides of the device so there’s not a big ridge like the Lumia 900, and it’s comfortable to swipe in from the edges. The flat display takes away from the aesthetics of the device, but it doesn't appear to collect dirt and dust easily. The front of the device includes a forwarding-facing camera and the usual array of Windows Phone capacitive hardware buttons. Nokia has opted for its usual buttonless left-hand side, with the power, volume, and camera buttons all on the right-hand side. These buttons feel solid and there's no wiggle at all. At the top there's a 3.5mm headphone jack and down bottom Nokia has centered its Micro USB port alongside a speaker.