The Galaxy Z Fold 3 is here, the newest premium foldable from Samsung. Perhaps you’ve even just received your shiny preorder device in the mail. The phone itself is great, definitely the best foldable yet. Samsung is also known for putting out a bevy of accessories with each flagship launch. In general, Samsung accessories tend to be well built with a number of useful features. At Samsung Unpacked, Samsung did unveil the S Pen Case for the Galaxy Z Fold 3, a flip case that not only protected the new foldable but also had a storage area for the S Pen Fold Edition. Unfortunately, this new Galaxy Z Fold 3 Flip Cover with S Pen is neither well-built nor useful.

The case itself looks decent enough out of the box. In fact, snapping the case on is fairly intuitive as well. If you view the case only from the back, it’s actually not that bad, albeit a little bulky for sure.

The textured material adds some grip to the Z Fold 3, which is nice for such an expensive device. You also get a sleeve for storing the S Pen, which is detachable should you want to use the S Pen without the case. All of these things sound great, so what’s the problem?

The issue lies with the front cover and the extra width needed for the S pen slot. 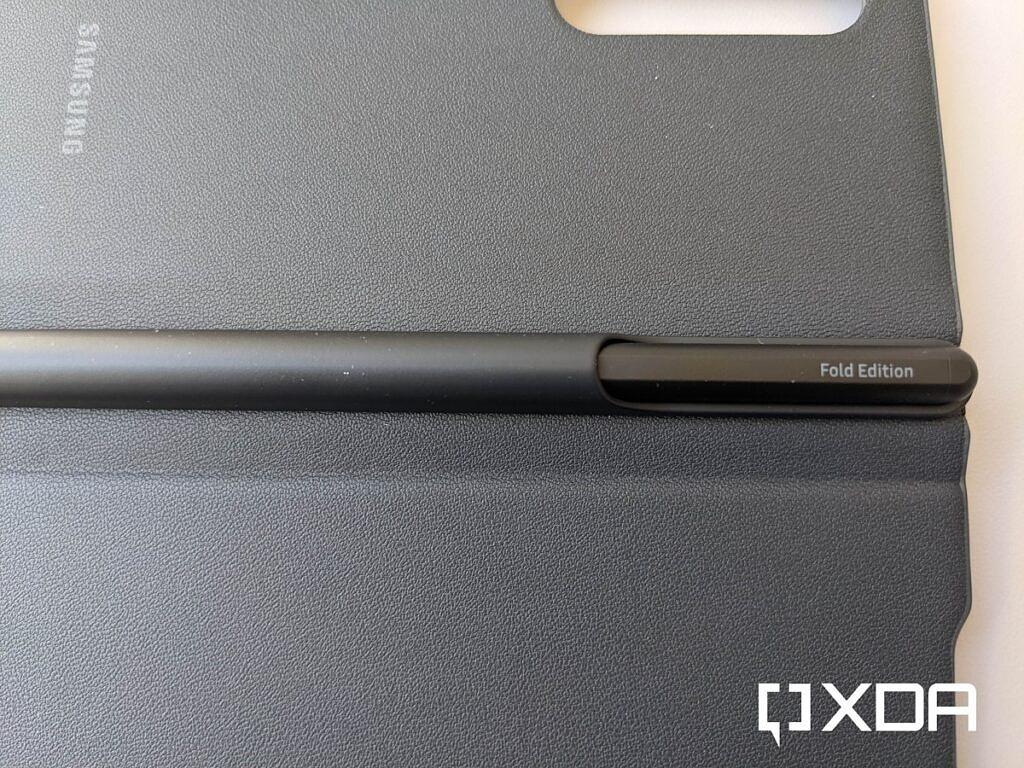 My biggest concern is that the front of the flip cover will not close properly to fully protect the cover display on the Galaxy Z Fold 3. You can try to carefully slide the case over the edge of the phone’s cover screen, but it snaps back to a position where a small sliver of the screen remains exposed. The only way to keep the flip cover properly in place is to hold it there with your hand, obviously not practical or ideal on a daily basis. Some Reddit users mockingly suggested using a rubber band to hold the flip cover in place, which is an indication of the shortcoming of this $80 case. Surely Samsung could have engineered a better solution here? They made a really good pair of foldables after all, so this case is perplexing.

If you decide to unfold your Galaxy Z Fold 3, the Flip Cover with S Pen continues to make using the phone more difficult. The left edge of this case now sticks out from the left side of the Z Fold 3, making it incredibly difficult to use the phone, even with two hands! If you have a dominant left hand, single-hand use is practically impossible.

I would contend that this inconvenience takes away the appeal of having the S Pen stowed in the case. It’s awfully difficult to write with the S Pen in the unfolded orientation because you need to balance the case awkwardly in your other hand. The Flip Cover with S Pen also does not lay flat on a desk or table, so you can’t put it down to use the S Pen more reliably.

I’ve used a lot of Samsung cases over the years, for almost every flagship they’ve released. The Galaxy Z Fold 3 Flip Cover with S Pen is one of the worst designs I’ve ever seen. After using this case for a few days, my best advice is to remove the detachable S Pen silo and throw the case in the trash. You can find other better uses for your $80.

If you do need a case, these are some of the Best Galaxy Z Fold 3 cases, and we’ll be adding some S Pen storage cases as soon as we spot some good ones.