BARCELONA — Before the iPhone was even a twinkle in Steve Jobs’s eye, the T-Mobile Sidekick was the status symbol every teen in America had to have. With its slide-out QWERTY keyboard, the Sidekick was the perfect texting machine. But that was before touchscreens changed the game — there are now kids who don’t know that most phones had physical keyboards. British startup F(x)tec wants to bring the QWERTY keyboard back to smartphones, with a thoroughly modern twist.

"An ideal phone is a modern handset with features we used to like," F(x)tec founder Adrian Li Mow Ching said during a demo of the startup’s $649 unlocked flagship Pro 1 at Mobile World Congress.

The Pro 1, which is available to preorder now and ships in July, looks like a slightly older Android device on first glance, with relatively thick black bezels (compared to this year’s phones) surrounding a 5.9-inch AMOLED display. But then it becomes clear that, at more than a half an inch thick, the Pro 1 is a little heftier than other phones on the market (except the foldable flagships that aren’t available to buy yet). There’s something different about this phone.

The Pro 1’s bulk is due to the keyboard stacked beneath the screen, which slides up at a 155-degree angle so you can type on a flat surface and and still see the display. F(x)tec’s execs say the company tested the Pro 1’s durability by sliding the screen up and down 100,000 times without breaking. In my hands-on time, I found the screen actually needed some force to slide upward when holding the device in landscape mode, with both thumbs pressing upward on the screen to move it. 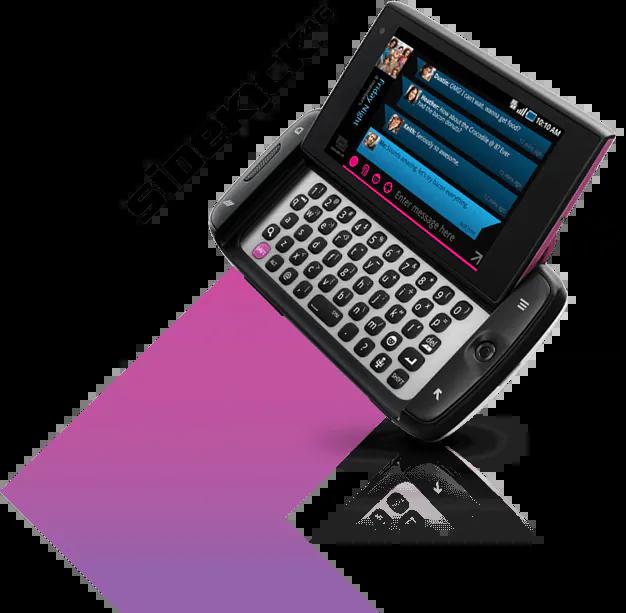 The keyboard’s design will look familiar to anyone who has ever used a physical keyboard on a phone. Five staggered rows of slightly rounded keys make it easier to press one letter without accidentally smashing another one. The sensation of actually pressing a key to peck out a text message is a soothing one, though I’m not as adept at typing on tiny keys as I used to be and kept making mistakes as I attempted to compose an email.

The Pro 1 has a full-touchscreen display, so you don’t have to actually use the keyboard at all. But if you need to send a lengthy email without a laptop nearby, the Pro 1 can be the stand-in you’re looking for.

MORE: The Most Anticipated Smartphones of the Year

The Sidekick successor has a USB-C port with support for Quick Charge 3.0, a fingerprint sensor embedded in a side button, a separate side button to function as a camera shutter, capacity for two SIM cards and a 3.5mm headphone jack for true retro appeal.

Software: Android Pie, with a twist

The F(x)tec team tweaked the Pro 1’s interface so using the phone in landscape mode with its keyboard will make more sense. For instance, the gesture controls in Android 9.0 Pie that allow you to swipe between apps are only available in portrait orientation out of the box, so F(x)tec optimized the software to take advantage of those controls even in landscape mode, when the pill is on the right side instead of on the bottom of the screen.

You can also use the keyboard’s keys to toggle around the screen, using the arrows to page through text or select options on-screen.

As smartphone makers race to the future with foldable displays, F(x)tec is reaching into the past to a simpler time in technology.

I’ve become so used to typing on a touchscreen that using the Pro 1 for a few minutes felt like activating muscles I haven’t used in so long that they’ve atrophied. Maybe that muscle memory returns for those of us who once had it, but I’m not sure anyone under the age of 30 would have any interest in a thick phone that owes its size to a keyboard instead of a massive display.

And there are some trade-offs with buying a startup’s first phone, the most obvious being the Qualcomm Snapdragon 835 chip that powers the whole thing. This year’s flagship Android phones will use the Snapdragon 855, which is two jumps ahead.

But F(x)tec’s execs think some people still long for a physical keyboard. Kim Kardashian, this could be the BlackBerry replacement you’ve been seeking.