Phison kicked off the transition to PCIe 4.0 for storage in 2019, and dominated the high-end SSD market for over a year with the only available PCIe 4.0 solution. There are now several competing PCIe 4.0 NVMe SSDs and controllers that handily outperform the Phison E16, but Phison has stayed competitive by bringing out a second-generation PCIe 4.0 controller, the E18. Today we're looking at one of many drives built around that controller: the Inland Performance Plus 2TB.

The Inland brand is owned by the parent company of American retailer Micro Center. Most or all Inland-branded SSDs are simply Phison reference designs with little or no customization beyond cosmetics. Inland SSDs are frequently great value options—especially for Micro Center's in-store only deals, but even their online prices tend to be very competitive. Part of the discount comes from their tendency toward shorter warranty periods: the Inland Performance Plus has only a three year warranty despite being a high-end flagship model. Fortunately, the total write endurance rating is the same as competing drives that carry five year warranties, and the SSD hardware itself is identical to other brands selling the same SSD reference design under different heatsinks and labels.

As part of the second wave of PCIe 4.0 SSD controllers, the Phison E18 aims to use substantially all of the performance available from the PCIe 4.0 x4 interface: sequential transfers up to around 7.4 GB/s and random IO up to about 1M IOPS. Hitting that level of performance while staying within M.2 power delivery and thermal dissipation limits required migrating to 12nm FinFET fabrication from the cheaper 28nm widely used by PCIe 3.0 SSD controllers and by the Phison E16. But even so, the Phison E18 can draw more power than the E16 controller because the increase in performance is so large. Competition for the Phison E18 includes in-house controllers used in the latest flagship consumer SSDs from Samsung and Western Digital, newcomer Innogrit's IG5236 Rainier controller, and Silicon Motion's upcoming SM2264 controller.

The Inland Performance Plus does not quite hit the theoretical limits of the Phison E18 controller. The 1TB model is clearly handicapped on some performance metrics compared to the 2TB model, but even the latter is only rated for 7GB/s sequential reads and 650-700k IOPS instead of 7.4GB/s and 1M IOPS. This mostly comes down to the Inland Performance Plus and other current E18 drives using 96L TLC NAND with 1200MT/s IO between the NAND and the controller, while the E18 can support up to 1600MT/s IO. A new round of E18-based products will start hitting the market soon using Micron 176L TLC that operates with the higher IO speed and should bring some other performance and efficiency improvements. We expect some of these new drives to be announced at Computex next month. 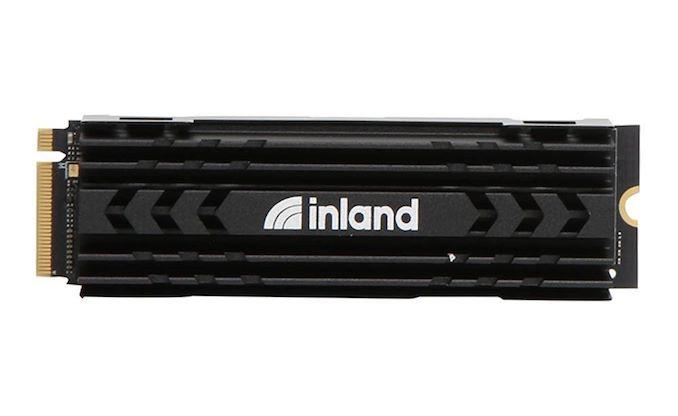 The most important competitors for the Inland Performance Plus are other Phison E18 drives and the current flagship PCIe 4.0 drives from Samsung and Western Digital. We have fresh results in this review for the Samsung 980 PRO, retested with the latest 3B2QGXA7 firmware. We've also included results from some older top of the line drives: the Intel Optane 905P and Samsung 970 PRO (their last consumer NVMe drive to use MLC NAND), and the Silicon Power US70 representing the first wave of PCIe 4.0 drives that used the Phison E16 controller.

The rest of the drives included in this review are more mainstream models, mostly PCIe 3.0 drives, some with four-channel controllers instead of the usual eight for the high-end, and even a few with QLC NAND. This includes the Inland Premium, which is based on the Phison E12S and TLC NAND.