There's no point beginning a review of the Acer Aspire S5 with a discussion of anything other than its approach to ports.

Look at the sides and back of the S5 and you'll find almost none: An SD card slot, headphone jack, and power port are the only visible connectors to the outside world.

The Aspire S5 is a pricey and powerful entry into the ultrabook market from an unlikely source.This isn't some radical approach to cutting the cord, but rather the most audacious way of hiding connectors that I've seen in over a decade of reviewing laptops. Open the lid of the S5 and push the button in the top right corner of the keyboard, the one with the baffling icon printed on it.

When you do this, a motorized hatch opens up, dropping down from the bottom of the laptop to reveal two USB 3.0 ports, HDMI, and a Thunderbolt connector. Press it again and the hatch, which is called the "MagicFlip I/O port launcher," seals back up, almost like it's getting ready to return to the alien planet from which it came. But more on all of this later.

The Aspire S5 is a pricey and powerful entry into the ultrabook market from an unlikely source. Acer is not a company you would normally associate with such a unique approach to minimalist design, nor is it a company you would think would figure out a way to wedge into this notebook dual 128GB SSD drives configured in a RAID 0 array, giving it jaw-dropping performance for the category. 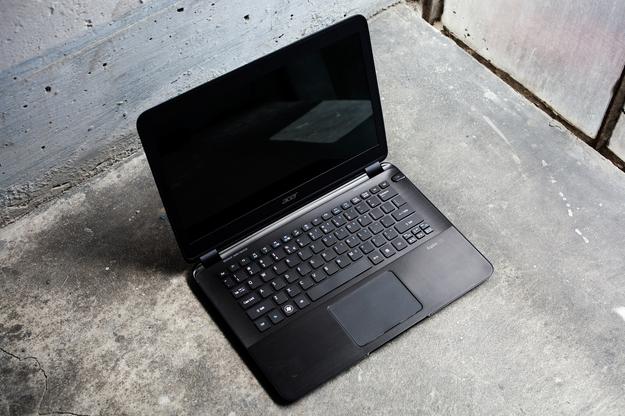 With the S5, Acer really has upped the ante on ultrabook configurations, not just with the 256GB of SSD storage but also with its 1.9GHz Core i7 CPU, a rarity in a world where Core i5 rules. The screen – 13.3 inches and 1366 x 768 pixels – is nothing special, nor are the 4GB of RAM and integrated graphics. But Acer does manage to squeeze all of the above into 18mm of thickness and a 2.6-pound chassis, which is a good 0.3 pounds lighter than a MacBook Air. Battery life, at about 4 hours, 20 minutes, is average for the category.

The Aspire S5 is a performer. In fact, it's my new recordholder on the PCMark 7 benchmark, which especially favors fast I/O systems like this one. Those speedy SSD drives also earned the Aspire S5 another testing record: The laptop takes just 16 seconds to cold boot Windows. Sure, it's no great shakes with graphics, but playing with the MagicFlip is more fun than Skyrim anyway.

By now I've probably spent hours messing with the MagicFlip hatch and remain as baffled as when I first unboxed the machine. Generally, it works, but the ominous grinding noise it makes when slowly creaking open and shut instills zero confidence. Acer says it's been rigorously tested, but I still had plenty of trouble with it. When holding the laptop at some angles, the hatch just doesn't open reliably. And if your battery is low, the hatch can become even more problematic, sometimes getting stuck with one side open and one side shut, reminding one a bit of the capsized Costa Concordia. "What if it breaks?" is a great question, and one which Acer has not fully answered.

The price premium here is ultimately what may be the bigger hill to climb. The $1,400 price tag is justified given the extra storage capacity, but it's still tough to swallow when competitors' ultrabooks can be had for under $1,000. Now if only that hatch would open and close as fast as the Aspire runs Excel....