The specifications of the new RTX 3050 Ti remind us of the direct predecessor GTX 1650 Ti at first: In addition to the Boost clock (1495 MHz for the tested model), the size of the video memory is identical as well. 4 GB GDDR6-VRAM with a 128-bit interface are pretty small in 2021, even for a mid-range GPU. Many modern games often require more than 6 or even 8 GB VRAM in higher settings, which means the situation is not ideal for the next couple of years, despite the RTX support. You should be aware of this before you buy this GPU.

Nvidia increased the number of shader units, even though they are not perfectly comparable due to different GPU architectures (Ampere vs. Turing). Instead of 1024 CUDA cores, the RTX 3050 Ti is equipped with 2560 CUDA cores, which suggests a noticeable performance advantage. This number is even higher compared to the GTX 1660 Ti (1536 shader units) and the RTX 2060 (1920 shader units), although they are both supported by 6 GB VRAM and a 192-bit interface. The new mid-range GPU is still far behind the RTX 3060 (3840 shader units), though. 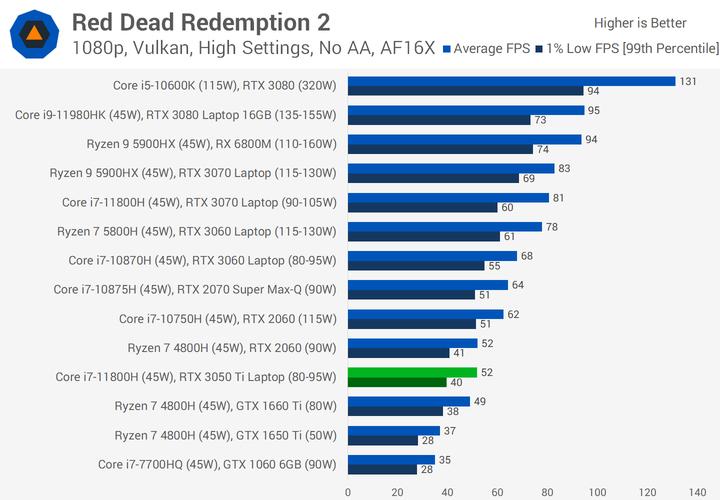 Similar to the more expensive Ampere GPUs, the RTX 3050 Ti also has a very wide TGP range, which has a massive effect on the performance. Our unit was configured at 60W (75W with Dynamic Boost), which is a medium/high value for the model (35 to 80W). Other laptops with the RTX 3050 Ti and lower TGP settings can be much slower.