Oculus Quest 2 vs. Valve Index: Which VR headset should you buy?

We're looking at the high and low end of VR headsets today as we pit the Oculus Quest 2 vs Valve Index.

VR has come a long way over the years; if you’ve finally decided to take the leap into virtual reality, you’ve chosen an excellent time to do so. Graphics are better than ever, there’s now an enormous amount of videos, apps, and games to choose from, and the technology has advanced to the point where you can enjoy intricate experiences and huge, detailed worlds rather than simple tech demos.

You’ll also want to ensure that you’re using one of the latest VR headsets, and that’s why we’re looking at the Oculus Quest 2 (first released in 2020) and the Valve Index (2019). They’re two very different VR propositions with their own clear advantages and disadvantages, as you will see. If you want to go deeper, we have an Oculus Quest 2 review, with a Valve Index review in progress. Needless to say, they both represent some of the best VR headsets around.

Worried about investing money in a new piece of tech only for support to disappear within a few short months? In the case of these two headsets, you shouldn’t be. Oculus, created specifically for VR, was purchased by Facebook in 2014. Valve is the company behind Steam, the mind-bogglingly successful PC software distribution platform. Both companies know what they’re doing when it comes to tech, and neither is in danger of running out of money any time soon. However, if money is tight for you, we have a guide to all the cheapest VR headset deals happening now.

In some ways, the Oculus Quest 2 is the VR experience you might have dreamed of as a kid. Completely wireless and with no need to plug into a PC in order to work, it’s ready to go out of the box. The headset is surprisingly light, which ensures that it’s comfortable to wear even for extended sessions. It also comes with an easy-to-fit glasses spacer for those of us with specs who don’t want to scratch the VR lenses (or indeed, our glasses).

The minimalist design of the controllers may raise eyebrows, but they’re intuitive, and up to the task of any game or app thrown at them. Unless you fork out extra cash for the “elite” version of the strap, however, fitting the headset is a fiddly affair that sees you messing around with a buckle-style loop. Fine if you’re the only one who will use it, annoying if you want to share the wonder of VR with friends and family. 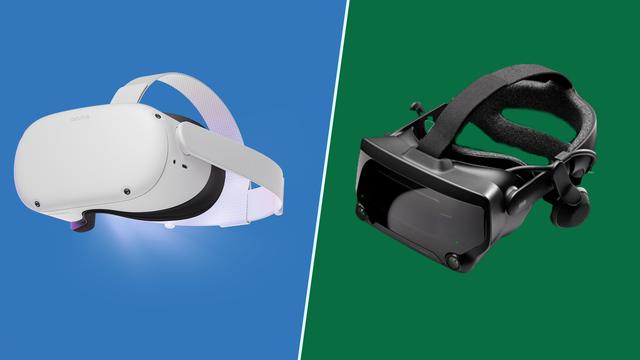 The Valve Index has a superior headset strap, with a dial to easily tighten or loosen it. There’s also a second dial that moves the lenses closer to or further from your eyes, the first indication that this is a luxury piece of kit. The second indication is that the controllers, which at a brief glance seem similar to those of the Quest 2, can track the movement of individual fingers. The number of games and apps that support this is relatively small, but it’s an impressive innovation.

However, the Valve Index is the polar opposite of the Quest 2’s pick-up-and-play experience. It does nothing by itself, depending on a PC or laptop with the required software (and specs) to function. Also, as a room-scale headset, you need sufficient space in your play area in order to place physical base stations for the headset to ‘see’. The motion tracking is very impressive, but you need to work for it.

Surprisingly, the significantly cheaper Quest 2 offers a higher resolution per eye, at 1832 x 1920 per eye versus the Valve Index’s 1440 x 1600. After this, although both headsets are capable of displaying 120 Hz, Valve’s offering starts to pull away with little trouble.

The Index offers a best-in-class field of view (more important than resolution to many VR users) of 130 degrees against the Quest 2’s 89 degrees. In addition to that, the Index’s 12GB memory is double that of the Quest 2, and the use of base stations – while a pain to set up – results in excellent space and motion detection. The end result is a luxury VR experience.

The Valve Index offers a luxury experience for what is very much a luxury price. A package with everything you need – headset, controllers, and base stations – will set you back a wallet-burning $999/£919. You do at least get the critically-acclaimed Half Life: Alyx included…

All Oculus Quest 2 games are downloaded from the Oculus store. While many former exclusives have been ported to other formats since launch, such as the three-part Star Wars experience Vader Immortal, a small number remain. Another Star Wars title for example, Tales From The Galaxy’s Edge, is (for now, at least) an Oculus exclusive. The zero gravity multiplayer future sport title Echo VR is a fun, Oculus exclusive and free!

As a headset dependent on external hardware, the Valve Index gives you access to the huge amount of PCVR games available. Specs are limited only by the hardware you’ve plugged it into, so theoretically, no VR game is out of reach (so long as your machine is powerful enough). You might not get those Oculus exclusives, but to be honest, that’s no huge loss.

Both headsets shine in different ways. If money (and space) is no object, then the Valve Index is certainly the way to go, offering as it does the most impressive experience on the market. The Oculus Quest 2 isn’t too far behind it though, and can also be connected to a PC or laptop to work as a PCVR headset if you pay extra for a relevant cable (or you can brave the wireless connection option if you’re confident about your WiFi). Pay close attention to the Oculus Link spec requirements and compatible graphics cards, however.

Overall, the advantages that the Valve Index has simply aren’t enough to justify the huge price difference, and so we would recommend going with the Oculus Quest 2. Bear in mind that linking your Facebook account is compulsory, and if you decide to delete it for any reason, you’re also deleting all of your Oculus purchases. If you’re fine with that, and a great many people are, then welcome to the world of VR.

And if you'd prefer to go console VR, check out our PlayStation VR review for more info, or our round-up of details on the next-gen PSVR 2.