However, we've seen the likes of the ThinkPad X230 before: several times, in fact. Lenovo's X-series laptops have always been high-end ultraportable machines for business travelers who need to work on the go with little compromise. This 12-incher is the successor to the ThinkPad X220, an excellent all-around ultraportable that crammed a fast processor, long battery life, and sturdy construction into a compact but not inexpensive form. The new X230 retains the X220's unusual 12.5-inch display and spacious keyboard layout, but the keyboard itself has seen a big change.

Gone is the old Lenovo ThinkPad keyboard: not just here, but in all new ThinkPad models. Instead, a clean raised island-key backlit keyboard has taken its place. Don't worry, this keyboard has been well-tested in other Lenovo laptops already.

While the keyboard is new, the tiny touch pad and red trackpoint remain stubbornly the same. And this ThinkPad remains a somewhat bulky piece of equipment for an ultraportable, one clearly meant for legacy equipment like ExpressCards and IT-friendly software deployment and security.

This is your cleaner, more modern ThinkPad: not a new ThinkPad, really, but a slightly better and more refined one. It's every bit the high-performing, ever-so-slightly thick road warrior as ever, but in a changing world where MacBook Airs and tinier ultrabooks are gaining ground, one can't help but wonder how much longer laptops like the X230 will be around.

ThinkPads have an unmistakable and seemingly unchanging design footprint. The X230 looks just like the X220 from the outside, or nearly any other ThinkPad: matte magnesium casing all around gives this laptop a strength, heft, and bulk that's unique. The X230's screen opens up a full 180 degrees on smooth metal hinges, the top lip angled down to cup the laptop and offer a place to thumb open the lid.

The X230 is relatively lightweight at 3.46 pounds, but it doesn't feel that way because it's bulky. At an inch thick, this laptop's far from a MacBook Air in terms of being wafer-thin. It's also a far cry from ultrabooks like the Dell XPS 13, but at least the chassis feels impact-resistant and rock-solid.

The big story on the new X230 is the keyboard, but the clean, raised and slightly convex keys have been seen on ThinkPads before: namely, last year's ThinkPad Edge series and X1. The large and unencumbered keys are excellent, as good as the traditional ThinkPad keyboard and then some, down to a nice clacky click and good key travel. Gone, too, are some of the busy extra buttons on the top of the keyboard: a simple row of function buttons do double duty for screen brightness, video chat and other hotkeys, while dedicated speaker and microphone mute, volume control, and ThinkVantage hotkeys lie above that. Lenovo's ThinkVantage software suite gives you one-stop access to all of the business-friendly support and system tools in one place, including troubleshooting, downloading software updates, and managing security and power settings. 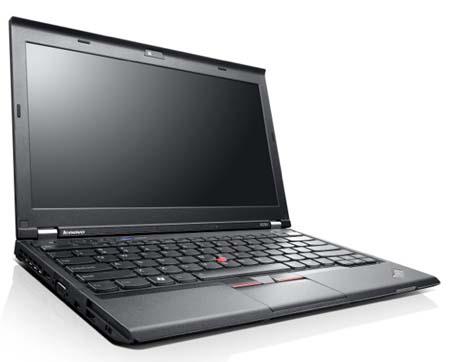 Not only does the keyboard have spill resistance (drain holes run to the bottom), but there's two forms of backlighting: two levels of LED brightness under the keys, and an overhead LED light tucked above the Web camera on the top of the upper lid. Overkill? Sure, but it's nice for in-flight use on a red-eye in case you've misplaced your USB drive.

Not so new is the red trackpoint nubbin, or the "ThinkPad Nipple." Dedicated ThinkPad users swear by them, but no one else does. The rubber point's not the problem; it's the large set of dedicated buttons above the touch pad that cramps the otherwise fine multitouch pad's usable space down to practically postage-stamp range. If you've learned how to use chiral scrolling for making your way down Web pages, you'll be fine. If you have no idea what chiral scrolling is (it's a spiral pattern you make with your finger), you'll be pissed.

ThinkPads are business laptops, and the X230 comes with plenty of security hardware and software. A fingerprint reader sits next to the trackpad; vPro technology and a suite of encryption and IT-friendly software services lie waiting to entice business use. ThinkPads often feel like the BlackBerrys of the laptop world: reliable, and full of enterprise features that many businesses don't always need anymore. A MacBook Air or an ultrabook, such as the Dell XPS 13 or HP Folio 13, fit the bill for many, and in many cases might even cost less.

The 12.5-inch display definitely feels smaller than that of a 13-inch laptop, but it's a solid step up from the more common 11-inch screen. At 1,366x768 pixels, this is the same resolution you'd find on nearly all 11- to 13-inch laptops, and a good number of 14- and 15-inch ones as well. Lenovo's screens are always clear and bright, with good off-axis viewing, and the X230's screen is no exception: that's a good thing, since the X230's screen hinge opens up a full 180 degrees. Even better, as it's a business laptop, it has a matte screen, which is better for glare-free reading (a feature sadly almost impossible to find in a consumer laptop).

Stereo speakers, a high-quality Webcam, and better microphones than you'll find on the average laptop give the X230 an edge for anyone considering heavy Web conferencing.

As with most ThinkPads, the X230 is highly configurable. New to this year's update are more USB 3.0 ports, and a Mini DisplayPort to go alongside VGA. WiMax 4G and Gobi antennas for 4G LTE or HSPA are also available. CPU options run from a 2.4GHz Core i3-2370M up to a 2.9GHz Core i7-3520M. Storage options include either a 250 or 320GB hard drive, or an SSD up to 256GB. Lenovo hasn't provided prices on all these configurations yet, but stay tuned for an update once the systems formally go on sale.

Our configuration as sent by Lenovo rings up at a lofty $1,249, which includes a 2.6 GHz Intel Core i5-3320M processor, 4GB of RAM, a 320GB 7,200rpm hard drive, and Windows 7 Professional. That's a lot to pay for a laptop with no dedicated graphics and no SSD storage.

Intel's latest third-gen "Ivy Bridge" Core i-series processors have never been touted as offering a major performance leap over last year's Sandy Bridge predecessors, and that's proven here. In our benchmark tests, the ThinkPad X230 had modest multitasking improvements over last year's X220 (which had a second-gen 2.5 GHz Core i5-2520M CPU). In single-task tests, the improvement margin grew even slimmer. It's worth upgrading to newer CPUs assuming prices are equivalent, of course, but you shouldn't go buying this year's version if you already have last year's processor.

Much has been made of Intel's next-generation HD 4000 graphics, including by myself. On this system, the improvement is harder to appreciate. Street Fighter IV played in native 1,366x768-pixel resolution at 19.7 frames per second -- hardly eye-popping. Other games play relatively well with graphics settings toned down. Then again, you're probably not meant to be playing games on your ThinkPad, assuming it was office-issued. Those wanting more oomph will still want to seek out dedicated graphics, which aren't an option on the X230.

Last year's ThinkPad X220 had a truly excellent 6 hours and 41 minutes of battery life. You get a little less this time: the X230 lasted for a still very good but not as excellent 6 hours and 4 minutes, with an included removable six-cell battery. Lenovo offers a nine-cell battery upgrade as an option, but the battery life on the X230 is still better than many ultrabooks. With proper management, it'll last a full work day.

Lenovo ThinkPads generally include a standard one-year mail-in warranty, which may not be adequate for a mission-critical computer. Several other service tiers and terms are available, including at-home service and accidental damage protection. In addition to the onboard ThinkVantage troubleshooting and driver update apps, the Lenovo Web site offers the same information, but an actual tech-support contact number can be hard to find (although chances are your company IT team would handle any problems with the system). If you do need to call Lenovo, try this 24-7 support line: 1-800-426-7378.