It looks like a pretty standard laptop, albeit a nice-looking one, with brushed black metal on the outside with nothing but a simple HP logo decorating the lid. There's silver trim around the outside, giving you a hint about the brushed silver metal inside surrounding the keyboard.

The ultrabook branding may make you think the Envy is especially thin and light; it is not. However, at a little less than an inch thick and weighing 4.5 pounds, it's certainly not huge and heavy.

Open it up and you'll see there's barely a bezel around the 14-inch touch screen, so you can more easily take advantage of Windows 8's active edges for opening the Charms bar, closing apps, or flipping through your open windows. The screen's hinges are fairly stiff, but there is still some bounce when tapping and swiping the screen (just how much depends on the angle of the screen and strength of your taps). It does not go all the way flat, so drawing or writing or using the onscreen keyboard isn't a great experience; a Windows 8 tablet or something like the Dell XPS 12 would be a better choice.

For those expecting a 1,920x1,080-pixel resolution display, you'll have to spend more money for the HP Spectre XT TouchSmart; the Envy's resolution is 1,366x768 pixels, which is what we're seeing on many sub-$1,000 ultrabooks. The quality is good with nice color and contrast, though it does invert when you're looking up at it. Off-angle viewing to the sides is fine, though.

The keyboard is shallow, so there's not much key travel. But that can be said of many ultrabooks with island-style keyboards; it's something that gets sacrificed with slimmer bodies. It's otherwise a nice keyboard, with big, square well-spaced keys.

The touch pad is big, but it lacks discrete mouse buttons. Instead you'll just see a line sectioning off the bottom of the pad for left and right clicks. The touch pad is a bit too sensitive to brushes from your palm when typing at the default settings, but it can be adjusted somewhat with its software. A double tap in the upper left corner quickly shuts the pad off.

You can also turn on and off multitouch gestures for pinch-to-zoom, rotate, and two-finger scrolling. And for those times when you don't feel like getting fingerprints on your screen, you can use the touch pad for the active edge functions of Windows 8, such as bringing up the Charms bar. 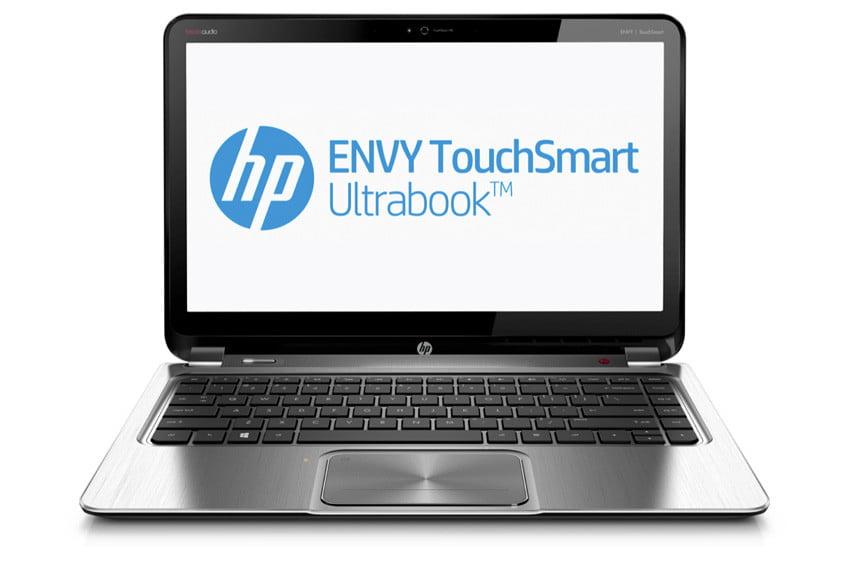 The speakers are under a grill above the keyboard and are fine for casual listening. They're capable of pushing out decent audio, but, regardless of their Beats Audio processing, you won't mistake them for a good set of external speakers.

Above the screen is an HP TrueVision HD Webcam. It works well with the bundled Cyberlink YouCam software, but you'll still want good lighting to avoid noise and off colors.

Though you won't find the Thunderbolt port that's on the Spectre XT TouchSmart, you do get a good assortment of connections. On the left you'll find Ethernet, HDMI, two USB 3.0, and a memory card reader. The right side has the power jack, a USB 2.0 port, and headphone and mic jacks. There is no optical drive or VGA-out if those things are important to you.

Pricing for the Envy TouchSmart starts at $799, but the configuration we're currently testing is $974.98 because of a step up in processor from Core i3 to i5, a backlit keyboard, and Windows 8 Pro. (Since this system is aimed at consumers and not business, Windows 8 is standard and shaves $70 off the price making it $904.98. Depending on promotions, it can be found for less.)

For that price you'll also get a 500GB hybrid hard drive with 32GB of flash memory, 4GB of 1,600MHz DDR3 RAM, and integrated Intel HD 4000 graphics. The laptop is configurable through HP, but despite what HP initially told us, options for solid-state drives and discrete AMD graphics are not available. However, you can increase the amount of memory to 8GB (1 or 2 DIMMs) or get things like an external optical drive.

The system also booted up pretty fast in less than 15 seconds. That's not as fast as SSD-based ultrabooks I've tested, but faster than a system running on only a regular 5,400rpm hard drive. Any additional demands that the touch display may have on system performance didn't seem to slow it down. Everything operated smoothly with no lag when quickly switching between Windows Desktop and Windows 8 style interface. Apps opened quickly and swiping between open windows was breezy.

The Intel HD 4000 integrated graphics, by the way, can't handle mainstream PC games all that well, but for casual games, such as those available in the Windows app store, it's sufficient.

HP claims up to 5 hours of battery life for this Envy and, going by our tests, that's exactly what you can expect. On our video playback drain test, the laptop shutdown after 5 hours and 4 minutes. Though that's certainly a very good battery life for a mainstream laptop, it is more than 30 minutes less than what you'll get from the Sony T13.

HP's Envy line gets only basic default warranty protection. In this case, that's one year of parts and labor coverage. Upgrading to two years will cost $89, while two years of accidental damage protection and on-site service (with a three-day window), is $140.

ConclusionIf you're looking for a Windows 8 laptop for everyday use with the benefits of a traditional design and a touch screen, the HP Envy TouchSmart Ultrabook 4 is a good way to go. However, it is similar in price, size, and performance to the Sony Vaio T13 Touch, so you may want to consider that one as well. The Sony costs a bit more, has a 13.3-inch screen and lacks a backlit keyboard, but has more RAM and slightly better battery life, among other things.