The latest batch of Fortnite challenges is available now as part of season 4, week 5. This week’s set of challenges aren’t too tricky, but some do require you to know the locations of specific, unmarked areas on the map. One challenge requires you to make a Stark Robot dance, which might be causing you trouble since the game doesn’t outright tell you how to do so. Not to worry, as we’ve got all the tips and tricks you’ll need to complete this challenge in just a few minutes of playing, including the locations of the Stark Robots, how to make them dance, and strategies to avoid getting eliminated in the process.

Here’s how to make a Stark Robot dance in Fortnite.

Where to find Stark Robots

There are a couple of places to find Stark Robots around the map. The most straightforward method is to search for them at Stark Industries — though, keep in mind that this area is usually very busy. You can find Stark Industries in the northern portion of the map, inside a massive circle. Generally, we recommend that you avoid going here since it gets chaotic quickly and an enemy can easily take you out while you’re trying to complete the challenge.

The other way you can find them is by going to a Quinjet Patrol, which are jets that land in random areas around the map, guarded by the Stark Robots. At the start of a match, while you’re still on the bus, you’ll see several jets fly past you that will then settle in various locations and are indicated by blue smoke. You can also spot the Quinjet Patrols on your map by a white jet icon. If you’re going to use this method, try and land at one of the Quinjet Patrols that are far away from the busy areas to avoid running into other players. From our experience, going to the farthest one is usually the best idea. 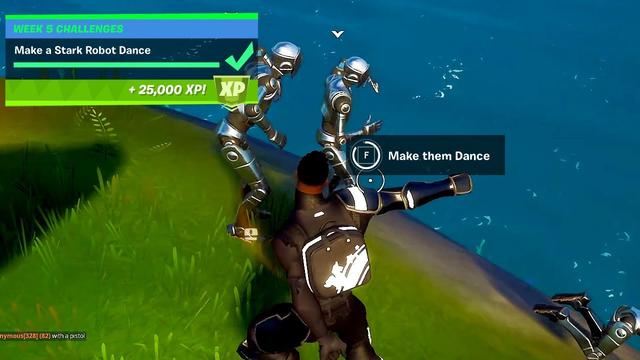 Whichever method you use, you’ll want to look out for the tall, silver robots that are hostile toward you, so make sure you come prepared with a weapon. You’ll likely find some decent gear at Stark Industries, but it’s a high-traffic area and you’ll need to watch out for other players. If you choose the Quinjet Method, try landing at a building nearby to grab some loot before heading in to take out the Stark Robots.

How to make a Stark Robot dance

Once you’ve found the Star Robots, you’ll need to take one down and hack it. Depending on the weapon you have, this is easier said than done. With a shotgun, you can down a Stark Robot in just two hits, but if you’ve got a weaker weapon, it will take more to bring one down. At the Quinjet Patrol, it’s recommended to down all of the Stark Robots so they don’t interfere while you’re trying to hack one of them.

After it’s clear, hack the Stark Robot. When it reanimates, use an emote by pressing and holding down on the d-pad and selecting the emote of your choice. If you do it close to a Stark Robot that has been hacked, it will respond by dancing back at you. As soon as the Stark Robot dances, you’ll get credit for completing the challenge. In the video above, we did get credit for the challenge, even though it doesn’t appear like the robot was dancing.

The hardest part is getting to the point in which you can hack the robot. That’s why we recommend avoiding Stark Industries if you’re strictly going for this challenge since that area can be tough to get through due to how many people tend to land there. One tip we have is to bring a friend with you — they can help you down the robots and watch your back in the process. With this being a new challenge, players tend to flock toward the robots’ locations, so they might be busier than usual.

Another thing you should be aware of is that it can sometimes be tricky to get the robot to dance if there are other enemies nearby. When they’re hacked, they prioritize taking out enemies around you, so you should make sure the area is clear before getting them to dance. Once it’s clear, spam the dancing emote, and you’ll eventually get credit for it, even if it doesn’t look like the robot actually danced.

The most common Instant Pot problems and how to fix them

The 8 best battery packs and portable chargers for traveling

Tom Brady smashed a Microsoft Surface. The NFL warned him not to do it again

Thanks, GPU shortage: A bottom-barrel graphics card is now an Amazon bestseller

How to sync smart lights to music

Common bloatware to uninstall on your new laptop

Get new tech for Christmas? Here’s how to recycle your old gadgets and PCs

Install these Chrome extensions on your relative’s new laptop