Dell XPS 12 review: A unique take on the convertible laptop/tablet

While inventive, the original Duo was hobbled by a low-power Intel Atom processor and never lived up to its potential. Dell walked away from the Duo, which seemed doomed to be another too-early hardware leap, much like Dell's long-lost proto-ultrabook Adamo laptops.

Imagine my surprise when Dell announced that the Duo was back, originally showing us the system behind closed doors this summer. The new version, now part of the high-end XPS line, has gotten a massive physical upgrade. Now it's ultrabook-thin, with a slim metal frame around its screen, and a button-free clickpad. The new version trades up to current-gen Intel Core i5 and Core i7 processors, along with solid-state-drive (SSD) storage, meaning that in terms of hardware it can stand toe-to-toe any mainstream ultrathin laptop.

Between our preview this summer and now, the biggest change has been in the name. Dell has decided to drop the "Duo" branding altogether (perhaps it still has negative connotations) and simply call this the XPS 12. That's certainly apt for a laptop with 12-inch display, but I do miss the descriptive nature of the Duo moniker -- now there's nothing in the name to indicate this laptop's special physical features.

This is one of the first laptops with Windows 8, the new touch- and tablet-friendly OS, and it's meant to be used as both a traditional laptop and a tablet. But when evaluating new hardware and new software at the same time, the question is: how much of the user experience in the XPS 12 comes from Dell, and how much from Microsoft? In an Apple laptop, it's fair to consider software and hardware together, as a single company is responsible for both. For Windows-based systems, it's sometimes hard to tell on which side of the fence the faults lie.

And, there are faults. Even though the XPS 12 is a slim, well-built, and frankly ambitious convertible, it works better as a laptop than as a tablet. In the closed, slate mode, it's obvious that the Windows 8 operating system still doesn't always know what to do with your apps and fingers. The not-Metro interface (my own shorthand name for the Windows 8 tile-based UI) works fine, but jumping into apps, even Windows 8-specific ones such as Internet Explorer 10, can yield unpredictable results.

For example, at this point, nearly everyone in the universe uses some form of Web-based e-mail, but Gmail navigation on the small screen in IE10 is tough. Shift the screen just a bit and the orientation changes, with just enough lag to be annoying. Tapping on a text field sometimes brings up the Windows 8 onscreen keyboard, sometimes not (and it takes several steps to call it up otherwise).

That onscreen keyboard is miles ahead of previous Windows ones, but the layout of some keys is counterintuitive, and I ran into just enough lag to make using the Shift and Caps Lock keys especially troublesome.

But, these are the same problems I've found on other Windows 8 systems, so is it fair to lay them at Dell's feet? On the excellent Acer Aspire S7, the touch screen was a secondary experience, mainly used for finger-swiping and scrolling. On the XPS 12, you're expected to use touch much more. And as a touch-screen laptop, the XPS 12 works well. Folded up as a slate, it's still not an entirely satisfying tablet experience.

Design and features Aside from the swiveling lid, the XPS 12 shares an overall design with Dell's other recent high-end laptops, such as the XPS 14 and XPS 15. All are thin, with full or partial metal construction and dark accents. When closed, the XPS 12 looks like any small ultrabook, although at nearly 3.5 pounds, it feels dense and sturdy. 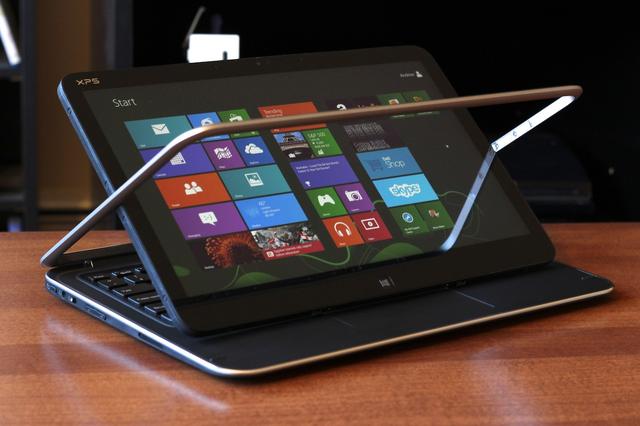 The interior is minimalist, with only the keyboard and touch pad. A power button, in the uncommon form of a slider switch, is located along the left edge, and most other functions, from the Wi-Fi antenna switch to volume control, are mapped to the row of Function keys. The wrist rest, keyboard, and keys are all matte black, with a powdery finish that resists fingerprints and nicely offsets the metal trim along the outer edge.

The XPS 12's island-style keyboard is similar to the ones found on most current laptops. In Dell's version, the keys have more-rounded corners than most, and the top row of Function keys is half-height. Typing was comfortable and accurate, and the keyboard is backlit.

The buttonless clickpad is only used when the system is set up as a traditional clamshell laptop. It's a good size, considering this is a small laptop, and works well for general pointing and navigation. But, again, Windows 8 sometimes seems to not know what to do with touch-pad gestures. With some apps and Web pages, two-finger scrolling works well, other times it's too fast and jumpy, and still other times, it's very slow. Trying to execute Windows 8 moves such as displaying the Charms bar or calling up the Taskbar is a pain on a touch pad, and I usually found myself performing these tasks via the touch screen.

The biggest feature here, as previously described, is the rotating screen. Unlike other convertible laptops with rotating screens that swivel along the vertical axis via a central hinge, the XPS 12 rotates along the horizontal axis, flipping end over end. This is possible because the screen is placed inside a thin metal all-around frame, hinged in the center of the left and right sides.

The screen mechanism feels well-designed, and it stays in the traditional laptop position without slipping. Dell says the mechanism has been tested to 20,000 cycles, and it certainly feels sturdy enough.

When you want to flip the screen, a gentle push pops it out of the frame, and it rotates freely, locking in again at 180 degrees; this leaves the screen pointing out from the back of the lid, making it easy to show your screen to someone sitting opposite you (the motion sensor automatically flips the screen image over, so everything appears right-side-up). From there, you can push the lid all the way closed, so the keyboard and touch pad are inside the clamshell but the display is pointing up, making this a slate-style tablet.

When the XPS 12 is folded down as a tablet, you can access the onscreen keyboard built into Windows 8. As I mentioned above, it's thankfully better than the onscreen keyboards in previous Microsoft operating systems, with responsive, well-spaced keys. I found the Shift key would lag a little occasionally, leading to some typing mistakes, and you'll have to spend some time getting used to the layout, which is slightly different from that of the iPad's familiar onscreen keyboard. Besides the standard keyboard layout, there are also split-key and handwriting options.

The biggest difficulty I encountered was the onscreen keyboard not popping up when it should have, in Google Docs, for example. If you need to call up the onscreen keyboard manually, it's an unintuitive procedure, requiring too many steps (slide out the Charms bar from the right side of the screen; tap Settings, tap Keyboard, then pick the style of keyboard you need).

The 12.5-inch screen has a native resolution of 1,920x1,080 pixels, which is incredibly high for an ultraportable laptop. The Windows 8 not-Metro interface scales nicely to it, but Web pages and the traditional Windows desktop view can look very shrunken. Fortunately, the display's pinch-to-zoom feature works great, much as it does on an iPad or Android tablet. That said, I found some Web sites didn't render correctly after pinching to zoom, and in Google Docs, for example, the onscreen cursor and the zoomed view didn't quite match up.

Audio was predictably thin, but fine for basic online video watching. Interestingly, the original Dell Duo had a sold-separately docking stand with bigger speakers built in.

Expandability, performance, and battery life With such a small body, the port selection on the Dell XPS 12 is likewise slim. The most notable deviation from the norm is the video output -- you get a DisplayPort output, rather than the more common HDMI.

Dell offers four base configurations of the XPS 12 (the unit I reviewed is the most expensive one). The entry-level model starts at $1,199 for a Core i5 CPU and 128GB SSD, and by adding either a Core i7 CPU, a larger 256GB SSD, or both, you can take it all the way up to $1,699. Several of the more design-heavy Windows 8 laptops we've seen have targeted that premium price range, but a $1,600 laptop is still a very tough sell, no matter how clever its engineering.

With an Intel Core i7 low-voltage CPU and 8GB of RAM, the XPS 12 was predictably fast in our benchmark tests. Honestly, if you're interested in this system, the lower-end Core i5 configurations will be more than fine for everyday Web surfing, productivity, and media playback tasks.

Battery life was, unfortunately, not the strongest in this laptop. That's a shame, as this is a slim system clearly intended for travel or use as an untethered tablet. In our video playback battery drain test, the XPS 12 ran for 4 hours and 43 minutes, which is on the low side for an ultraportable laptop -- especially one with a power-efficient SSD hard drive. Anecdotally, while using this laptop I found myself reaching for the A/C adapter more often than I'd expected.

Conclusion The Dell XPS 12 is unique among the Windows 8 laptops we've previewed and reviewed, offering a different take on the convertible laptop/tablet concept. At the same time, it's not exactly an original idea, being based on one of Dell's previous high-concept designs, the Inspiron Duo.

The flip-screen construction is surprisingly practical for sharing your screen with others, and using a touch screen with a keyboard and touch pad works well in Windows 8. But it's hard to justify spending $1,699 when the XPS 12 doesn't entirely satisfy as a slate-style tablet, even if Microsoft shoulders most of the responsibility for that. If you're in love with the XPS 12's design, I'd suggest sticking to the less expensive configurations.

Find out more about how we test laptops.