If there's one area that Windows tablets have failed, it's in giving the budget-conscious shopper something worth buying. Even lower-powered tablets and laptop/tablet hybrids are priced like a full-featured ultrabook, while failing to deliver comparable capabilities. The Asus VivoTab Smart ME400C( at Amazon) makes a strong play for the budget shopper, with a Windows tablet for only $500 that delivers solid performance and battery life. That price puts it on par with other tablets, but don't expect this tablet to replace your laptop. As a second or third device, however, the VivoTab Smart is an affordable option.

DesignThe VivoTab Smart is a small 10-inch tablet, similar to the Acer Iconia Tab W510-1422( at Amazon) or the Asus Vivo Tab RT( at Amazon), but with a Bluetooth keyboard instead of a docking keyboard for laptop functionalitysimilar to the Lenovo ThinkPad Tablet 2( at Amazon), except without the stand built into the keyboard. Weighing only 1.3 pounds, the VivoTab Smart is light enough to carry with you anywhere, and the 10.1-inch touch screen has high enough resolution (1,366-by-768) to enjoy video, do some work, and read text comfortably, making it a good device for work, play, or school.

Our Experts Have Tested 147 Products in the Laptops Category This YearSince 1982, PCMag has tested and rated thousands of products to help you make better buying decisions. (See how we test.)

The lightweight tablet has a polycarbonate plastic chassis, available in black, white, or red. Measuring 0.38 by 10.3 by 6.7 inches (HWD), it's slim enough to put in your backpack or laptop bag, all while being more accessible than your regular laptop or printed textbooks. The tablet features built-in stereo speakers with SonicMaster Audio enhancement, but the volume is quiet, even when turned up to max volume. When used with headphones, however, the volume is fine, and the sound quality is good, if not fantastic.

AccessoriesTo extend the VivoTab's usability beyond the limitations of the touchscreen, Asus also offers a separate accessory cover and keyboard for laptop-like productivity. The cover and keyboardthe TranSleeve Vivo ($49.99 list) and TransBoard ($129.99 list for cover and keyboard bundle), respectivelytake their names from Asus' Transformer line of Android tablets, which is a little confusing, since Asus' VivoTab and VivoBook devices are a different product line.

The Transleeve coversimilar in design to the iPad SmartCoveris made of stiff polyurethane, with one side felted with microfiber in order to cover the display without scratching the glass. Much like the Touch Cover on the Microsoft Surface RT( at Amazon), the cover attaches to the tablet by latching magnetically to the bottom edge of the tablet. But unlike the TouchCover, the latching hinge isn't the clean, solidly connecting dock of the Surface. Instead, the cover has a built in free-swinging metal hinge, with enough magnetic oomph to snap into place with worrisome forcethis will cause real wear and tear to the tablet chassis over timebut it lacks the tenacity to then stay in place when even a modicum of force is placed upon it.

By way of some magnet-enhanced origami, the cover folds to serve as a tablet stand, letting you prop up the VivoTab Smart on any regular table top or flat surface. Even in those circumstances, the stand is more difficult to use than it should bethe reclining angle of the tablet is slanted just enough to make it very easy to disconnect the magnetic hinge, and send the tablet sliding off, which happened several times during testing. 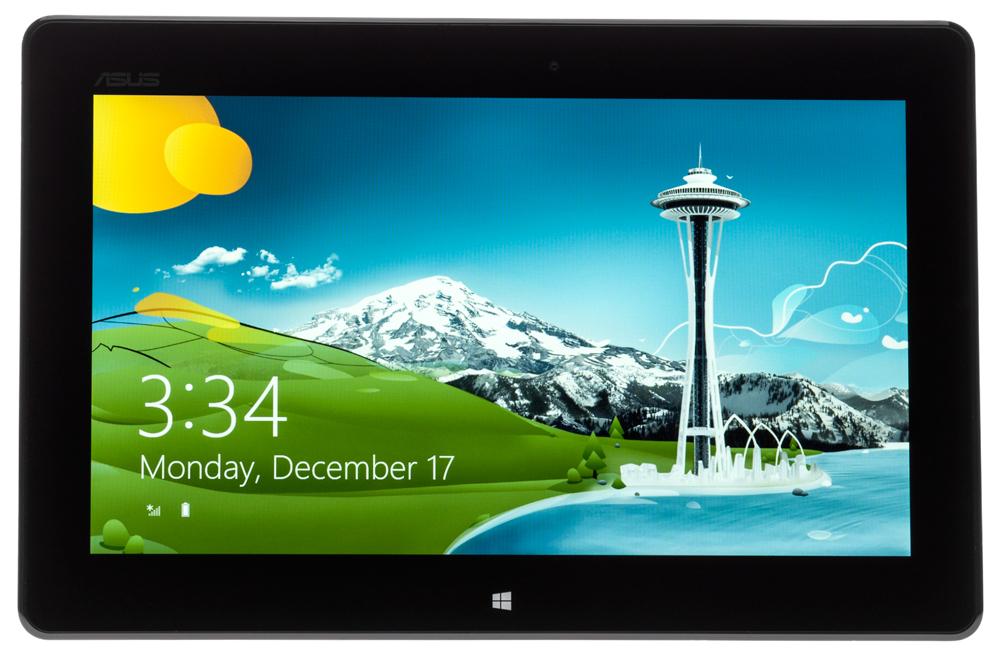 The keyboardnamed the TransBoardis a super-low-profile chiclet keyboard with a brushed metal backing. Ignore, for a moment, the cognitive dissonance caused by the fact that the $80 keyboard gets a metal backing, while the $500 tablet is backed with plastic. The keyboard and chiclet keys are wafer thin (5mm), much like Microsoft's other Surface keyboard, the chiclet-keyed Type Cover. The Transboard, however, is a Bluetooth keyboard, complete with a rechargeable battery. You can charge it using the same charging cable as the tablet, but not at the same time, meaning that you'll spend twice as long tethered to a wall outlet if you want to charge both tablet and keyboard completely. This is actually similar to the Bluetooth keyboard bundled with the Lenovo ThinkPad Tablet 2, with separate charging, though the Lenovo keyboard feels much sturdier.

That thin build of the TransBoard is flimsy enough that it bows under its own weight when you lift it by the corner. This lightweight construction made using the keyboard a nerve wracking experience, since it felt so fragile that I might damage it with anything but slow, gentle keystrokes. You'll want to stick to using it only on flat smooth surfaces, because any irregularity causes it to rock and wobble, and if it's not well supported in the middle, the flexing of the keyboard causes it to bounce a bit when you type. The keyboard touchpad is also problematic, sending your cursor skittering around at manic speeds most of the time, but slowing to a crawl unexpectedly, and sporadically failing to register any input at all.

The bottom line on these accessories? The extra expense ($129 for cover and keyboard, $49 for the cover alone) only puts the price closer to that of the Acer Iconia W510, or the Surface RT, but doesn't offer either the same level of mobile productivity or the extended battery life.

FeaturesThe VivoTab Smart has relatively few ports, even when compared with other Windows tablets. Since there is no docking keyboard, the options are limited to what can be fit into the tablet chassis. Even with those limitations, the selection feels skimpya headset jack, one micro USB port, a micro HDMI out port, and a microSD card slot. No adapters are included to convert those micro ports to full-size, so you may need to find a few adapters on your own. And, unlike your Kindle or iPad, plugging your VivoTab Smart into another PC USB port won't do anything more than charge it; for transferring files or installing programs, you'll either have to buy an OTG-capable USB adapter (sold separately), or you'll have to rely on a microSD card, cloud storage, purchases through the Windows Store, or whatever you can download on the Web.

Built into the tablet are a few sensors that have become common on Windows tablets, but that aren't seen on laptops, such as a G-Sensor (accelerometer), Gyroscope, E-compass, and magnetometer, providing all of the automatic screen rotation and positional awareness needed for many tablet functions and apps. An NFC sensor is also built in for wirelessly pairing NFC-enabled phones and peripherals, like the HP Touch-to-Pair Mouse. For network connectivity, the VivoTab Smart has 802.11n Wi-Fi for networking and Bluetooth 4.0which can be used for pairing a wireless mouse or keyboard, like Microsoft's Sculpt Touch Mouse( at Amazon) or Wedge Mobile Keyboard( at Amazon). The tablet has front-facing 2-megapixel camera for Skype and similar video chat applications, along with a rear-facing 8-megapixel camera for snapping photos or shooting video.

On the storage front, the VivoTab Smart has 64GB of flash memorytwice that of the similarly priced Surface RT, but on par with comparable, but more expensive, systems like the Acer Iconia W510-1422 and the HP Envy X2 (11-g012nr). That 64GB of storage is cut down to 33.5GB available out of the box with Windows 8 installed. Asus does bolster that small storage capacity with an additional 32GB of Asus Webstorage, free for 36 months, which can be used as either a cloud backup for your data or secondary storage, effectively doubling the storage available during use. You can always use the microSD card slot for additional storage.

Preinstalled on the tablet is Windows 8 (32-bit), which has none of the limitations on programs and apps seen on the Windows RT-equipped Asus VivoTab RT or the Microsoft Surface RT. All of your normal software will work just fine, including Microsoft Office, though that suite not bundled with the tablet. Included on the tablet are a few simple apps, like SuperNote, MyLibrary, MyDictionary, Amazon's Kindle Reader, and a selection of simple games and tools in Asus Vibe Lite. Asus covers the VivoTab Smart with a one-year warranty covering parts and labor.

PerformanceLike the HP Envy X2 (11-g012nr)( at Amazon) and Acer W510, the VivoTab Smart is equipped with a dual-core Intel Atom Z2760 processor and 2GB of RAM. As a result, performance was generally similar, scoring 1,438 points in PCMark 7, similar to the HP Envy X2 (1,429 points) and ahead of the Acer Iconia W510-1422 (1,212 points). Naturally, when compared with the likes of the Microsoft Surface Pro, which boasts an Intel Core processor, performance wasn't even close (4,786 points). Cinebench scores were similar, with the VivoTab Smart scoring 0.46 points, ahead of the Acer Iconia (0.30 points) but slightly behind the HP Envy X2 (0.55 points) in spite of the fact all three utilize the same model of processor.

While the VivoTab Smart will do the trick when browsing the Web or watching streaming video, it's not suited to take on anything more strenuousit completed Handbrake in 7 minutes 16 seconds. Though it was able to run Photoshop, but unable to complete our Photoshop test due to insufficient RAM. Like the other Atom-powered tablets we've seen lately, the VivoTab Smart was also unable to run our graphics and gaming tests.

The VivoTab Smart lasted 8 hours 30 minutes in our battery rundown test, outlasting the HP Envy X2 (7:08), or at least the Envy X2 tablet without the docking keyboard. Current detachable tablet/laptop hybrids put a secondary battery in the dockable keyboard, extending the battery life by hoursthe HP X2 lasted 12 hours 34 minutes while docked, and the Acer W510 lasted 10:27 alone and an impressive 17:50 while docked. The VivoTab Smart may not have that sort of battery life, but it will last long enough to take you through an entire day of work or school.

The Asus VivoTab Smart ME400C is considerably more affordable than the Acer Iconia W510-1422 or the ARM-powered Microsoft Surface RT, but that affordability requires sacrificing the productivity and expanded battery life a docking keyboard would add. Getting full functionality out of the tablet also requires accessories and adapters that are sold separately, narrowing the price difference, but not completely closing the feature gap. As a second or third device, the Asus VivoTab Smart ME400C offers solid performance and all day battery life, with multiple colors to choose from, making it a reasonable choice for tablet-buyers on a budget.

The Asus VivoTab Smart ME400C is aimed at the budget shopper who wants a full Windows 8 slate tablet, but it won't replace your laptop.