The Vivobook Pro 16X belongs to a new stable of Asus laptop brands -- including ProArt, Studiobook and Zenbook Pro models -- that are designed for 'creators'. The latter market encompasses hobbyists through to professionals.

My review unit features an AMD Ryzen 5000 Series processor, but the Vivobook Pro 16X OLED is also available with an Intel Core i7 CPU, along with discrete Nvidia graphics across the board. My review unit's specification costs £1,799 (inc. VAT) in the UK (~$2,417); official US pricing is not yet confirmed in detail, but is expected to start at $1,399.

The aluminium chassis is solid, with little flex evident in either lid or base. There's not a lot of style on view here, though. A striped logo on the lid, on what looks like a stuck-on label, joins a larger Vivobook label. On my slate-grey review unit this branding looks a little odd, and may look even odder on the sliver variant. The lid also collects fingerprints, so make sure your fingers aren't greasy when you carry it.

Open up the laptop and you'll notice a few more distinctive design elements. The Esc key is bright orange, almost daring you to miss it, even though it's in its usual top-left location. The QWERTY keys and separate number pad are black, while the columns of keys flanking the QWERTY keys are grey. This makes them easier than usual to locate in some lighting conditions, although with a window to your left, the far-left keys just look black. 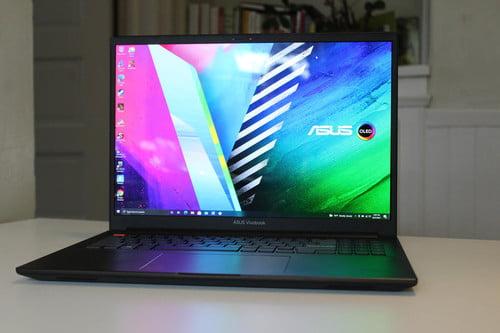 The keys have a light touch and are nicely sized. Touch-typing was comfortable and speedy. There is a fingerprint sensor built into the power button, which sits at the top right of the keyboard.

The touchpad is huge, as it should be given the screen size. It works well, and gesture controls present no issues. The touchpad also incorporates Asus's DialPad, which is fired up by swiping diagonally from the upper right corner of the touchpad (a small circle indicates where the swipe should begin).

The DialPad appears on the touchpad as a small solid circle inside a larger dotted circle, and its default action is controlling screen brightness and speaker volume. When you tap the inner circle on the touchpad, a replica appears on-screen. You sweep round between the inner and outer circles to toggle between system brightness and system volume, tap to confirm your selection, and then sweep left and right between the inner and outer circles to adjust volume or screen brightness.

The DialPad is slightly fiddly to get to grips with, but Asus has put a lot of effort into it. If you use Adobe applications, such as After Effects, Photoshop, Premiere Pro and Lightroom Classic, you can control aspects of those applications with it. More generic settings can be made in the provided ProArt Creator Hub application, which can be used to add functions including vertical scrolling, application switching, and switching between virtual desktops.

The Vivobook Pro 16X doesn't have a touch screen, and if it did some of the functions the DialPad handles arguably could be more easily accomplished. On the other hand, tie-ins with specific applications allows a degree of personalisation that some creators might find useful. As a user interface experiment, the DialPad certainly deserves time to bed in.

The 16-inch OLED screen is a delight to use. With a 16:10 aspect ratio and 4K (3,840 x 2,400 pixels, 283ppi) resolution, it's large and sharp enough for creatives to use with ease. The Pantone Validated compliance, VESA DisplayHDR True Black 600 certification and 100% DCI-P3 coverage will please those interested in the visual arts -- and while the screen is reflective, it's not overly so.

It's a shame Asus could not have made the screen bezels a shade smaller, but at least there's room on the top edge for a webcam with sliding privacy cover, while the bottom bezel isn't exactly huge. Asus claims a screen to body ratio of 86%, although we calculated it at 79.5%.

SEE: Windows 11 FAQ: Our upgrade guide and everything else you need to know

The screen has 550 nits peak brightness, which might not be enough if you need to work outside in bright sunlight. It's fine for use indoors in normal (not too bright) office lighting, though.

The stereo speakers output from the underside of the laptop via grilles that are slightly raised from the surface as they are on the upward curve of the front of the base. Sound quality is reasonable, but top volume is nowhere near loud enough, which is a shame.

My review unit ran Windows 10 Home (upgradable to Windows 11 in due course) on an AMD Ryzen 9 5900HX processor with Nvidia GeForce RTX 3050 Ti graphics. It had 32GB of RAM and a 1TB SSD, and there's also a built-in MicroSD card reader.

On the right edge, the MicroSD card reader is joined by a USB-A port, a full-size HDMI connector, a USB-C port and a 3.5mm combo audio jack, plus a round-pin power connector. The left edge has two more USB-A ports. If you want Thunderbolt support, you'll need to look at the Intel version of this laptop.

Powering a large OELD screen from a battery is a challenge, but some creative users will need to use the Vivobook Pro 16X away from a mains power source. Fortunately, the laptop's 96WHr battery does a very good job. On one typical test, I worked for three hours with a mix of mainstream workloads -- video and audio streaming, social feeds and document editing. The battery depleted to 72% from a full charge, suggesting total battery life of around 11 hours.

Admittedly this laptop is intended for a stiffer challenge than my standard workload mix, but I'd still be confident of all-day battery life and then some.

The Asus Vivobook Pro 16X might benefit from more attention to the hardware design, but it's solidly built and there's a lot to like under the surface. Battery life is great, the OLED screen is superb, and the keyboard is comfortable to use. The latter's colour scheme may be unusual, but that doesn't detract from its usability.

The DialPad has potential, although some may find it a bit fiddly to get on with, and it's a shame the speakers are somewhat underpowered. The price is high, but content creators may find it well worth the outlay.