Ultra-compact form-factor (UCFF) machines have been one of the major drivers in the resurgence of the PC market. The trend was kickstarted by Intel's NUCs in the early 2010s. These PCs have usually relied on low-power processors with compelling performance per watt metrics. AMD was largely absent in this market till the introduction of the Ryzen processors. While ASRock Industrial was one of the first to release a UCFF mini-PC based on the first-generation Ryzen embedded processors, multiple OEMs have lined up to utilize the second-generation AMD processors in their own high-performance mini-PC lineups.

The PN series represents the range of UCFF PCs from ASUS. The ASUS PN30 (a fanless PC based on Carrizo-L) was introduced in early 2020 as AMD's sole representation in the PN series. This was followed up in Q3 2020 by the ASUS PN50, and more recently, the PN51. While the PN30 was a low-end offering, the ASUS PN50 (which we are looking at today) makes a play for the high-end market by using the Renoir APUs in the Ryzen 4000 mobile series. The focus of the PN series in general, and the PN50 in particular, is more on small and medium-businesses rather than the home consumer base.

This is not our first look at the Renoir APUs in the NUC form-factor. We had reviewed another Ryzen 7 4800U offering in the ASRock Industrial 4X4 BOX-4800U late last year. Since then, Intel's Tiger Lake-based UCFF PCs have been introduced into the market. The electronics industry supply chain is continuing to face challenges, requiring business consumers to line up and qualify multiple options for deployment. This review provides a comprehensive evaluation of the performance and value proposition of the ASUS PN50 in this context.

Small form factor PCs have become one of the top choices for installation in business environments. Thanks to continued improvements in processor computing power as well as power efficiency, scenarios that require traditional tower desktops have shrunk considerably. UCFF systems fulfilling business requirements such as remote management and ease of deployment have become widely deployed in SMBs and SMEs. Intel's vPro offerings have been the mainstay in this market segment, with AMD's adoption of DASH for out-of-band client management enjoying comparatively limited success.

After the introduction of Zen 2-based APUs, there has been renewed interest in SMB / SME UCFF PCs based on AMD's processors. Thanks to TSMC's 7nm process and AMD's revamped microarchitecture, the Renoir APUs based on Zen 2 were able to offer stiff competition to Intel's flagship processors. In addition to retaining the multi-core leadership, the improvements enabled Renoir to to challenge Intel's offerings in in both single-threaded performance and power efficiency.

AMD prioritized the delivery of Renoir APUs to the notebook market, with mini-PCs following soon after. ASRock Industrial and ASUS were the first ones to launch UCFF systems based on these parts. Similar to the 4X4 BOX-4000 series of ASRock Industrial, the ASUS PN50 has four SKUs with CPU core counts of 4 (Ryzen 3 4300U), 6 (Ryzen 5 4500U), 8 (Ryzen 7 4700U), and 8 (Ryzen 7 4800U). The last one is the flagship in the Ryzen 4000 U-series, with the highest core count and fully enabled GPU, and the ASUS PN50 with the Ryzen 7 4800U is the one being looked at in this review. 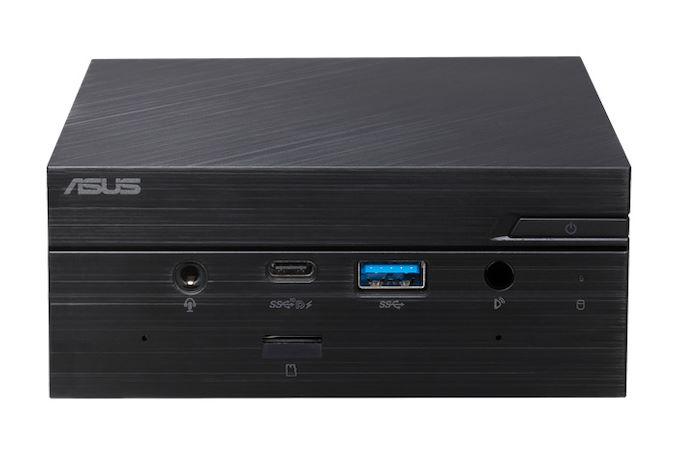 The ASUS PN50 employs a well-ventilated plastic chassis measuring 115 mm x 115 mm x 49 mm to house the Ryzen 7 4800U SoC. This is an octa-core processor with SMT enabled (8C/16T) capable of operating with a TDP configurable between 12W and 25W. While the PN50 is available as a barebones PC from various e-tailers, ASUS has pre-built ready-to-deploy configurations for B2B customers - evident from the memory and storage options presented in the product technical specifications page. The company sampled us with a mid-tier configuration using the Intel SSD 660p and SK hynix DDR SODIMMs. The full specifications of our ASUS PN50 review configuration are summarized in the table below.

An overview of the chassis design and arrangement of different ports is shown in the gallery below. It must be noted that the full-sized DisplayPort output in the rear panel is a configurable port. Models sold in the e-tailer channel in the US have this video output, but models elsewhere could replace it with a 2.5Gbps Ethernet port, or a serial port. Customization is possible for B2B consumers with specific requirements for large-scale deployments.

The B2B version of the ASUS PN50 comes with Windows 10 Professional x64 pre-installed. Barebones buyers can install their OS of choice. BIOS updates and Windows drivers are available off te product support page. One of the key differentiation aspects of the ASUS PN50 over other UCFF PCs is the bundling of a wired keyboard and mouse in the package. While the build quality of the two components are just passable, they do help IT personnel in quickly deploying a system from a single package. In addition to the main unit, the other components of the package include a compact 90W power adapter (19V @ 4.74A), US power cord, a VESA mount, and associated screws.

Setting up a barebones system or getting access to the build components is as simple as popping off four screws from the underside of the chassis and sliding off the bottom panel. It must be noted that the 2.5" drive is mounted to this underside, and the act of sliding enables the SATA drive to connect to the pre-installed SATA drive receptacle in the main chassis. Slots for installing the SODIMMs and the M.2 SSD are also evident after opening up the unit.

As for networking support, the PN50 is equipped with an Intel AX200 Wi-Fi 6 adapter, which is common in contemporary high-end UCFF systems. ASUS also has certain configurations with 802.11ac Wi-Fi or even no Wi-Fi at all, but those are for specific B2B models not sold in the US e-tailer channel.

On the wired side, ASUS offers a single gigabit LAN port with the PN50. For customers who need faster wired networking, they do offer a custom option to install a 2.5 GigE adapter in place of the DisplayPort output. But again, this is only for custom configurations.

In the table below, we have an overview of the various systems that we are comparing the ASUS PN50 against. Note that they may not belong to the same market segment. The relevant configuration details of the machines are provided so that readers have an understanding of why some benchmark numbers are skewed for or against the ASUS PN50 when we come to those sections.

The next section provides the platform analysis - in particular, the differences compared to the ASRock Industrial's 4X4 BOX-4000 series products. This is followed by sections dealing with performance benchmarks before moving on to some discussions on power consumption and thermal performance.