Now, it’s a convertible display, similar to what we’ve seen from HP’s Elite Folio and Acer’s ConceptD Ezel series. By changing the form factor, it allows Microsoft to keep all of the components in the base, rather than in the display. This allows for a more powerful CPU (35W instead of 15W or 20W), and of course, graphics are better this year too.

When is the Surface Laptop Studio release date?

The Surface Laptop Studio began shipping on October 5th. It’s a fresh new product that’s sure to be exciting to Surface fans, so you might experience delays if you don’t get your order in early. On top of that, Microsoft tends to be conservative with manufacturing new products like this.

The launch of the new laptop coincided with the launch of Windows 11, of course. In fact, while there are several devices that arrived alongside the new OS, you could make the argument that the Surface Laptop Studio was the hero device.

If you want to see one in-store, you’ll have to go to your local Best Buy, as there are no Microsoft Stores anymore. Of course, you can order it online from a variety of retailers.

What is the price of the Surface Laptop Studio? 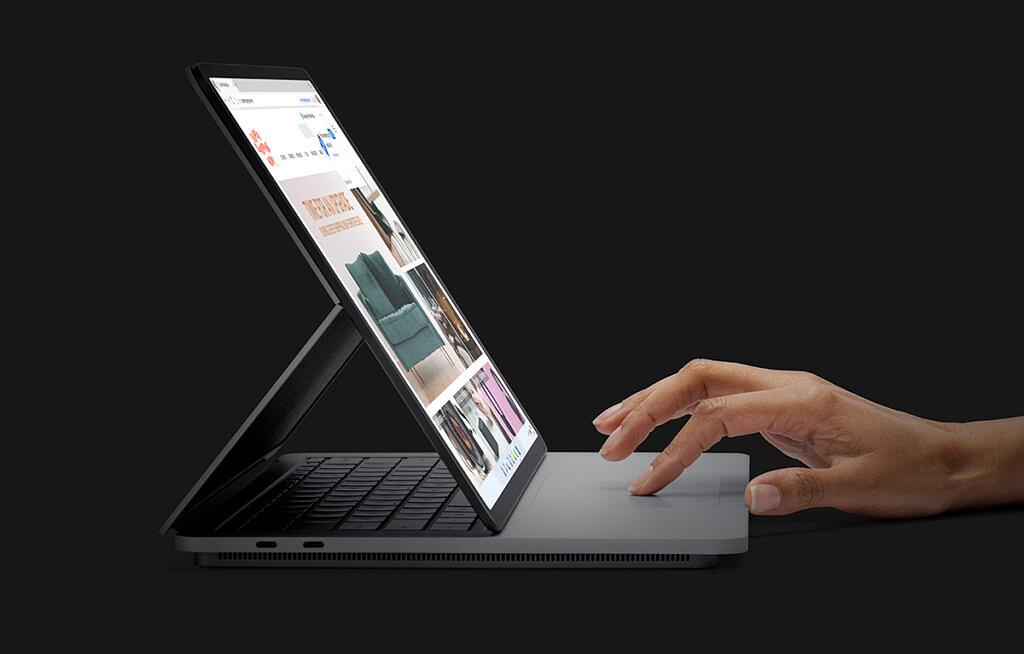 The good news is you don’t have to buy a keyboard separately, like you would with the $1,099.99 Surface Pro 8. However, you might want to buy a Surface Slim Pen for $129.99, and it’s now stored in a pen garage underneath the device that charges it wirelessly. Another possible add-on is the Microsoft Complete extended warranty.

The best way to describe the Surface Laptop Studio is probably that it’s like a smaller Surface Studio. You can use it like you can a regular laptop, and then the display pops out and you can fold it down to be used as a tablet. There are many benefits to this.

First of all, it allows Microsoft to use more powerful hardware. With the Surface Book, everything except for the GPU and one of the two batteries had to be stored in the display, as the screen had to be able to be detached and still function. Moving those parts to the base offers a bunch of benefits.

The other thing is it’s more ‘lappable’, a word coined by Surface chief Panos Panay when he used to try and prove that a Surface Pro tablet with a kickstand could easily be used on one’s lap. But when the team unveiled the Surface Book, that wasn’t very lappable either. The problem was that it was just so top-heavy. I’d bring it to events and actually hold the thing down with my palms while typing. Now the guts of the PC are where they should be, that’s not an issue.

The Surface Laptop Studio has a screen that goes up to 120Hz. The spec sheet actually says “up to 120Hz” though, and that’s because it actually ships at 60Hz. You’ll have to turn on the 120Hz refresh rate. It’s actually going to have dynamic refresh rate at some point, but that’s coming later.

The refresh rate is quite literally how often the display refreshes. The higher the refresh rate, the smoother the motion looks. Of course, it also chews up your battery life, as you’d probably expect. That’s where dynamic refresh rate comes in.

Dynamic refresh rate turns it up when you’re doing something that can take advantage of the higher refresh rate. But it can also turn it down when you don’t need it, saving on power. But again, this feature is coming later.

The Microsoft Surface Laptop Studio comes with Intel’s Tiger Lake H35 processors, along with up to an NVIDIA GeForce RTX 3050 Ti, or an RTX A2000 in the business model. In fact, this is the first time the consumer model has included RTX graphics, so that’s kind of a big deal. Still, being a 3050 Ti, it’s the next logical step from the 1650 that was in the Surface Book 3.

H35 processors are new to Intel’s 11th-generation lineup. Previously, H-series chips were a minimum of 45W, and were found in thicker and bulkier PCs like gaming laptops and mobile workstations. Those 45W chips still exist, but Intel announced these 35W SKUs so companies could make more powerful laptops that were still thin and light. That’s where the Surface Laptop Studio comes in.

Still, if your Microsoft Surface Laptop Studio needs to be serviced and replaced, you’ll be able to bring your storage with you.

Yes, Microsoft is finally including Thunderbolt in its premium products. The company had cited security issues in the past, and hasn’t said what’s changed in order for it to change its mind. But it doesn’t matter because it’s finally here. And indeed, for years now, Microsoft has been the only OEM making premium PCs that don’t have the technology.

With Thunderbolt 4, you can boost up the power of the Surface Laptop Studio with an external GPU, or you can connect to dual 4K displays or one 8K display. It’s also good for 40Gbps data transfer speeds.

Where can I buy the Surface Laptop Studio?

You can buy the Surface Laptop Studio at the usual places, including the Microsoft Store, Amazon, Best Buy, and more. At launch, it’s going to be limited to the United States and Canada.

Does the Surface Laptop Studio have Thunderbolt 4?

Yes. This generation of Surface products is the first to sport any kind of Intel’s Thunderbolt technology. For Surface fans, it’s something that’s been missing for a while, as Microsoft was the only company that was releasing laptops that start at $1,599, but still didn’t have Thunderbolt.

Does the Surface Laptop Studio have dedicated graphics?

Yes, as long as you get the Core i7 model. As we’ve seen with past Surface Books, the Surface Laptop Studio uses integrated graphics, known as Iris Xe on 11th-gen processors, in the Core i5 model. This could be one reason for using H35 processors instead of H45 chips, as the H35 processors actually have better Iris Xe graphics.

Once again, the business model is offered with a different dedicated GPU, with an RTX A2000 with 4GB GDDR6. The 15 inch Surface Book 3 for Business did the same, packing Quadro RTX graphics.

What regions is the Surface Laptop Studio available in?

At first, the Surface Laptop Studio is only be available in the United States and Canada. Microsoft will open up sales in more regions at some point, but there are several factors holding it back on day one. One of them is the global chip shortage, but also, the Redmond firm likes to start conservatively when it has an entirely new product. It’s still a bit gun-shy from when it ended up with a warehouse full of Surface RT tablets.

Does the Surface Laptop Studio have 5G or 4G LTE?

No. For some reason, Microsoft only ever puts cellular connectivity in tablets, rather than other kinds of portable PCs. The Redmond firm has never publicly stated any actual reason for it. Perhaps it thinks that if you’re using a laptop, you must be somewhere with a strong, secure, and fast Wi-Fi connection.

It wouldn’t surprise me if this changes in some future generation. Obviously, cellular connectivity is a key feature for businesses. That’s why Lenovo’s ThinkPads, HP’s EliteBooks, and Dell’s Latitudes all have either 4G LTE and/or 5G.

Does the Surface Laptop Studio come with Windows 11?

Does the Surface Laptop Studio come with a pen?

No. The bottom-front of the device is specifically designed to magnetically hold the pen, but the pen is still sold separately. You’re going to need the Slim Pen 2 for $129.99.

To be clear, Microsoft hasn’t included pens in the box with Surface hardware in years. You’ll need the Slim Pen 2, which will run you $129.99.

Does the Surface Laptop Studio come with a charger?

The Microsoft Surface Laptop Studio comes with a charger that connects to the Surface Connect port. If you get the Core i5 model, it comes with a 65W charger, while the Core i7 variant comes with a 102W charger. Naturally, you can also use either of the Thunderbolt ports if you want to use a standard USB Type-C adapter. The reason for the higher wattage on the Core i7 model is because it needs that extra power for the dedicated GPU.

What configurations is the Surface Laptop Studio available in?

The Surface Laptop Studio comes in five configurations, two with a Core i5 and three with a Core i7 and the dedicated GPU. Here’s the full list.

The Surface Laptop Studio comes in any color you want as long as it’s Platinum. Like the Surface Book before it and older Surface Pro models, it’s made out of magnesium. That means you’re not going to see this come in a bunch of pretty colors like we see from the Surface Laptop. Maybe there will be a black model some day like they did with the Surface Pro, but that’s it.

Does the Surface Laptop Studio have a good webcam?

Yes. The Surface Laptop Studio comes with a 1080p webcam, something that’s been a staple of Microsoft Surface products since 2014. It’s actually a highlight of the product, since a lot of companies are still coming out with brand-new laptops that only have 720p webcams. It’s also got dual far-field studio mics and quad omnisonic speakers with Dolby Atmos, so the overall meeting quality will be great.

Does the Surface Laptop Studio have Windows Hello?

Yes. It has an IR camera for Windows Hello facial recognition. Like the FHD webcam, the IR camera has been a staple in Surface products since Windows Hello became a thing in Windows 10. The only exception is the Surface Laptop Go, which has a fingerprint sensor instead.

Not at launch. When Microsoft announced Windows 11, it did show off Android apps, which will be delivered via the Amazon Appstore. The feature has been delayed, and Insiders will be able to test it out later this year. Once it makes it through preview, the Surface Laptop Studio will be able to run Android apps; it’s just a question of when.