When NVIDIA first demonstrated Shield Tablet in 2014, it was not impressive - then a lot of tablets on Android came out, and all of them were far from Google Nexus 7. Although, Shield Tablet stood out its appearance among others.On a review of the NVIDIA Shield Tablet K1 tablet.

Now that Google has switched to create large tablets to compete with Apple iPad, and others have a chance.

Nvidia Shield Tablet K1-an 8-inch tablet with an impressive resolution of the screen of 1920? 1200 pixels that fits in the palm of your hand.There are almost all the necessary functions, double speakers, microSD, for a long time of battery life and a quick interface.Thanks to the pure Android Nougat, the impression is almost like from Nexus.

Shield Tablet K1 costs $ 199 (11.500 rubles), and is an ideal balance between power, functionality, price and appearance.

The anti -slip coating of the rear panel of the Shield Tablet K1 helps the device to lie reliably in the hand, but it is too easily covered with fingerprints.At the back we see a 5-megapixel chamber and a shiny shield logo in the center, which is released on the matte surface.

On the front side is the front 5-MP camera and two speakers that do not exceed the Bluetooth column jBL Charge 2 or UE Boom 2, but as a small tablet-the sound is excellent.Above the screen is a 3.5 mm headphone connector.

All ports of Nvidia Shield Tablet K1 are located in the upper part, the buttons are located on the right.Since there are no physical buttons on the front side, it is sometimes difficult to understand how to turn on the tablet or adjust the volume.The best landmark will be the front camera.

The connectors available here are MicroUSB, MicroHDMI output and Microsd memory card up to 128 GB of cards.

Unlike the first version, Tablet K1 of the speakers of speakers is covered with rubber.It is not entirely clear why this was done - the sound did not become worse, and small garbage sticks.The rubber surface spoils the view of the smooth plastic edge below.

The NVIDIA Shield Tablet K1 is installed by the Android 7.0 Nougat operating system, which means that it has all the latest functions available on Android, such as the mode of several windows and the energy -saving sleep mode - DOZE.

The productivity of the tablet is provided by: the mobile processor NVIDIA TEGRA K1 with a frequency of 2.2 GHz and four nuclei ARM Cortex A15;graphic chip with architecture Kepler and 192 cuda nuclei;RAM DDR3 with a volume of 2 GB.

In Benchmark, K1 is superior to many more expensive smartphones and tablets, including the first Shield with Tegra 4 and an active cooling system, which has still been considered one of the most powerful Android planks.

In Geekbench 3, Shield Tablet K1 scored only 1.147 points in a single -core test, which is slightly less than the Samsung Galaxy S6 result, but more than the Nexus 6 and OnePlus 2. 3.451 points, and this is more than the more expensive NEXUS 9 and listed abovedevices.

The superiority of K1 over the first Shield in Passmark and GFX Bench Trex is 50%, and in the 3dmark IceStorm Unlimited test - as many as 90%.This is incredible when you consider that the tablet does not have coolers and a 2-volt TDP. 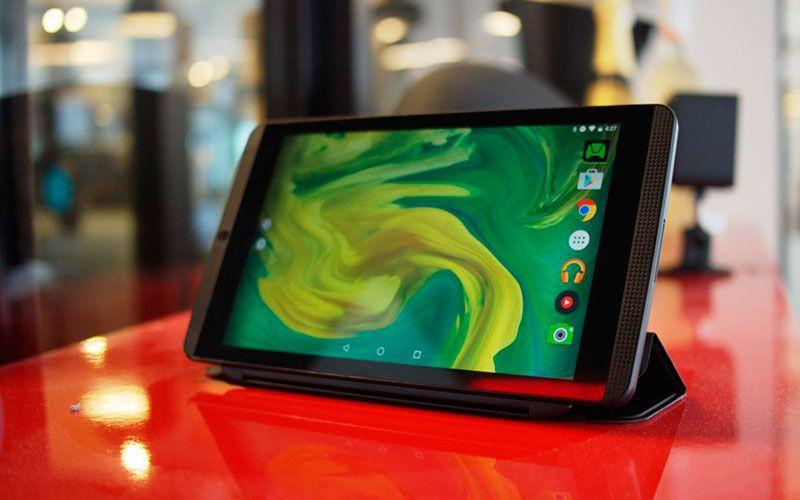 The battery capacity is 19.75 W/h-enough for 10 hours of watching video and web surfing, or 5 hours of games.The energy reserve is enough for use throughout the day, but every night you will have to put the device for charging.

For a full -fledged game, you will need a wireless controller from NVIDIA.It is sold separately for $ 60 (3.500 rubles), the controller weighs 312 grams, the location of the buttons here is like in the control panel on the original Shield, but it seems easier and more convenient.Usually, Android controls operate through Bluetooth, but NVIDIA uses the Wi-Fi Direct standard-according to the manufacturer, so they achieved 2 times a faster response and higher throughput.

There is a built-in microphone and a 3.5 mm headphone jet.You can connect up to four controllers to the device, which is very useful when connecting the tablet to HDTV in console mode.

Other unique features are the capacitive sensory keys of Android Home, Back and Play.A large green button launches Nvidia Hub Shield.There is also a small triangular touch panel that allows you to control the tablet from afar.A strange idea - it would be better if the trackpad was square and corresponded to the size of the Nvidia Shield Tablet K1, otherwise it is inconvenient to interact with it.During testing, the volume button stopped working with us.

There is not enough vibration - NVIDIA justifies that this helped to make the controller easier, and that on the original Shield, there was no such function either.But now, there is not even a screen here, so the lack of vibration is disappointed more.

In addition to the NVIDIA controller, you will have to buy a stand.As on most tablets, the magnet in the cover extinguishes the Shield Tablet K1 screen when closing, but installing it in a standing position (as a stand) is quite difficult.The cover is available in black, it looks stylish, recalling the iPad Smart Cover.You will have to pay for it $ 39 (2.300 rubles).

The fact that Nvidia Shield Tablet K1 is much cheaper than the original Shield Tablet, negatively affected the configuration - Nvidia saved everything.You need to buy a microUSB cable separately and a power supply, and the charger costs more $ 29 (1,700 rubles).

Unlike the previous model, the stylus does not come in the kit, although the application for editing photos and drawing “NVIDIA DABBLER” is preinstalled in the tablet.Many users really do not need stylus, so we do not condemn its absence.

NVIDIA Shield Tablet K1 is primarily a game tablet, so it is surprising that the controller does not come in the kit.Perhaps NVIDIA tried to take into account Microsoft errors with Kinect and Xbox One-after all, many gamers are more important than functionality, and not everyone needs a controller, which is used only in about 400 Android games.But the most top games are supported.

Here, not only Google Play games are available to you.Like the original Shield, the Gamestream technology on Shield Tablet K1, which allows you to transfer games from a computer to a tablet in stream mode.

At the moment, GameStream supports more than 100 games, including Batman: Arkham Origins and Titanfall.There are hundreds of more games on Steam and Origin, in which you can use controllers - but not the one that is available for Shield K1.

Is it worth buying Nvidia Shield Tablet K1 if you already have an original shield (now renamed Shield Portable)?Probably not.If you need a new tablet with high performance in games, Shield Tablet K1 will be the best option.

It can be compared with the Nexus 7 of the second generation and even the iPad mini 3. In Nvidia for the sake of saving, they did not turn on the cover and controller, but it would be better if the tablet was a little more expensive, but immediately went with the most necessary accessories.In any case, Tablet K1 impressed us, we boldly recommend it.

You may be interesting