On Wednesday, Microsoft held its event in the fall of 2021, presenting a large update of the entire Surface line, optimized for the upcoming update of the Windows 11 operating system.

His new collection demonstrates a new variety of products adapted to the unique needs of users.Here are the biggest announcements of the event:

On the eve of the release date of October 5, Microsoft covered the features of its Windows 11 operating system and demonstrated how the update will work on its new line of devices.

Although most of the information about Windows 11 was available earlier, observation of the system in action made it possible to see its impressive possibilities from first -hand.In particular, now users will be able to configure their windows using Snap models and improved multitasking tools, the Microsoft Teams chat was integrated into the taskbar, new personalized AI -based widgets were introduced, Microsoft Store was redesigned, and the system has now become better optimized for speed, efficiency and improved interaction with the touch screen, digital pen and voice input.

Microsoft said that the free “phased” deployment of Windows 11 will begin on October 5, and it is expected that by mid -2022 all suitable devices will be offered an update.

Surface Laptop Studio is the embodiment of a powerful portable computer with a separate hinge behind the middle of the screen, which allows users to tilt the elegant 14.4 -inch touch screen and easily switch between the functions of the laptop and portable canvas.It is equipped with quad-core Intel Core processors of the 11th generation series and a NVIDIA GeForce RTX 3050 TI graphic processor and offers update up to 120 Hz.There is a HD 1080P video camera and two studio microphone, as well as updated Dolby Atmos speakers.He also offers up to 19 hours of autonomous work. 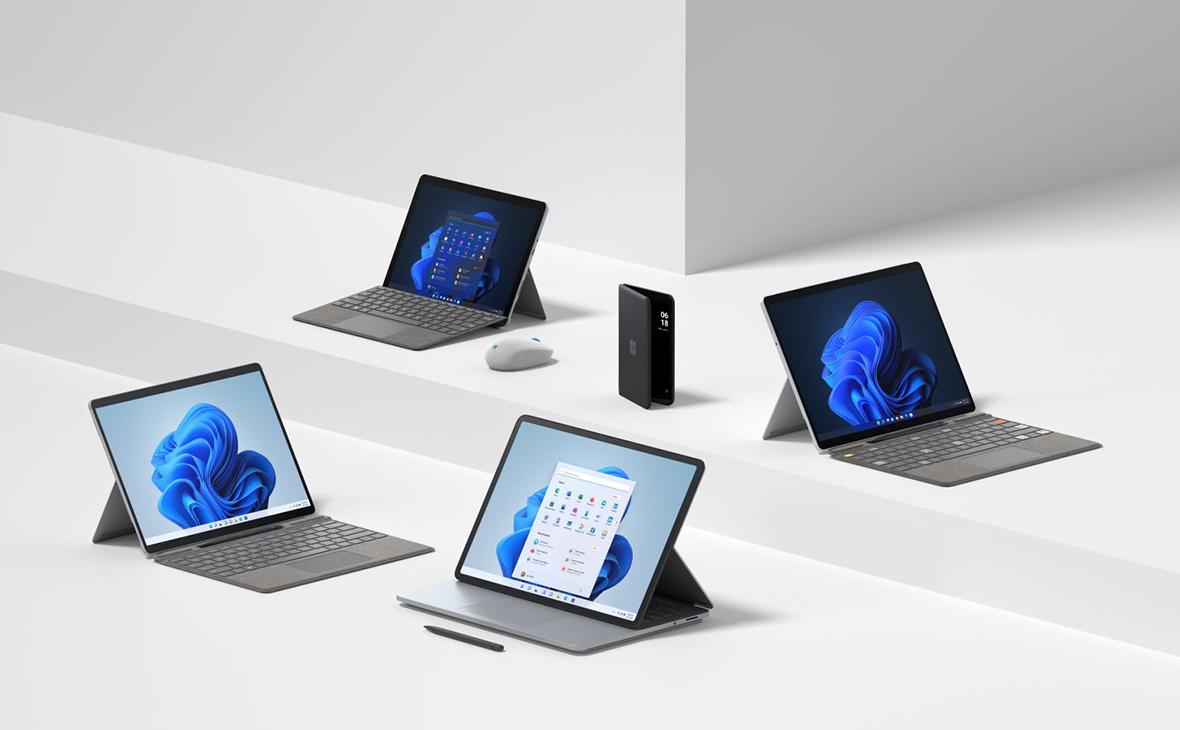 Surface Pro 8 was redesigned to combine the power of the laptop with a tablet flexibility, with a large 13-inch touch screen from edge to edge, Thunderbolt 4 ports, more stable CPU performance and faster graphics, studio microphones and optimized speakers and the head of the HD cameraWith video support 4K.It is available for preliminary order online at a price of 1099.99 US dollars.

Surface Pro X will soon be available in the option only with Wi-Fi, and its new initial price will be $ 899.It is equipped with a 13-inch sensor screen PixelSense with high resolution, built-in stand and a 5-megapixel front camera with HD-video 1080p.

A completely new Surface Go 3 is the most portable Surface option, optimized for digital pen and sensory input.It is equipped with a touch screen with a high resolution of 10.5 pixelsense and adjustable stand, Intel Pentium or Intel Core i3 processor to choose from, front and rear chambers of HD 1080P and magnetic mount for stability when folding the keyboard.It starts with 399.99 US dollars.

Combined Surface Duo 2 display with a diagonal of 8.3 inches and two screens allows you to launch two sides on the extended possibilities of multitasking, and also allows them to drag them between the screens.He also now offers a 5G connection and a dynamic chamber with three lenses - 12 megapixels are wide -angle, 12 megapixel telephoto lens and 16 megapixel is a super -richell - together with a front chamber for 12 megapixels.Now it is available for pre -order for a price of $ 1499.99.

Surface Slim Pen 2 is the best pen of the company today, with a built -in tactile engine, a more acute pen tower and a more ergonomic design.It has excellent sensitivity to pressure to increase accuracy, is reliably stored and charged within the new Surface line.It is available for 129.99 US dollars and is already available for preliminary order.

In addition, Microsoft improved the availability with Surface Adaptive Kit, which includes a number of accessories developed in cooperation with people with disabilities.There are tactile marks, port indicators and openers to facilitate work with devices.