How iPad mini 6 (2021) differs from the previous generation

The most unexpected novelty at Apple's first fall presentation was the updated iPad mini.

The compact tablet, following the iPad Pro and iPad Air, has moved to a new frameless design and began to look quite modern. The previous generation iPad mini was released back in 2019.

It's time to compare the old and new "mini" to understand who should buy this tablet today.

iPad mini 5 measures 203.2 x 134.8 x 6.1mm. The tablet weighs 300-308 g (difference in models with and without LTE). The device is comfortable to hold with one hand for reading or viewing content. When working, you have to use a second hand.

A significant part of the front panel is occupied by the display. At the same time, part of the space above and below the screen is practically not used.

Three colors were available upon purchase: silver, space gray and gold. The latter belonged to the old “rich” style color palette, now such models look a little foreign in the Apple ecosystem.

This made it possible to reduce the dimensions of the device to: 195.4 x 134.8 x 6.3 mm. The new “minicom” weighs 297 g. The width of the device has remained the same, but the thickness has slightly increased. If before that it was convenient for you to hold the iPad mini with one hand in portrait orientation, it’s not a fact that this will happen with the new product.

At the same time, the edges became “sharp” without smooth lines and fillets. Before buying, be sure to hold the device in your hands. Some people will find the new format more convenient, while others will find it the other way around.

The height of the gadgets has decreased slightly, as has the weight of the device. These changes can be called minimal.

By the way, the volume buttons for the first time moved to the upper end of the tablet. Perhaps this is done to make it easier to hold the device with one hand.

There are four colors to choose from: space grey, purple, shining star and pink. The last two shared the place of the golden hue.

The display of the old iPad mini 5 is made using Retina technology. This is already a slightly outdated matrix with a resolution of 2048 × 1536 pixels and a density of 326 pixels per inch.

The maximum screen brightness is 500 cd/﻿m². There is support for True Tone and wide color gamut (P3).

The new iPad mini 6, thanks to the reduced frames, received a matrix with a larger diagonal. Now it is a more progressive Liquid Retina display with a diagonal of 8.3″ and a resolution of 2266 × 1488 pixels. The PPI is the same - 326 dpi.

Brightness, unfortunately, has not changed. Peak value 500 cd/﻿m². If you found it difficult to work with the previous device in direct sunlight, you will experience the same problems with the new one.

The aspect ratio has also changed. Now it's 3:2 instead of the usual 4:3 in the iPad line. Other chips like True Tone and wide color gamut (P3) are in place.

There are practically no significant changes in the screen. The matrix has increased in size (the diagonal has grown by 0.4″), otherwise the displays are almost the same.

The old iPad mini 5 runs on the A12 Bionic processor. This 64-bit chip first saw the light in 2018 and was installed on the iPhone XS and XR models.

The device is equipped with a 3 GB RAM module. Buyers could choose between models with different drives: 64 GB or 256 GB. There were modifications with and without LTE.

The filling of the iPad mini 6 was pulled up to a modern level. Moreover, the tablet received the top-end Apple A15 Bionic processor, albeit a little stripped down, but it was presented a few minutes earlier than the new iPhone 13.

There will definitely be enough power for several years to come. The developers claim that the tablet is 40% faster than its predecessor in terms of processor power and works 80% better with graphics.

Volume 4 GB. Available in 64 GB and 256 GB storage models. Considering that tablets are often loaded with multimedia content, the minimum amount of memory will not be enough.

The iPad mini 5 came with a simple 8-megapixel camera that was only good for scanning documents in good light. Aperture ƒ / 2.4 is a vivid confirmation of this. 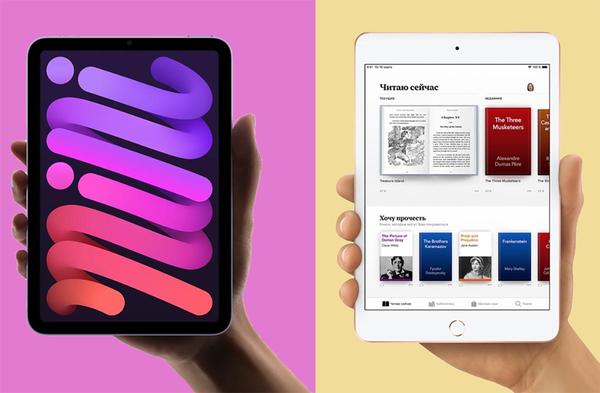 For some reason, the device was equipped with Auto‑HDR technology for photos.

The camera can shoot video in 1080p resolution at up to 30 frames per second. When increasing the frame rate to 120, the resolution had to be reduced to 720p.

The front camera is an even more modest FaceTime HD module. Matrix 7 MP ƒ / 2.2 is hardly suitable for video communication.

The iPad mini 6 has a pretty good camera update. Now it is a 12-megapixel ƒ / 1.8 wide-angle module. There is a True Tone Quad‑LED flash, and Smart HDR 3 technology is provided for photo processing.

It will turn out to shoot videos in resolution up to 4K at 60 frames per second.

The front camera is now also 12-megapixel ƒ / 2.4. The ultra-wide-angle lens allows for 2x zoom out. More features of the matrix are suitable for work chips in the spotlight. This is when the device independently follows the user and tries to keep him in the center of the frame during a video call.

Video can be shot at a maximum resolution of 1080p at 60 frames per second.

Changes in the main camera are unlikely to be useful to anyone, but the improved front camera will definitely please your interlocutors with a clearer picture during video calls.

◉ The new iPad mini 6 has slightly changed the user identification system. The place of the round Touch ID key under the display was taken by a biometric sensor in a button on the top end of the device.

◉ For charging and synchronizing data with a computer, the new minis will use a faster and more promising Type-C port. This made it possible to increase the speed of data transfer over the wire by 10 times and significantly expand the range of supported peripherals.

◉ The iPad mini 6 model with a cellular communication module will receive support for 5G networks.

◉ The new tablet supports the Apple Pencil (2nd generation), while the old iPad mini worked with the first pencil.

◉ Fans of watching videos on a tablet will appreciate the new speaker layout. Now they are spaced apart on different sides to produce stereo sound in a horizontal display orientation.

◉ Please note that the cellular module in the new iPad mini does not support 2G (GSM/EDGE). If you cannot find 3G/4G/5G coverage, then there will be no mobile Internet.

◉ The new iPad mini 6 will come with a powerful 20W power supply. It will come in handy for fast charging your iPhone, but you will have to buy a cable from Type-C to Lightning.

The rest of the parameters remained unchanged.

▣ The case and dimensions have become a little smaller, but the transition to a design with “sharp” edges in such a miniature tablet can be a problem. Not everyone will be comfortable holding the new Mini with one hand or working with it on the go.

▣ The screen has not changed much, although it has become a little larger in size. Although the new tablet received a next-generation Retina matrix, it cannot boast of serious differences from its predecessor. The maximum brightness is at the same average level.

▣ The filling of the new iPad mini 6 is top. It received the latest processor, as in the presented iPhone 13 line, and 1 GB of RAM more than its predecessor. Most likely, the gadget will not be updated again for several years, for this it was equipped with very progressive hardware.

▣ Although the cameras have received improvements, only a few will use them for something other than video communication.

▣ Other highlights include support for the newer Apple Pencil, powerful charger included, 5G connectivity for the cellular model, and Wi‑Fi 6.

There are no other differences between the devices, even the autonomy declared by the Cupertino team is at the same level.

Pre-order will be available from September 22. The start of sales is scheduled for September 24th.

The miniature tablet has received a really major update. The power has been upgraded to the top-end iPhones, the camera is no longer as shameful as it used to be, and the design is stylish and modern.

Only the pricing policy of the Cupertinos is frustrating. "Miniq" by a strange tradition is always sold more expensive than the regular line of iPad. After switching to a frameless design and adding modern communication modules, it looks justified.

However, only 9 thousand rubles more expensive is the full-size iPad Air in the same stylish design and with a large almost 11-inch screen. A compact “under-phone”, given the screen size of the iPhone 13 Pro Max, will be needed by units.

I'm interested in your opinion about the positioning of the updated iPad mini and Apple's pricing policy.

(17 votes, overall rating: 4.47 out of 5)🤓 Want more? Subscribe to our Telegram. ...and don't forget to follow our Facebook and Twitter🍒Bookmark iPhones.ru The update is global, but who needs such a tablet? Tags: Articles,

I love technology and everything connected with it. I believe that the greatest discoveries of mankind are yet to come!