Android 12L update: everything you need to know

Google has finally announced Android 12L, an OS that aims to extend the Android 12 experience to large-screen devices, including foldable devices and tablets. Chromebook users will also benefit from the update.

Until now, Android tablets have simply run a bloated version of the OS on the big screen. Whether it's an 8-inch tablet or a 12-inch tablet, Android hasn't had any optimizations for large screens.

All this should change with the release of Android 12L. Finally, there will be features that allow you to take full advantage of the large display. Here's what to expect from the update.

Android 12L improves the user interface of the system to take advantage of the extra space on your tablet. This makes it easier to use the large screen for tasks such as notifications, quick settings, lock screen, browsing, home screen, and more. In place of the space-consuming notification center, Google is adding a new center dual-pane notifications on foldable devices and tablets. This allows users to see and interact with their notifications while viewing quick settings.

The lock screen will now use a larger two-column layout to highlight notifications and clocks. Other apps, including settings, are also streamlined. Google also makes it easier to interact with its OS on larger screens. For example, the lock screen pattern and PIN controls on tablets are now displayed on the side of the screen for easier access. You can tap on the other side of the screen to move the PIN/pattern controls to that side.

There are also some changes for collapsible items. The company is streamlining the home screen grid and fine-tuning the fold-unfold transition to allow users to seamlessly transition from one outer screen to a larger unfolded screen.

Bigger screens mean more room to multitask, allowing you to be more productive. For years, Android tablets have lacked the productivity features available on the iPad. Android 12L lets you be more productive on foldable devices and tablets with features that make multitasking powerful and intuitive. 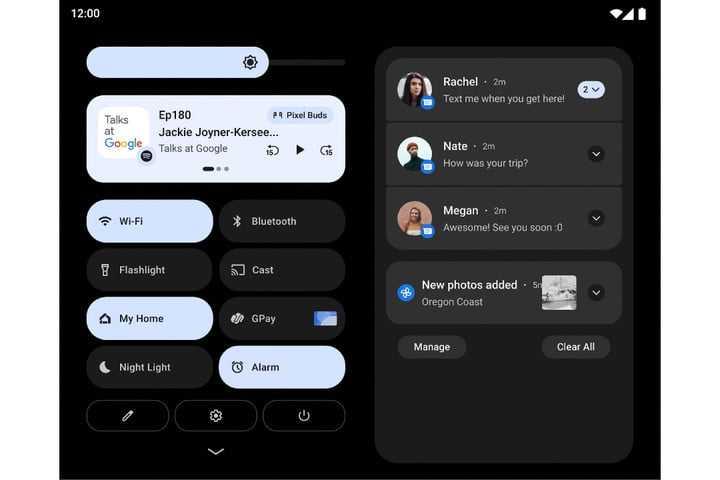 The update borrows the iPadOS taskbar to make things easier. Google is also adding support for taskbar gestures to do things like drag to go to split screen mode and swipe up to go home. You also get a quick switch gesture that lets you swipe through recent apps, and you can hide or show the taskbar at any time with a long press.

With Android 12L, it's now easier than ever to run two apps at the same time on the same screen. You can drag and drop your favorite apps onto the split screen right from the taskbar. If that's not your style, you can use the new Split action in Overview to launch split-screen mode with a tap. Google says it will allow all apps to enter multi-window mode, whether or not they can be resized.

Whatever Google says, Android apps have never been optimized for large screens. Once again, this should change with the addition of multi-window support, screen-size continuity and device position changes, and more, but this presents a unique compatibility issue.

According to Google, it has improved the visualization and stability of its Compatibility Mode to improve the user experience and improve the default appearance of these apps. This will allow device manufacturers to customize the app's aspect ratio, apply rounded corners to the app window, and set the status bar transparency.

Android 12L is currently in developer testing on some devices such as the Lenovo P12 Pro tablet. Google doesn't have its own Android 12L testing hardware at the moment, but the Pixel Fold is rumored to debut before the end of the year. The company is likely , will showcase Android 12L and release a stable update after March 2022 with the launch of the Pixel Fold, just as it released Android 12 along with the Pixel 6 and Pixel 6 Pro.