Why should you fork over half your rent for a great smartphone? Flagships from Apple, Samsung, Google and LG often cost more than $500 unlocked, but the Alcatel Onetouch Idol 3 offers a bright, vivid display; excellent speakers; and a long-lasting battery for just $250. It also helps that the Idol 3 is remarkably slim yet sturdy. Overall, this unlocked phone is a very good deal.

9/23/15 Update: We've updated this review to include more comparisons with other similarly priced unlocked phones.

Sporting a sturdy design that looks like it belongs on a more expensive phone, the Alcatel Idol 3 has an attractive weave finish on the back, and a metallic trim on the edges that adds a premium touch.

A thin, black bezel surrounds the Idol 3's 5.5-inch display. Above it is an 8-megapixel camera. Sitting in the top left corner of the nonremovable back is a 13-MP camera with a flash below.

On the Idol 3's left side is the dual microSIM/microSD card slot and power button, while a volume rocker sits on the right. Up top is a 3.5mm audio jack, while a micro USB port is on the bottom edge.

Alcatel says the Idol 3 has been built with what the company calls Technicolor Color Enhance technology to produce cinematic colors, and the result is a brilliant 5.5-inch, 1920 x 1080 display that's great for your videos, games and Facebook binges. I enjoyed the vivid green grass and blue sky in a 1080p trailer for Ex Machina, as well as the clarity of Oscar Isaac's furry beard. Viewing angles were generous, as image quality remained true even when I tilted the phone beyond 160 degrees from my face.

My jaw dropped when I saw that the Idol 3 measured a whopping 736 nits on our brightness meter. That's almost twice as luminous as the average smartphone (377 nits) and far brighter than the ZenFone 2 (325 nits), the Moto G (463 nits) and the Blu (525 nits). This came in handy when I was out taking photos on a sunny day. After I bumped the Idol 3's display up to 100 percent brightness, I could see what I was shooting much more clearly, and words and graphics on the screen were easily visible.

Reproducing 93.7 percent of the sRGB color spectrum according to our colorimeter, the Idol 3 can display fewer colors than the ZenFone 2 (96 percent), the Blu (104.1 percent), the average smartphone (116.2 percent) and the Moto G (103.3 percent). We like to see numbers closer to 100 percent, if not beyond. 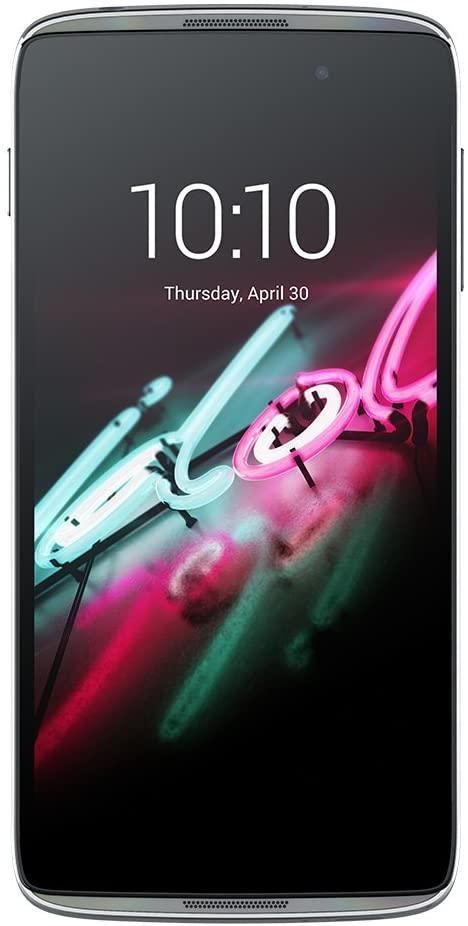 I was pleasantly surprised by the clear quality of music from the Idol 3's front-facing dual JBL speakers. Not only was the audio loud enough to be heard everywhere in my two-room Manhattan apartment, but Hilary Duff's vocals and the whistling introduction in "Sparks" were also distinct and rounded.

You might want to wear oven mitts when performing processor-intensive tasks on the Idol 3. After streaming a Hulu video for 15 minutes, the phone registered a scorching 106.5 degrees Fahrenheit on the front and 103.5 degrees on the underside. Our comfort threshold is 95 degrees.

Running Android Lollipop with some Alcatel customizations, the Idol 3 packs some nifty touches, but the aesthetics of the skin isn't for everyone. Touted as the first reversible smartphone, the Idol 3 can flip its OS upside down to be used regardless of how you're holding it. Although other Android devices — such as the Galaxy S6 Edge — can also turn their displays upside down, they have physical home buttons that make the devices less convenient to use that way.

MORE: Android 5 Lollipop: A Guide to the Best New Features

Since it doesn't have a physical home button, the Idol 3 can be picked up from your purse and unlocked every which way. Just make sure to enable the double-tap gesture to wake the phone from sleep, or you'll still have to hunt for the power button to unlock your phone.Alcatel has replaced some of the apps — such as Calendar, Contacts, Weather, Browser and Contacts — with its own, and included some helpful programs, such as Wi-Fi Transfer, Wi-Fi Display (for sharing your phone's content on other screens) and File Manager. You'll also get the fun Mix app for making mashups with your music, à la Anna Kendrick in "Pitch Perfect."

The cute, rounded custom app icons may turn Android purists off, but there are some features we like. Some apps, such as Mix and Weather, open within floating windows rather than taking over the whole screen. Alcatel also added a setting that, when enabled, lets you quickly open apps and notifications from the lock screen by double-tapping each icon or alert.

The Idol 3 comes with an Eye-D tool that lets you unlock your phone by scanning your eyes with the front camera to detect the white space on your eyeballs for identification. It's handy for when your hands are full, but takes too long (2 to 3 seconds) to verify your identity.

With an octa-core (1.5-GHz quad-core and 1-GHz quad-core) Snapdragon 615 CPU and 2GB of RAM, the Idol 3 can handle most of your multitasking needs with ease. I had no trouble firing several shots in rapid succession in the Camera app, while the Browser and an installation for The Sims FreePlay ran in the background.

Although I enjoyed playing casual games such as The Sims FreePlay and Candy Crush Saga on the Idol 3, it isn't a smartphone on which you'd play graphics-intensive games. I noticed that the phone lagged a bit while rendering the 3D visuals in Goat Simulator.

Your Facebook and Instagram followers will be charmed by the photos you shoot with the Idol 3. The smartphone's 13-megapixel f/2.0 camera took beautifully vibrant and sharp pictures of springtime blossoms in Madison Square Park.Yellow, orange and purple flowers were accurately rendered, although white tulips were blown out due to the harsh sunlight. Similar pictures captured with the LG G4 and iPhone 6 Plus showed almost the same level of overexposure, though.

The Idol 3's camera faltered in low light. My shots of the Manhattan cityscape at night were grainy and muddy.

A shot of chocolates in City Bakery's dimly lit showcase had a similar splotchy quality, although it was clear enough to see the detailed texture of the wall and patterns on the orange packaging.

The phone's flash was powerful but not overwhelming, lighting up a portrait (shot by my co-worker) while keeping my skin tone accurate.

My 1080p footage of adorable dogs at Madison Square Park was smooth, bright and colorful, with the excited canines remaining clear as they ran around the enclosure.

Up front, the 8-megapixel cam snapped vibrant, sharp selfies that showed off the beautiful pink flowers as well as the freckles on my nose.

Alcatel's camera app replaces the stock Android one, offering such options as a QR code scanner, Time Lapse, and Manual and Face Beauty modes, in addition to the standard HDR, Panorama and Auto modes.MORE: 10 Smartphones with the Longest Battery LifeI liked that the app offers Manual mode for photographers to control settings such as ISO light sensitivity, shutter speed, white balance and focus level. Focus lets you adjust how far away your focal point is on a scale of 0 to 100.The Face Beauty mode works with both the front and rear cameras, meaning you can beautify not just yourself but your subjects as well. In this mode, you can drag two sliders to adjust your skin tone (how fair you look) and smoothness. This tool worked pretty well, making my skin look nearly perfect without being too fake.

The Idol 3's 2,910-mAh battery should last you through the workday. The handset clocked 9 hours and 16 minutes on our battery test, which involves Web surfing at 150 nits (which is just 9 percent of the Idol 3's capacity) over AT&T's 4G LTE network.

The Alcatel Onetouch Idol 3 is one of the best smartphone deals yet. For just $250, you get a very bright display, superb speakers and an all-day battery in a sexy frame. The front and back cameras also performed well, though you'll definitely want to use the flash in low light.

Among midrange unlocked phones, the Asus Zenfone 2 delivers faster performance for about $50 more, and the latest Moto G has a customizable design and better camera starting at just $180, but its performance is weaker than the Alcatel. Overall, the Onetouch Idol 3 is a great value.