I can't help but imagine the design meeting at Toshiba HQ when the Satellite designs were finalized. I picture a heated debated ending in a stalemate between two totally different ideas, and with no resolution the company simply pursued both options. I can't think of any other way to explain that two ultrabooks called the U845 and the U845W would look so drastically different.

The U845 is clean and cohesive, with a brushed-metal silver aluminum lid and matching interior, plus a glossy black bezel around the screen. The bottom is a matte silver, with vents placed seemingly randomly around its surface; there's a matte silver stripe at the top of the lid as well. The U845 is sturdy and well-made, handsome without being particularly eye-catching. It's 0.78 inches thick, which is meatier than most ultrabooks, but since its edges taper sharply toward the bottom, it looks thinner than it is. At 3.9 pounds it's also fairly heavy for an ultrabook, but it'll definitely fit into your bag without racking up your medical bills.

The U845 is somewhat monochrome and innocuous in its design, but for better or worse the same doesn't apply to the U845W. In terms of dimensions, it falls in a unique category: it's as wide (nearly 15 inches) as a 15-inch laptop like the Vizio Thin and Light, but as tall as an 11-inch laptop. It features a distinct two-tone color scheme, with a rubberized gray strip occupying a third of both lid and palm rest plus the whole bottom of the device, and a brushed-metal gray / silver covering the rest. Large speaker grilles flank the U845W's keyboard, whereas the speakers fire downward out of the bottom of the U845. The U845W is ever so slightly thicker and heavier, at 0.81 inches and 4.0 pounds, but I can't say I noticed the difference between the two. 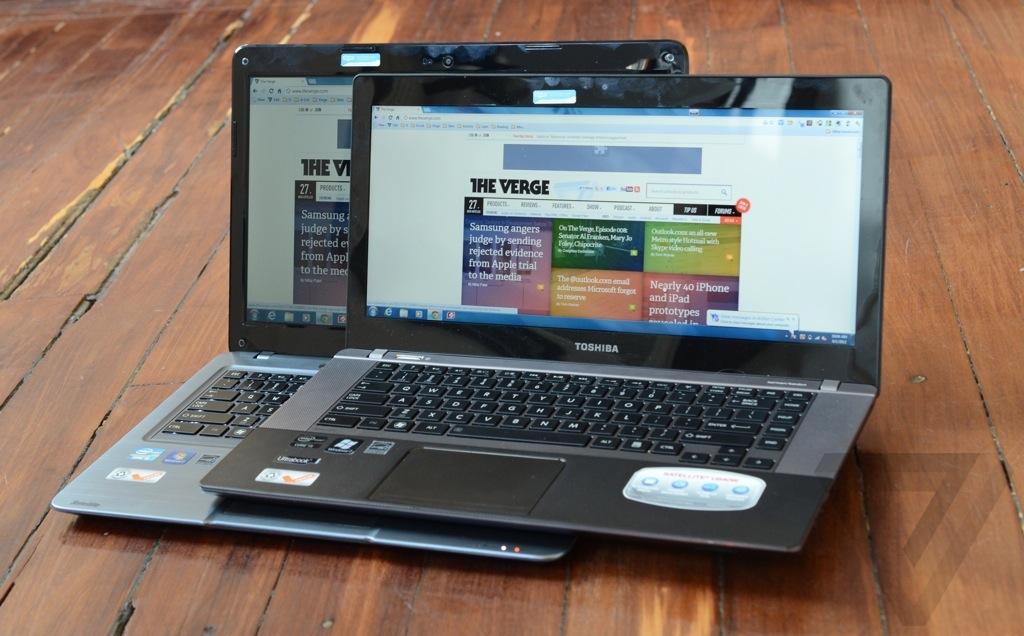 The port selection is roughly the same on both models, though the layout is different. Each has three USB ports lining the sides — one is USB 3.0 on the U845, and all three of the U845W's ports are 3.0. You'll also find 3.5mm headphone and microphone ports, a full-size Ethernet port, an SD slot, and an HDMI out on both computers.

There's one design touch that I hate equally on both models: there are stickers everywhere. The palm rest's six stickers are garish themselves, but they're not even the whole story; there's a big Skype sticker above the screen that I couldn't stop unintentionally looking at, plus four more on the bottom of the device. I was able to peel them all off — and the Satellite laptops became infinitely more attractive once I did — but it required a solid 25 minutes of digging my nails underneath adhesives that don't want to be removed.

This Android Phone Reinvents The T-Mobile Sidekick For 2019