About a year ago, a multimedia docking station Samsung Dex appeared, it turned the Galaxy S8/S8+, and later NOTE8, into a full-fledged computer.All that was needed is to add a monitor or TV, connect a mouse and a keyboard to get a replacement for a regular PC.Connect DEX with a monitor by HDMI cable, and voila, everything begins to work without some complex settings.It’s simply, of course, and to some extent this is the concept of the workplace, where the smartphone, which is always with us, becomes the central part.

With the advent of the Galaxy S9/S9+, the docking station has also been updated, it was called DEX PAD.Now the location of the smartphone in the station is different, it lies, and the screen can act as a mouse.Perhaps this is the main difference that is striking.It is nice to note that the new station has become more compact.

Compare the old docking station and new, the differences are clearly visible, but at first glance they do not play a big role.

In fact, everything is more interesting, since with the new Dex Pad, the need to carry a mouse with you. I had a little space in my backpack, now Dex Pad, HDMI cable and a portable keyboard live there. This set takes up less space than the laptop and its charger, I prefer to take it with me on short trips. For most hotels where I stop, there are TVs with an HDMI output, that is, it is not difficult to bring the picture on the screen. Rather, the problem is that sometimes the TVs are placed on the wall, and the table is somewhere on the side, then you have to work on the bed. But this is only one of the scenarios that is not the main one for me.

The main scenario for using the DEX station for me was the creation of a workplace where I periodically visit, for example, in the country or second apartment, in offices where I work from time to time. Previously, the organization of the workplace in such places would be extremely simple and uncomplicated, a PC or laptops are everywhere, in some way they are synchronized, for example, through a cloud. It is expensive and pointless, since a lot of money is spent on what you use from time to time. My inner toad was very worried about it, and therefore had to carry a laptop with me. There was another problem, sometimes I didn’t take a laptop with him, and he was needed at the most inopportune moment. And there were no longer any options, except to go home urgently in order to work, although they themselves took a little time.

When Samsung Dex appeared, I began to look closely at how it works and how much it closes my needs. I tried on for a long time and searched for weaknesses to say that this decision was not suitable for me with a pure soul, and to drag a laptop in the old fashioned way. But it turned out exactly the opposite, and now the DEX stations are with me everywhere, and for some locations I bought monitors and keyboards to get full-fledged jobs. Now, coming with my smartphone, I have no difficulty in starting or continuing to work, I have everything at hand, and the “inclusion” of DEX takes a matter of seconds.

Before I describe my work scenarios, I want to dwell on important points. You can connect any periphery to DEX, whether it be a mouse or keyboard (wired or wireless, choice for you), as well as hard drives, information accumulators or an eternet connection. If you are not going to ride and carry DEX with you, equip a stationary workplace, then you should choose a full -sized keyboard. Those who travel by car will be easier to work on large keyboards. But for flights it is worth dwelling on compact options, they take up less space.

With the mouse replaced by Dex Pad, everything is not so simple.Perhaps you will not need it in most applications, but if you plan to play (what if?), Then an ordinary mouse will be more convenient.DEX PAD is quite suitable for working in applications, only you need to remember that on the screen after that there will be traces of hand, however, this happens when you work with a smartphone.Let's look at my scenarios for working with DEX to understand why this decision was successful for me.

Scenarios for working with the DOX/DEX PAD docking station

My working day on the computer takes place in several programs. This is a text editor, browser, electric tables and mail. Sometimes there is a need for additional programs, but this is rather an exception than the rule. All postal accounts are configured on my smartphones, all investments in the mail are supported, so on the road I can always work on them, there are no difficulties. The functionality of postal applications on Galaxy smartphones is different, there are no complaints here. But to write big letters from the smartphone or even to dictate them is not very convenient, after all, it is a compact device. Therefore, when I am in the city, my answers to the mail are either very short, monosyllables, or I put off detailed answers until I get to the computer.

As I already wrote above, in some locations where I constantly live, installed DEX and use it, it completely replaces the computer to me.I have no complaints about working with mail on the device.The same thing with a browser, viewing social networks, and the latter are opened through applications, and multitasking, switching between windows is supported. 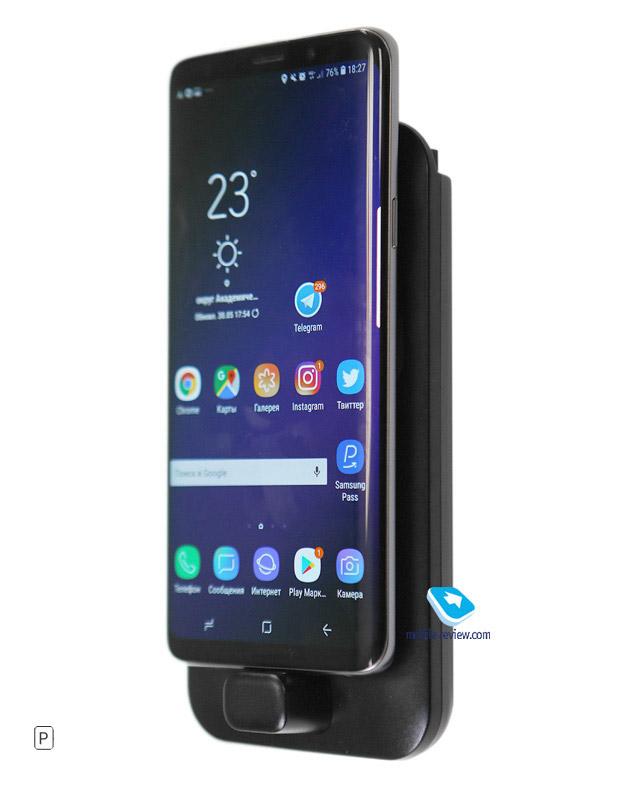 On the computer, I practically do not look at the same Instagram, it’s inconvenient for me to do it in a browser, this application is on my smartphone.And then it looks organic.When I work at the DEX stations, I have Twitter, Instagram, Facebook Messenger and a number of other applications, they are constantly hanging in my memory, and I can switch between them.

This is very convenient, since in any case I spend most of the time with my smartphone and use applications on it, I do not use them on the computer.And then DEX gives me the opportunity to live with the same applications, in the same rhythm.It is very good.

However, not all electric tables in applications can be processed correctly on a smartphone, especially if you have complex macros and the tables themselves are dentist. For all the time I met only a few such files, the smartphone can easily cope with the rest. This is a lack of software from Microsoft, which is not omnivorous and lost on complex files. By the way, Microsoft specially finalized the office package for working with DEX, that is, this is not the same program that lives in your smartphone, it can use the advantages of the connected screen, correctly formates data.

It is not necessary to use MS Office or other programs from the Microsoft package, all office programs that you can find on Android work perfectly in DEX mode.Accordingly, it does not matter which of them to type texts is your choice.

And you can also listen to music (speaker in the station, the sound is quite decent for such a size), watch a video on the big screen.

And all this in an ordinary, multitasking environment, which maximally resembles the MS Windows environment.And, just like in an adult OS, you have the opportunity to set up your desktop, put your wallpaper, choose icons that will be before your eyes.

In the new version of DEX PAD there was a larger number of games, but this is already additional, optional functionality.As for me, it’s easier to pick up the phone and play it on it than to do it on a large screen without sensory input.Still, games were created under the screens of smartphones and fingers control.Although it was for DEX that some developers optimized their toys.

In the dry balance I want to note that a smartphone acting as the center of the workspace does not look exotic for a long time.It is also important for me that it is also that you do not need to leave your computer somewhere, the safety of such a solution is several times higher, since you always take the smartphone with you.And even taking it out of DEX, you will not interrupt the work you have begun, it will simply freeze in the state in which you left it.

The price of the issue.Is it worth it or not?

First you need to understand how you need the scenari described above.If you have a computer at work, there is also a working machine at home, then probably DEX is excessed for you, you just have nowhere to put it.This is an additional workplace that is perfect where you are not constantly, and you do not want to put a computer or not.Of course, you can use DEX and at home, replace it with a completely home computer, especially if you do not play games.

The price of such a workplace is minimal. You need to buy a DEX station (5,490 rubles for a regular DEX or 6,990 rubles per DEX PAD) and a monitor. The cost of monitors at 22-24 inches with an HDMI output is small, you can purchase them for 6-8 thousand rubles. In total, the full set for work will cost you from 12 thousand rubles. Of course, for this money you can buy a simple laptop, but it will have less a screen, worse the keyboard, as well as mediocre performance. In the case of the DEX station, everything is exactly the opposite, although the lack of Windows programs for someone will become a serious minus, for example, it will not be possible to work in 1C. But for their scenarios, this is a unique offer, there is nothing like that on the market today, there is nothing with which you can compare the DEX station.

If you need compactness and you do not want to mess with the mouse, then pay attention to Dex Pad.If you want to save a little, then purchase the previous generation of the DEX station.It is interesting that those who began to use DEX last year, as a rule, are satisfied.It is important to understand why you need this station and what your scenarios it corresponds to.With a conscious approach to the choice of such a docking station, you will certainly like it.

Links on the topic

Samsung Smart Switch is an easy way to save time and nerves, as well as your data

We are in social networks: