Not all of them, though. The Samsung Gear S2 3G is a smartwatch that has its own cell service. It can work without any phone at all. I wore the Gear S2 3G for a few weeks. And, now I've taken it off. It's an amazing little demonstration that a watch can be its own phone...but I can't see enough reasons for most people to buy this.

I took the watch off its charger and slipped it on my wrist. No phone in my pocket. With this watch, you don't need a phone: it's got a little e-SIM inside. The Gear S2 3G makes phone calls. It also gets messages, texts and checks the weather while using a 3G network or Wi-Fi to connect.

It's a nice-looking watch: it looks almost exactly the same as the slick Gear S2 I loved last year. And it's basically the same smartwatch...with extras. You're getting a bonus speakerphone element (which, like an Apple Watch or older Samsung Gear watches, also works when paired to your phone) along with built-in GPS. But it's also really thick. It felt OK on my wrist, but anyone who prefers smaller watches or bands might object.

Even though it will make calls on its own, this watch first needs to pair with a Samsung or Android phone to get started (iPhone support is said to be coming later in 2016, but Samsung hasn't confirmed whether that will include support for the 3G version's speakerphone calls). Once it's set up with a data plan from an AT&T, T-Mobile or Verizon account, you can turn that other phone off and just use this watch. The AT&T version can share your phone's number via NumberSync, while the Verizon and T-Mobile versions get a separate phone number that can get forwarded calls; each will also end up costing about $5 extra per month on your wireless bill in the US in order to share data on a plan that allows it. I tested an AT&T version.

My wife could hear my calls just fine outside: the microphone's great. But the speaker sounds weak. You can pair a Bluetooth headset and use that instead. Pairing a Bluetooth headset also means you can use the watch to store music or even stream music, turning it into a little self-contained wrist entertainment system.

It connects to messages, apps and navigation

Again, Samsung's Gear S2 watches run Tizen, a separate operating system with a separate app store from smartwatches on the Android Wear platform. There's nothing really wrong with that, but it does mean that the Gear S2's on its own app island, with fewer choices of what to install. And it also means that for some features like navigation or email, you have to make sure you install or set up the Samsung Gear-ready apps and conduits that work with it (unlike Android Wear or Apple Watch, which knits into phones a little more seamlessly). 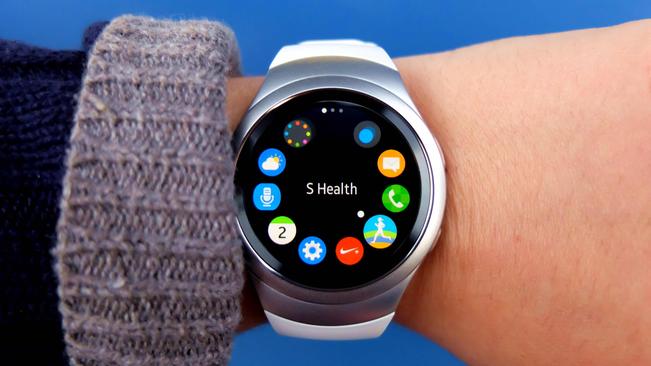 I was able to check messages, look at news, check the weather, find restaurants with Yelp, navigate on my wrist and get directions, while even using the on-board GPS to track and map runs as well as walks with Samsung's S-Health fitness app.

I can't say I did all these things frequently, though. I don't power-use watch apps, mainly using my smartwatch for basic information. To access more, then I go to my phone. See, that's the thing: I always have my phone on me. Why would I ever leave home without it? There's no way I'd rely on my watch as a phone.

And, that, ultimately, is the problem with the Gear S2 -- and maybe the whole idea of a standalone "watch phone."

Samsung's wrist-based version of Samsung Pay is coming to all Samsung Gear S2 watches - even the non-3G ones -- later this year, but it'll only work when paired with a Samsung phone.

I've been down this road before

There was another stand-alone 3G-enabled Samsung watch: the Samsung Gear S. It didn't make much of an impression on me. Its apps were weird, and it was hard to use.

Samsung's much better Gear S2 -- the original Wi-Fi and Bluetooth model that was released in late 2015 -- doesn't make stand-alone phone calls, and doesn't even have a speaker for Bluetooth speakerphone calls like older Gear watches did. But the S2 3G version does. And that might matter to some people.

I remember a pizza delivery guy in my town who wore a Samsung Gear 2 years ago and told me how much he loved it for hands-free calling. I met a TSA agent at the airport once with a Gear 2 who said the same thing. Samsung's watches used to have speakerphone functions built-in, but their new Gear S2 watch ditches it. It's more like Google's Android Wear watches: a microphone for voice commands and dictation, but silent otherwise. However, this 3G version of the S2 restores that speakerphone function.

The speaker can also be used for other things: feedback sounds, voice from Samsung's S-Voice searching and even Milk music streaming directly on the watch. Yeah, it's ridiculous...but I had some fun streaming music on my wrist while playing with my kids. And it also caused the Gear S2 watch to overheat a few times, weirdly enough. This led to getting a "please wait" message, letting me know the watch was in cooling-down mode. Not cool at all.

It's not that easy to set up the Gear S2 3G. I paired it with a Samsung Galaxy S6 Edge+, both review units loaned to me by Samsung. I also needed to make sure the AT&T account I was using was sharing the same phone number (AT&T allows number syncing with other devices), and on this watch it means you could make a call and someone would see your phone number. But on Verizon versions of the watch (yes, you need to pick your version), call forwarding is enabled for incoming calls while the watch itself has a separate phone number.

But even when you've paired the watch to the Samsung Gear Manager app on your phone and you think everything's working, individual apps still need to be pre-initiated. I had to download Milk Music and a weird Milk Music conduit app before the watch would stream music on its own. Same for ESPN's watch app. Email required setting up my account on Samsung's own email app, even though I was already logged into Google on my phone.

Pricing is weird, too. It costs anywhere from $200 to $350 on Verizon and AT&T's store pages, for versions "off contract" and on a "2-year contract." You'd also want to pair this to your own phone with AT&T or Verizon and share the data plan, which will cost at least $5 a month. Basically, it's not cheap.

The Gear S2 3G isn't clearly advertised, either. Places that sell it just call it the "Samsung Gear S2." But it's a very different product, with a different use case. Most people I've spoken to don't even seem to understand that it exists.

I didn't mention battery life, but it's not great. It has about three or fours of active use, or a day (or less) of regular standby use with cellular turned on. It ran out of juice on my wrist by early evening, most days, and I wasn't using it much. It charges via a wireless cradle that's included.

There's something else that's missing: a connected world. The watch connects to the Internet, but not to things immediately around me.

This is a problem with smartwatches in general: they seem blindered to what's immediately around me, but hooked into distant things online. It feels more underlined with a stand-alone smartwatch. It only makes sense, since we're still not close enough to having a truly smart connected world that's ready to interface with our watches yet. But getting my tickets, smart home controls or local transit information quickly and easily is what I'd be after more than headlines from CNN.

Fully stand-alone smartwatches are getting better, but they're still not smart enough for me yet. There was a time when I wanted my watch to do everything. Now, I realize I'm okay with it not doing some things.

I don't need the cell service

I wish the regular Samsung Gear S2 had the speakerphone functions that the 3G version keeps all to itself.

I like having speakerphone functions on a watch, it actually comes in handy. But I just want it for calls connected to my phone. I don't want to be forced to upgrade to this 3G version, with its higher price and odd mobile data plan activations.

But I realize there might be people that love having a watch that's a phone in easy reach on their wrist. It could be a watch for emergencies, or for those who can't get up and move easily. It could be convenient for a jogger, or someone who wants to run without their phone but doesn't want to feel disconnected.

That person isn't me. Yet.