For six months now, as I switched to Android with the iPhone.I use Google Pixel 4a, and this smartphone still pleases me.But there is one point that I have not yet been able to find a solution - this is a smart watch.

Wearable gadgets have been my life companions for about five years.Without them, like without hands.And if I used exclusively Apple Watch before the transition to Android, then I could no longer continue their use with Google Pixel, because they work only with the iPhone.

In May, I bought Samsung Galaxy Watch Active 2, sold in July, and now I clearly understand that Apple Watch is perfect smart hours.

I will immediately answer the question: why Galaxy Watch Active 2?

Smart watches for me are the main way to pay.

I bought this watch because there was nothing more worthy for Android in the Russian market.I do not perceive all sorts of crafts from Hauwei and Xiaomi.

Really good hours on Wear OS in general on the fingers to count and order them should also be from abroad.I hope Galaxy Watch4 will somehow save the situation, but for now about the painful.

1. Siri may not be perfect, but for Apple Watch it is enough

Siri functionality for smart watches is more than enough.

I do not belong to the category of people that are used by smart watches as an ordinary clock.This is a gadget from which I try to squeeze the maximum.On Apple Watch, I very often interacted with Siri: I created reminders, events in the calendar, put an alarms, called, wrote messages, and so on.

There is no voice assistant on Galaxy Watch.At least in Russia.Bixby is available to all other markets - this is a branded voice assistant Samsung, which so far works only in English and several more languages.

And the main charm of Siri was integration not only with Apple services, but also by other applications.And thanks to the syloud synchronization, for example, the created reminder from the watch appeared on all my technique (iPhone, iPad and MacBook).This story worked seamlessly and without fail.

2. There are many applications on Apple Watch

The main advantage of apple watches.

Those who used apple smart watches will understand me how conveniently Apple implemented the process of parallel application loading on the iPhone and Apple Watch.That is, I take and download Telegram, and his client is parallel on the watch.

It turns out that I do not need to wander around the nooks of the App Store to download something separately for Apple Watch.But this is another half a row!The functionality delights me much more - almost all the software on Apple Watch - these are not cut customers, but full -fledged applications.

If you take the same Telegram as an example, then with it I can answer my interlocutors directly from the clock, both dictating messages and recording voice.You can even send stickers and emoji!Well, what is not a charm?

Synchronization works only with an active subscription to the application.

Even on Apple Watch I used Bear (free) - this is an application for notes.Right from the clock, I could voice new notes, and then read or edit them from any other equipment (iPhone, iPad, Mac).

And you would have known my disappointment when I realized that there is nothing similar to Galaxy Watch Active 2.

Galaxy Store is terrible.There are no normal applications there, everyone was flooded with some kind of curved crafts and nightmarish dials.From the really suitable I found only Spotify.I don’t even know what else to add to this.

3. The square screen in smart watches of the best round

A matter of taste. 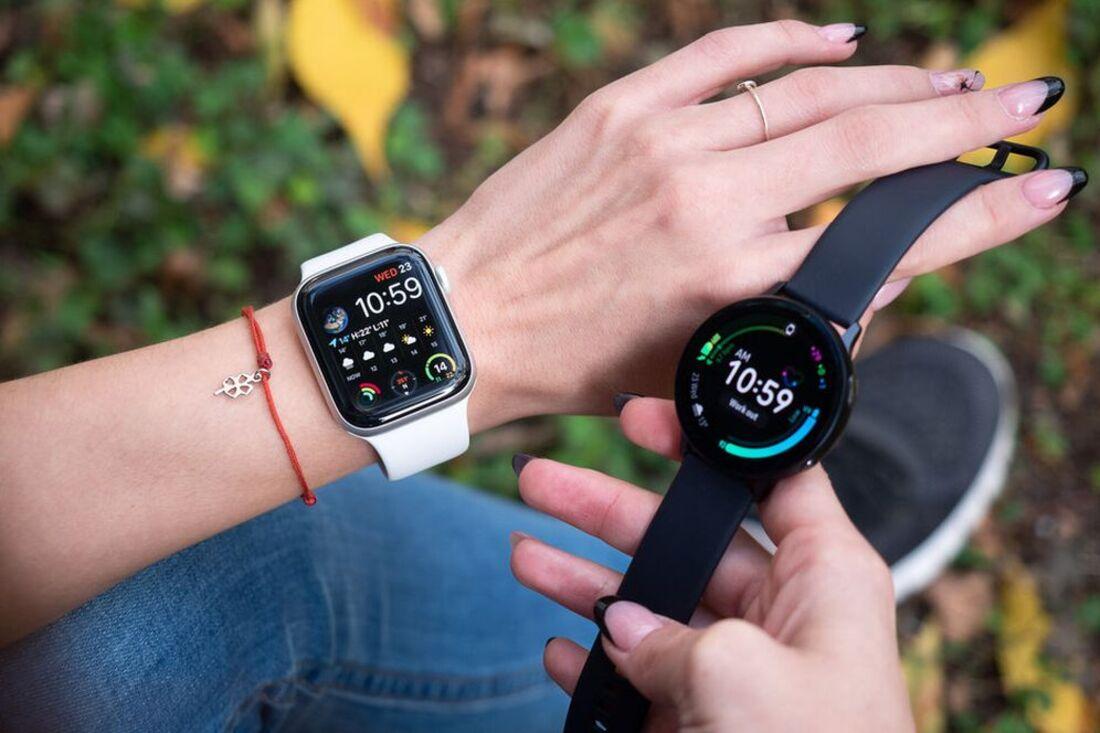 I have one friend who loves Galaxy Watch for a round screen, because smart watches look like a classic watch with him.I do not share his opinion.

Smart watches are primarily a gadget.It is not without reason that of smartphones, tablets and laptops of the displays have a rectangular or square shape.Because it is more convenient to interact with content, and this applies to smart hours.

Apple Watch contains more information, it does not cut, and they look still presentable with any clothing.

Meanwhile, the round screen in Galaxy Watch makes only worse.Because of it, dials cannot accommodate as much information as the dials of Apple Watch can.But this is worthy of a separate item.

I have never used third parties.Standard enough for the eyes.

Someone scolds Apple Watch for the lack of third-party dials.Galaxy Watch has them, but the clock does not become better from this.Samsung does not have strict rules on this subject, so the Galaxy Store has a lot of dials that need to be sent to the basket.

Almost all of them look rudely "collective farm".The developers sculpt the fonts, which ones hit, make their shape of shooters, badges, and in the end all this is knocked out of the general style of One UI.

In Apple Watch, let there be only standard dials, but they can be very thinly configured and made a unique combination.Moreover, I speak not only about color, but also about the styles of hours and expansion from third -party applications.Galaxy Watch can only dream of such owners.

Apple Watch is all right with this.

The main element of smart watches is the dial.In Apple Watch, they are perfect due to extensions from third -party applications.You can even put the last posts from the news aggregator or Twitter.Well, or place quick access to e -mail.There are many use options, and not a single one on Galaxy Watch.

Dials are literally dials - many of them show only time and date.If desired, you can bring some fitness data, and then not to any checkpoint, but only to standard ones.

I don’t know what Galaxy Watch4 will have there, I hope that Wear OS will somehow solve this problem, but so far the impressions are not the best.

6. Tizen is not even next to Watchos

For smart watches, this is an extremely weak platform.

The situation comes out as with Android in the early 2010s.Watchos is a stylish, fast system with beautiful animations and a single design in applications.Tizen cannot boast of this.

Animations, even when scrolling through the menu, are inhibited.Given that I had a flagship watch Samsung in my arms at that time, seeing this in the system is not permissible.

Applications are loaded up long, as if I picked up some very weak smartphone with poor optimization.

7. To configure Galaxy Watch, you need to install a ton of applications

I love Apple for simplicity.

I immediately note that this does not apply to Samsung smartphones.There are all the necessary plugins from the box, but do not expect the same simplicity on other Android smartphones.In addition to the Galaxy Wearable, I needed to download at least three plugs on my Google Pixel and another client for Samsung Pay.

Yes, you can’t just configure the payment from the clock.The Apple Watch with the iPhone was not enough that spectacity and ease of settings.

Still, Apple came up with a brilliant solution-you bring the clock to the smartphone, a window on it appears on it, you lead a camera, and after 10 minutes Apple Watch are already ready “for battle”.

I hope that Watch4 will not fail.

In August, Samsung held a presentation at which she showed the new Galaxy Watch4 line with Wear OS.I will definitely buy this watch as soon as they appear on sale, and I really hope that the situation will change for the better.

In one of the Samsung branded stores, I “felt” this watch, and I can say that the interface began to work quickly (almost like Apple Watch), the location of the elements became more convenient and the impressions were generally positive.

Let's see if everything will be well with them in a couple of months.Hope so.

The chief fan of technology and star warrior in the Galaxy.I am still listening to music with iPod. There is a question or comment: [email protected]