With the launch of Call of Cuty:Warzone‘s fifth season, players are now able to enjoy many new features, including entry into a mysterious set of rooms inside the newly opened Stadium. These rooms are unlocked by collecting hidden access cards throughout the Stadium, but as with many Easter eggs and secrets, finding the cards and unlocking each room isn’t straightforward — and can be tricky to figure out.

Not to worry, as that’s where we come in. This guide will show you where to find all three access cards (EL-2, P2-16, and CL-19), the locations of their corresponding rooms, what the hidden rooms contain, and tips for getting inside as easily as possible.

The main thing to know about season five’s new access cards is that all three of them spawn randomly — and not in the same location each time. This makes things a bit more difficult since you’ll have to go on somewhat of a scavenger hunt to find them. You’ll probably have some difficulties since the Stadium is now open and a lot of players will land here. With that in mind, you’ll want to make sure you land in such a way that doesn’t get you killed right off the bat. We recommend landing outside the Stadium to use one of the lower-traffic paths for easy entrance. The garage entrance on the southern side is usually a safe bet, but you can enter wherever you’re comfortable. We just advise against landing in the center, since that’s where most people land.

There were many reports online that stated each card would spawn on the same floor as its door, but from our play sessions, that didn’t seem to be true. You’ll notice in the image above, the CL-19 card was spotted in the garage — while its door is on the floor above that. In short, you’ll need to make your way throughout the Stadium’s floors in search of the access cards. That’s why we highly suggest going to the Stadium with a team. That way, you can all split up to look for cards and try to keep the building locked down.

Another important thing to note is that the cards will despawn after a while if they aren’t collected. For instance, we were standing right next to a card but never picked it up. After a few minutes, it disappeared. It’s unclear if it respawns elsewhere or if it’s gone for good. Either way, grab one if you see it. They can be found out on their own and are depicted as glowing cards on the ground. It’s also worth noting that once the game ends, you’ll need to find the access cards again. They don’t carry over from game to game.

We’ve seen reports online that they spawn in crates as well — but again, we weren’t able to replicate this. We had a lot of luck finding cards in the garage area. In fact, all three cards spawned here for us, even cards that did not correspond to this floor. Look behind staircases and near higher-traffic areas, sometimes close to crates. You can also grab a card from a dead enemy, but remember to collect it quickly so it doesn’t disappear. 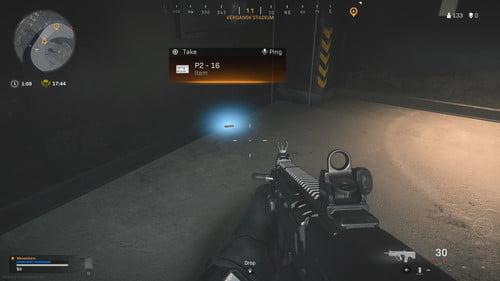 If you’ve scoured the Stadium without being able to find a card, it’s recommended to start a new match. We didn’t have any luck getting the cards to respawn in any way. However, before you restart, it’s definitely a good idea to explore the Stadium, so you can find your way around it easily. Especially take note of the staircases and their locations. This will help you get around while you work on finding each card. There are only a handful of staircases in the entire Stadium, along with an elevator shaft you can use to rappel. Once you feel comfortable with the Stadium’s layout, you can start identifying the three hidden rooms, which we’ll detail below.

As mentioned before, there are three access cards that each open a locked door, meaning there are three doors to find. They don’t need to be unlocked in a specific order. One of them can be found on the Stadium’s main floor, by the bar area on the western side. The main floor is in the middle, between the garage and the top floor. This section will likely be busy, as players tend to run over here to take cover from the chaos that goes on in the center. To get here, we suggest landing on the outside of the Stadium’s western section and going through one of the doors. Be sure to grab a weapon as soon as you can after you enter.

If you’ve located the CL-19 access card in the garage area, there are plenty of ways to get up to this floor. Take a moment to gauge how busy the Stadium is and either make a beeline for the closest set of stairs or head outside so you can enter through a door on the main floor.

The room unlocked by the EL-21 card is found on the top floor of the Stadium on the southern side. You can get here a few different ways — the easiest being a set of stairs located in the garage that will take you all the way up. You can also get here by rappelling up the elevator shaft, or by gliding in through a broken window. Either way, be cautious here, because it’s very easy to get taken out while trying to find the door. The circular setup of the Stadium makes it tougher to stay hidden from the enemies, but we did notice this is typically a lesser-visited floor.

Finally, the room opened by the P2-16 card is found on the bottom floor of the garage. There’s a bus near the two ramps that lead down to the second level of the garage and you can find it on the northeastern side of the Stadium. Head down one of the ramps and you’ll locate the room on the northern side. We had a lot of luck finding this room’s card for some reason. Be sure to open all the nearby crates to try to find the P2-16 card.

So what’s the purpose of opening these locked doors? Well, for one thing, they contain lots of good loot. Though, after all is said and done, we don’t necessarily recommend going out of your way to find the access cards if all you’re looking for is loot. If you happen to stumble across one of the cards, then sure, head to its corresponding room to get some goodies. But otherwise, it’s more trouble than it’s worth because it’s so easy to get taken out at the Stadium.

The real reason to open these doors is for the mystery that lies inside them. All three rooms contain a computer that will spit out a series of numbers and strange symbols at you. This is a code that you need to decipher to access a locked room on the top floor, which will require you to type in a series of numbers to get in. On the top floor, near the western side, you’ll find a set of double doors with a keypad next to it. There are actually two sets of doors — both of which lead to the same room. This is a different door than the one that’s unlocked using the EL-21 card.

How to decipher the code to get into the locked door

To decipher the code, you’ll need to look at the numbers and symbols given to you on the computer screen inside the three rooms listed above. In the video above, the code is HN6H70NN. The symbols represent a house (H), a nose (N), and a Chinese character (C). To figure out the numbers associated with each letter, you’ll need to open all of the rooms. The actual code is the same across all three rooms but will feature different symbols throughout each, which are used to help you decipher the code in its entirety.

For example, if one room gives you the code HN6H70NN (as shown in the video), and another one gives you 1N61C0NN, you can infer that H=1 and C=7. Now, you have a more complete version of the code that reads 1N6170NN. You’ll have to visit the last room to uncover what N stands for in this example. In essence, finding all three rooms and comparing the partial codes will give you the full number needed to enter the room on the top floor. We recommend you use a team of at least three people to explore the Stadium to find each access card to enter the three rooms.

Once you do find all three access cards (which is easier said than done), your team can enter each room, grab the code given to you by the computer, communicate it to the team, and decipher it to get inside the top room. Keep in mind, the codes will be different every time you play, as are the values represented by each symbol. So you’ll need to use the access cards to unlock the three rooms each game in order to get in and find the partial codes.

It’s worth noting that you can find two out of three rooms and their partial codes and simply use trial and error to figure out what the last symbol represents. For instance, if we use the code given above of 1N6170NN, you can type in the numbers you do know into the keypad on the top floor, and keep trying a different number for what N could be. Eventually, you’ll get it and it might be better to do this than to try and open the last door with a keycard. If you’re going to use this method, try and utilize the numbers you haven’t used yet, like 2, 3, 4, 5, 8, or 9 (in correlation to 1N6170NN).

Once inside the room on the top floor, you’ll find some items and a blueprint for the Enigma assault rifle, along with loot and strange maps plastered all over the walls. There’s also a Loadout Drop inside, which you can throw anywhere to spawn your custom loadouts. Many players believe this room is tied to a larger Easter egg, but at this time, it’s unclear if that’s true.

Call of Duty: Warzone Pacific is full of wild visual bugs on PlayStation

The 10 best Call of Duty: Vanguard weapons to level before Warzone Pacific

The best Combat Shotgun loadouts in Call of Duty: Vanguard