The 104SH oozes Japanese design sensibility, from the austere front panel to the sharp corners and curved back plate similar to that of phones like the Panasonic Eluga and Sony Xperia S. The 4.5-inch display predictably dominates the front of the device with a minimal bezel, though there's space for three capacitive buttons towards the bottom. Like the Xperia S, the display is almost indistinguishable from the bezel when switched off, giving it a sleek, monolithic feel. The design is fairly conservative but doesn't come off as bland, and that's largely due to the color options: Sharp has made the phone available in black/white and blue/black models as well, but my unit comes in metallic blue with an orange trim, a combination patriotically labeled "Rising Sun" by the manufacturer. It sounds unusual, but doesn't look too gaudy — you only see a tiny sliver of orange when you're looking at the phone head-on, and the blue is dark enough not to distract. I like to see phones (and consumer electronics in general) break out of the plain black plastic paradigm, and Sharp has done so in style with the 104SH.

Business at the front, party on the sides 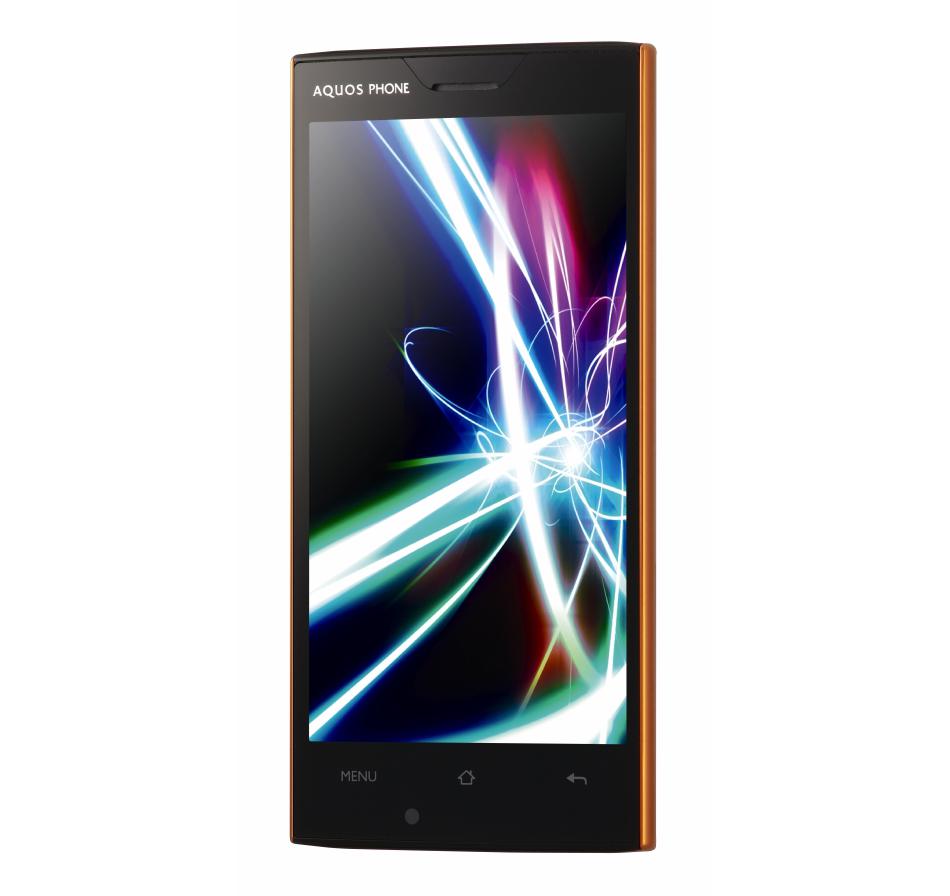 At 8.9mm (0.35 inches) thin and 126g (4.4 ounces), the 104SH is surprisingly airy in the hands — it's about as light and portable as I could hope for from a device with a 4.5-inch screen, and it slips nicely into slim pockets. The flipside of this is that the phone feels a little cheap in some areas, with the glossy plastic back panel picking up fingerprints and feeling like it's going to snap in two whenever I take it off. Unusually for such a thin phone, the 104SH has a removable battery and expandable microSD storage, which stops it feeling quite as solid as certain competitors. The sleep / wake and volume buttons are similarly a little flimsy, though all are easily reached with your thumb when the phone's in your left hand and your index finger when it's in your right. There aren't any other physical buttons on the device, though there is a loop just above the volume key for attaching charm straps, which is more or less an essential feature for Japanese phones. Another nice touch is the notification LED below the capacitive buttons, which as far as I can tell glows a different color based on the relevant app icons — Facebook is blue, while Asian messaging services Line and Kakao Talk are green and yellow respectively.

Inside, we're looking at the same dual-core TI OMAP 4460 CPU as found in the Galaxy Nexus (though here it's clocked to 1.5GHz rather than 1.2GHz), 1GB RAM, and 16GB of internal storage together with a 2GB microSD card as standard. What you won't find is a 1seg TV tuner, an infrared port, or any form of NFC. The former two aren't particularly missed — 1seg is little more than a battery-sucking way to watch bad terrestrial TV in 320 x 240, and infrared data transfer is becoming increasingly irrelevant even here — but the lack of NFC is genuinely puzzling. Japan has had FeliCA infrastructure in place for many years, and even most non-smartphones in the country support the feature, with millions of people using it on vending machines or train ticket gates every day. The first Japanese phone to run on Ice Cream Sandwich would seem like a perfect opportunity for Google Wallet to proliferate in the country, but it was not to be. In an interview with Keitai Watch, Sharp said that these features were left out in order to ensure that Android 4.0 was ready in time for the device's release — I'm not entirely convinced by the connection, but in any case the company says it plans to release phones with such functionality again in the future.

One perennially Japanese feature that did make it to the 104SH is water resistance, and the phone has three ratings that cover various levels of exposure to moisture and dust. IPX5 means it should be able to stand up to 12.5 liters a minute from a three-meter distance for three minutes, IPX7 allows for 1-meter submersion in lukewarm water for half an hour, and IP5X means it can withstand up to 75 micrometers of dust for eight hours. However, the manual says the certifications don't cover harsher materials like cooking oil or sand. While the dainty nature of the phone means you may not want to test your luck with any of these parameters, it should at least give some peace of mind when you need to make a call in the middle of a downpour. This functionality isn't anything special among Japanese phones, but it's unusual to see in high-end devices from elsewhere.