Last year's Motorola Moto 360 ($179.97 at Amazon)was, somewhat by default, one of the best smartwatches we reviewed at the time. Since then, the market has grown to include more competitive options like the Apple Watch ($179.97 at Amazon)and the Pebble Time ($179.97 at Amazon) . The new second-generation Moto 360, starting at $299.99, is Motorola's attempt to stay on top of the wearable pack. It looks better, lasts longer, and feels more comfortable than its predecessor. But it's more expensive, its heart rate monitor isn't reliable, and Android Wear still isn't a very user-friendly operating system. The 2015 Moto 360 is a sstep up from last year's model, but the times are changing, and Android Wear can't keep up.

You Can Trust Our ReviewsSince 1982, PCMag has tested and rated thousands of products to help you make better buying decisions. (Read our editorial mission.)

You can customize the new Moto 360 using Motorola's Moto Maker website. Everything from the strap to the bezel, to the case, can be personalized to your liking. You can order the watch with a leather or metal strap in black, brown, or gold; a case (the base of the watch that the bezel sits on top of) in black, gold, or silver; and a smooth or textured bezel in black, gold, or silver. Each Moto 360 has physical lugs that allow wearers to swap between leather, metal, or any other 22mm bands they please. The different choices can affect the price. For example, selecting the larger version adds $50 to the base price of $299, while choosing the gold color for the case is another $30.

$89.00See It at AmazonRead Our Fitbit Charge HR Review

New to the second-gen Moto 360 is a physical crown located at the two o'clock position on the watch case. It's in this position, rather than the traditional three o'clock one, so it doesn't get accidentally activated. You can press the crown to activate the watch face if it's set to turn off, or hold it down to immediately access the Settings menu. It's a nice addition that makes navigating Android Wear a little faster. 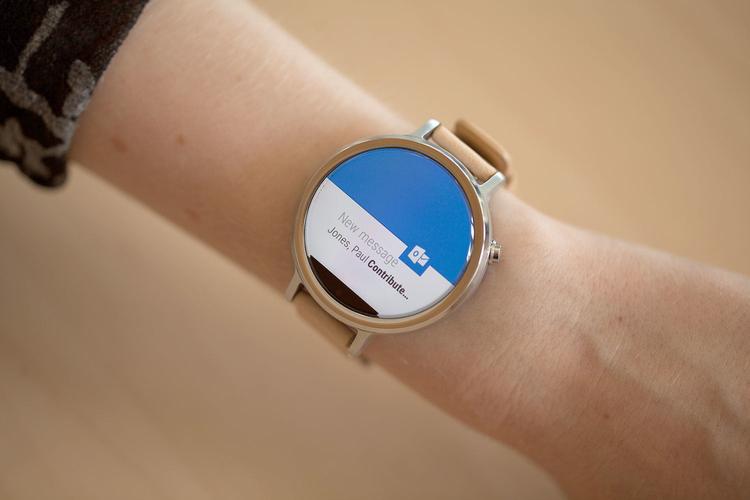 I reviewed the large 1.81-inch version of the watch with a silver bezel and case with a brown leather band. It's far more attractive than the LG Watch Urbane ($179.97 at Amazon) , especially when you consider the high-quality leather band. It definitely lends the timepiece a classic, premium look, and it didn't immediately gain stress wrinkles as soon as I used it, unlike the Watch Urbane. It's comfortable too, despite its size. I frequently forgot it was on my wrist.

That said, the Moto 360, like most smartwatches, has a number of health and fitness-tracking features (more on those shortly), so I can't see the leather strap being useful for sweaty workouts. Of course, you can swap the strap out, but the process of stripping the lugs and swapping bands takes more time than you'd probably like to spend before and after every workout.

On that note, the Moto 360 is rated IP67, so it can survive immersion in up to three feet of fresh water for 30 minutes, but it isn't fully waterproof, so you can't take it swimming. And if you're wearing the leather band, you'll probably want to keep it away from water altogether.

Display and SetupThe large Moto 360 uses a backlit 1.56-inch LCD with 233 pixels per inch, covered in Gorilla Glass. It's sharper than the original Moto 360, but it's not as bright or as sharp as the Apple Watch, which boasts over 300 pixels per inch. Nevertheless, the screen looks good, it can be seen in direct sunlight, and its brightness can be adjusted to save battery life. It also uses an ambient light sensor to change screen brightness depending on surrounding light.

There are a couple of annoying things about the display, though. Because of the way the glass is cut around the edge, there's a prismatic effect that gives off rainbow-colored striping all around the perimeter of the watch face. It doesn't stand out, but once I noticed it, it became highly distracting. This also creates something of an aquarium effect for any images that appear at the margin of the screen—they look wavy when they hit the edge.

The other issue is a sliver of black, empty space that cuts off the bottom of the display. This is where the ambient light sensor is located. While I appreciate the light sensor, cutting off the display this way just isn't aesthetically pleasing. I'm surprised Motorola hasn't remedied this issue since the first model.

The Moto 360 can be paired with Bluetooth 4.0 devices running Android 4.3 or later, and, thanks to a recent update to Android Wear, with devices running iOS 8.2 or later. To start, you need to download the free Android Wear app on your mobile device. After that, it's just a matter of following the simple on-screen instructions. I paired the Moto 360 with a Samsung Galaxy S6 ($179.97 at Amazon)and an Apple iPhone 6 ($179.97 at Amazon)with no problems.

Features, Performance, and Android WearThe Moto 360 has an accelerometer, an ambient light sensor, a gyroscope, proximity sensors, and a heart rate sensor. There is no GPS, like the Sony SmartWatch 3 ($179.97 at Amazon) .

The Moto 360's heart rate sensor requires you to sit still to work, so it can't track your heart rate while exercising, and I found the results to be inconsistent. I would sit still, calmly breathe, and net a heart rate number in the low hundreds, which couldn't possibly be accurate.

The pedometer here is about as accurate as on other watches I've tested, like the LG Watch Urbane and the Pebble Time, but if you're really serious about your workouts, you'll want to go with a dedicated fitness tracker like the Misfit Flash Link ($179.97 at Amazon)or the Fitbit Charge HR ($179.97 at Amazon) .

You also get notifications from text messages and social media, and the ability to dictate replies with your voice. However, the Moto 360's voice recognition still needs work. It's inconsistent at best, even when using "OK Google" to open apps. Plus, you still can't read full texts or emails on Android Wear. Instead, it offers to open the message on your phone, which, I think, kind of defeats the purpose of having a smartwatch on your wrist in the first place.

Sporting 512MB of RAM, 4GB of internal storage, and a 1.2GHz quad-core Qualcomm Snapdragon 400 processor, the Moto 360 feels quite snappy. Unfortunately, the Android Wear OS itself is bogged down with lots of sliding through Google Cards by way of a vertical UI that makes navigation sluggish, no matter how fast your hardware. So if you want to get to a fitness app to start a workout, or even to the Weather app to check the temperature outside, be prepared to swipe, swipe, and swipe some more through vertical lists.

One welcome improvement is the addition of Live Dials. Live Dials are basically shortcuts on the face of the watch that give you quick access to up to three of your favorite apps. However, not all watch faces have Live Dials. So far, I've only seen a few that do, and they're all analog-style.

As for battery life, Motorola promises over one day's worth of usage, but I found that I still needed to charge it nightly.

ConclusionsThe second-gen Moto 360 is very much two steps forward, one step back. The screen is large and sharper than last year's model, but the same imperfections remain. Battery life is slightly longer, but you still need to charge the watch nightly. You get a heart rate monitor, but you can't trust its results. And Android Wear has slightly improved with Live Dial shortcuts and iOS support, but you still need to sift through vertical lists to access most applications.

The new Moto 360 is an improvement upon its predecessor, but just barely. At this point, the Apple Watch ($179.97 at Amazon) , the Pebble Time, or the original, inexpensive Pebble ($179.97 at Amazon)are your best options for getting into the world of smartwatches. The original Pebble gets you get a suite of useful apps, instantaneous notifications, and it works on both Android and iOS. The Pebble Time adds a color screen, better battery life, and impressive voice-to-text functionality that actually works. If you prefer a traditional round form factor, then keep an eye out for the Pebble Time Round, which starts shipping in November. Then there's the Apple Watch, which only works with iOS devices and costs more than either Pebble or the Moto 360, but it boasts the slickest design of the bunch and the best third-party app ecosystem.